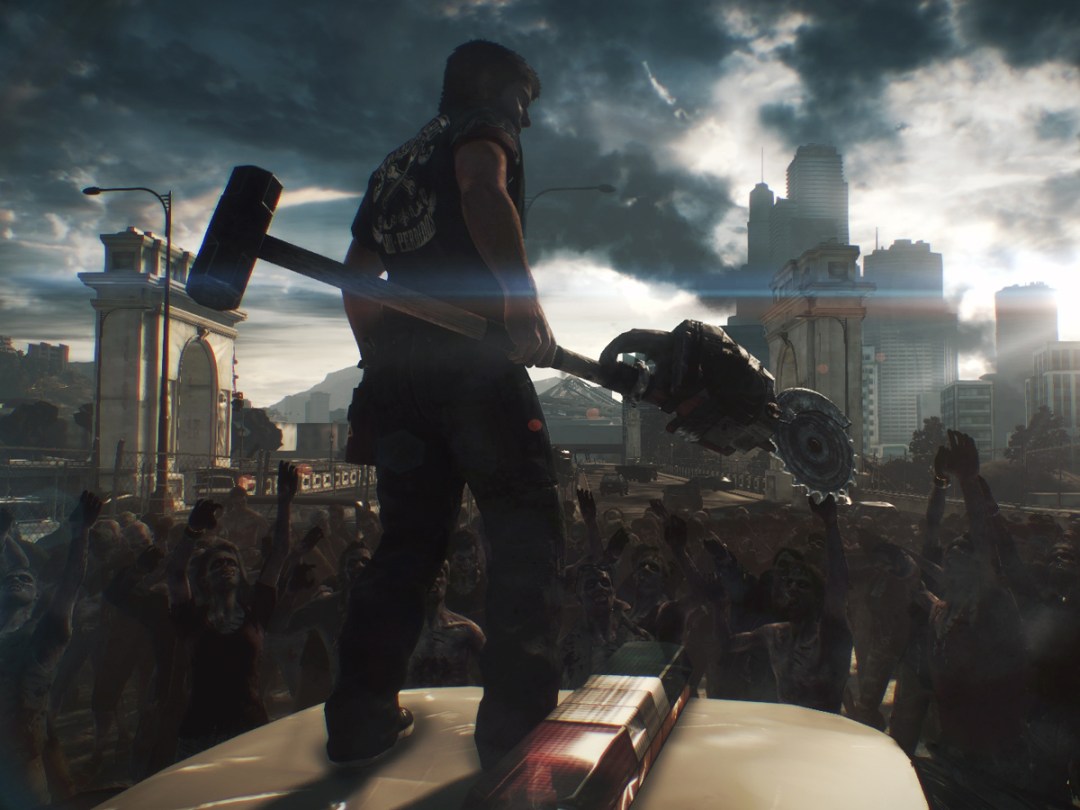 Fed up of zombies yet? Capcom’s hoping not, because its big launch title for Xbox One is Dead Rising 3, the zombiest of zombie games.

The shuffling undead swarm over highways and into tunnels, fly into the air impaled on fireworks (really), and cling to your car as you hurtle around the streets of the city of Los Perdidos. You’ve seen zombies in games before, but never as many as this, and there have never been so many weird and wonderful ways to relieve them of their limbs. It’s undeniable fun, but is it lasting fun? And is it a worthy next-gen launch title?

Dead Rising 3’s big new feature is that it offers hundreds of zombies on screen at once – three times the number of the Dead Rising 2. With so many undead corpses roaming the streets, it makes the world of Dead Rising feel, somewhat ironically, more alive. Zombies are deadly to deal with en masse, so early on you need to avoid them, and as you progress, you can start to build machines to take them down.

The increase in zombie numbers has also had other knock-on effcts on the structure of Dead Rising 3. It’s much more of an open world game now, with the city of Los Perdidos based on Los Angeles and split into four areas connected by freeways. The story is therefore less directed than before, with lots of side missions to distract you, and thankfully the series’ countdown clock has been banished to facilitate this freedom, which was an annoying feature of the previous games.

Customisation in a zombie nation

One of the best things about Dead Rising 3 is its customisation. You can combine weapons by finding blueprints around the world, which are usually conveniently placed next to the items you need to build them. For example, you can perform a Dragon Punch by piecing together a motorbike engine and boxing gloves. Main character Nick Ramos even screams “Shoryuken!”. You can also build a gun that fires sex toys, which get stuck into various parts of the zombies’ procedurally generated bodies. Childish, but we challenge you to not chuckle. As with previous Dead Rising titles, it’s a humorous game in which the funniest stuff usually comes from just mucking around.

Vehicles are also customisable, and doing so not only helps you in getting around the city – they’re also effective zombie killing machines. Take the RollerHawg, for example, which is a motorbike that’s adorned with spikes and flamethrowers. The customisation doesn’t stop there – you can also make potions that allow you to do things like breathe fire and become immune to zombie bites.

Dead Rising 3’s story takes place around a decade after the second game. You band together with the survivors of a zombie outbreak to try and build a plane to escape, before Los Perdidos is flattened by an airstrike from the military. You run around and help people on missions, and if you keep them alive, they’ll then pop up at safe houses and give you supplies.

The story is interesting, but it goes for more gritty realism than previous games and is therefore less charismatic as a result. The game clearly wants you to explore the world and take part in side missions, as the main story missions are dotted about at opposite ends of the map. We like that Nick Ramos is a faster protagonist than before – he’s able to run around and pick up objects and weapons on-the-go, which makes him much better equipped to deal with the increase in zombie numbers.

The boss battles are the main frustrations in the game – they require you to learn attack patterns like most boss fights, but the controls feel too clunky, and they’re overly difficult. We also dislike the implementation of motion controls. If you’re caught by a zombie, you have to physically shake the controller to get them off.

Dead Rising’s hordes of zombies impress on a technical level, but it’s frequently at the cost of framerate, which drops dramatically when there’s a lot happening on screen. In fact, we’d say that Dead Rising 3’s overall graphical presentation leaves a lot to be desired – textures are flat, effects are minimal, and the 720p resolution video output feels distinctly last-gen. If you want a new game to really show off the power of your new Xbox One, we’d recommend Forza Motorsport 5.

One feature that does impress, though, is the game’s use of SmartGlass. If you link up a smartphone or tablet, you can receive phone calls from within the game directly to your device. You can also use the second screen as a map to order in airstrikes, which is good if a second player wants to help out. The story is also completely playable in co-op multiplayer, with vehicles sporting a second seat for your buddy when moving about.

Dead Rising 3 is a great rejuvenation of a classic series – it preserves the horror and humour of the previous games but places it in a new open-world environment that encourages experimentation.

It’s fun to build a variety of zombie-killing machines, follow the story and side missions, and generally play around with the myriad weapon combinations, but there are a number technical disappointments, with the game not looking particularly next gen overall. The boss battles and motion controls have the propensity to frustrate, too.

Overall, this is another strong entry into the Dead Rising franchise, and is a fun choice if you’ve bought an Xbox One at launch and want some zombie-slicing action in between races on Forza 5.

Zombies swarm in their hundreds

Ropey framerate and only 720p