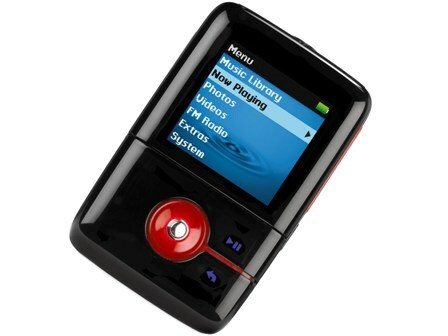 Creative’s MP3 player finds itself bang in the middle of Nano territory – the “even better than the original thing” Apple is the sales leader in this portable category and, on first impressions, the Zen V Plus could struggle to compete. Up against the iPod this plasticky effort feels a bit like baby’s first MP3 player.

Get past the lack of “look what I just slid from my pocket” appeal and there’s some welcome reverse psychology going on: the plastic casework makes this machine less of a target for that terrorising gang of ASBO’d eight year olds, and you worry less about protecting it from the scary world of MP3-case annihilating enemies, such as sets of keys and angular fifty-pence pieces.

More than just a psychological bonus is the Creative’s small chassis – it’s no bigger than a Zippo lighter – and the Zen V Plus slips easily in to the tightest pocket of your skinniest (so last year, by the way) jeans. At 44g, it’s not the type of player to hold you back when you want to travel light.

There’s nothing lightweight, however, about this machine’s feature list. Video replay is available, plus there’s a line-in for recording from external sources, such as CD players. There’s even a voice recorder, useful for journalists and weirdos.

Talking of weird journalists, the Stuff review team was split on the ‘Plus’s user system: some lauded its little joystick, while others, primarily those with fat butcher fingers, found it tricky. Overall opinion is the system works well, but you should give it a prod before you part with your greens.

Don’t fret about double-checking the Creative’s sound delivery, this MP3 machine blasts out tunes with attitude, rivalling the Nano for get up and go. The bundled buds help matters, offering above-average sound quality, as well as a snug fit.

Load some vision and the screen is fine for music videos but it’s not the sort of set-up you’d want to use for a quick game of “spot the minute detail in the dark and dingy movie scene”. Contrast could be better, too, meaning the screen can look a little washed out when watched in brightly lit surroundings.

As you would expect from a portable that doesn’t emanate from California, this Creative doesn’t embrace purchased iTunes, but it’ll happily chew on MP3 and WMA so no major issue there. The bundled software is decent, or you can just stick to Windows Media Player.

Battery life, at 15hrs, isn’t class-leading, but unless your joining a Virginal beard-face on a round-the-world balloon flight, the Zen V Plus should easily get you from A to B.