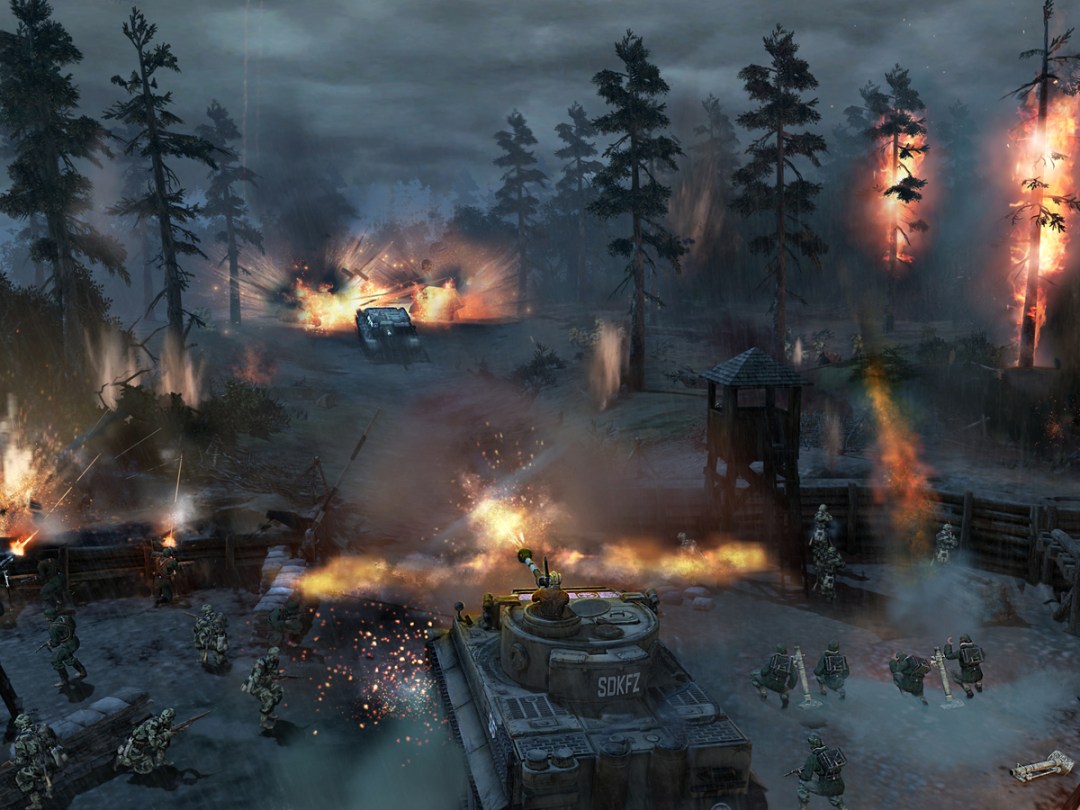 Company of Heroes set the standard for real-time strategy and now, after a seven-year hiatus, the sequel has arrived. The follow-up shifts the war-game action to the Eastern Front, kicking off in September 1941 with German Panzers closing in on Moscow and following events right through to the fall of Berlin in 1945. But has it been worth the wait?

Company of Heroes 2 might be out to make armchair generals of us all, but it’s no slacker when it comes to historical accuracy. The Eastern Front’s bitter and desperate conflicts are backed with sights and sounds that bring a dose of brutal reality to the game’s miniature battlefields.

Troops freeze to death in icy winds, explosions shatter buildings and the wounded crawl around the dark steppe landscape in agony. It’s far removed from the gung-ho jingoism that many war-themed games resort to. War is hell, and it’s to the game’s credit that while providing plenty of entertainment it never lets you forget that.

While the series has swapped battlefields, the action doesn’t stray far from the original’s formula. It’s still a wondrously deep slice of real-time strategy, where resource management hassles take a back seat so that you can focus on the cut and thrust of battle. There’s room for all sorts of tactics to be employed, from erecting barriers of barbed wire to commandeering anti-tank guns and calling in artillery strikes, and it’s this choice and flexibility that makes Company of Heroes 2 a startlingly good strategy game.

Company of Heroes 2 is also generous, packed full of different ways to play. There’s a solo campaign charting the story of the Eastern Front through the reflections of a former Soviet general for starters. Then there are 18 further co-op and solo missions to fight through in the Theatre of War mode. The missions are varied, too.

One moment you’ll be carrying out a sniper assassination, the next you’ll be leading a fraught fight back in blinding blizzards. On top of all that, there’s the online skirmish mode where you get to test your military chops against the wider world.

While Company of Heroes 2 sticks to the series’ tried and tested formula it does throw in two notable additions. There are new snowy weather effects, which can alter the course of battle by slowing movement and reducing visibility, and the game also ditches the usual fog of war approach in favour of only revealing what is in each unit’s line of sight. Both are decent additions that add to the sense of realism, but neither transforms the experience.

Yet for all its tactical flair and attention to detail, Company of Heroes 2 does misfire on several fronts. The unintuitive interface makes for a steep learning curve for newcomers to the series – a problem exacerbated by the lack of a decent tutorial. Some of the controls could be better, too, not least the process for merging units. The path finding abilities of the units is another disappointment. Troops regularly end up heading into the line of fire to reach a location rather than taking the safer route you wanted them to use.

Company of Heroes 2 doesn’t mess with the original’s winning formula and its deep strategy action is hugely rewarding – once you overcome the steep learning curve and learn to live with the wayward path-finding of the units.

So what do you think? Are you disappointed by the lack of innovation or chuffed that Relic hasn’t messed with the Company of Heroes formula? Let us know below….