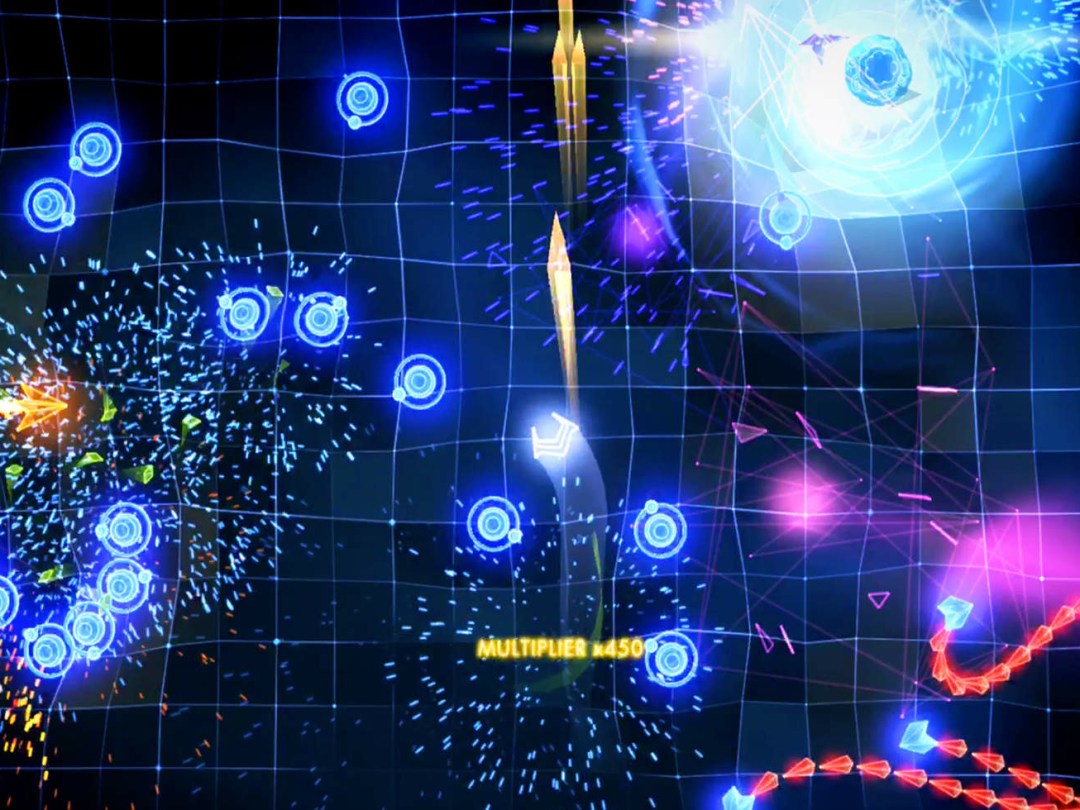 There’s a chance you might sit there with Geometry Wars 3‘s neon fireworks in front of your face and ‘meh’ that you’ve seen it all before.

If so, you’re probably a miserable soul who shouldn’t really be playing videogames, because Geometry Wars 3 is glorious.

On the surface, it’s still the same Robotron-inspired twin-stick shooty action that arcade fans have loved since the very dawn of the series. You zoom about claustrophobic arenas, blowing away all manner of kamikaze geometric shapes that seem to really have it in for you. Sparks fly. Things go BOOM.

However, as its sub-title suggests, this entry isn’t all about flat arenas: it now wants something more three-dimensional to wrap itself around.

This becomes apparent pretty quickly in the 50-level ‘Adventure’ mode, where you start out in standard twin-stick fare before suddenly finding yourself frantically fighting a boss across the walls of a huge box that flips about in the void, or attempting to survive a seemingly endless onslaught of neon beasties multiplying across the surface of a giant space peanut.

This is all initially disorienting and dizzying, even if conceptually the notion of not being able to see the entire arena has been at the heart of Geometry Wars since the very beginning. Along with merely dazzling, though (and this is a visually stunning mobile title), the various arena shapes you have to contend with force you to quickly devise new tactics on the hoof, unless you fancy being turned into so much space dust.

Naturally, the Geometry Wars score multiplier’s in full effect throughout, incremented via the collection of geom diamonds; you’ll gleefully watch scores in the piddling thousands balloon into the multiple millions. But you also now have the option to buy and upgrade bolt-on kit.

There’s no IAP, meaning you’ll have to grind a bit to get the good stuff, but the game’s so replayable that this is effectively a plus point.

If you’re very old, grumbling about ‘these kids and their new-fangled depth’, and wishing a previous version of Geometry Wars was available for mobile, you get that too. Five modes exist, based on classic versions, including the standard three-life Evolved and the no-guns flee-or-die Pacifist.

Whatever mode you fling your thumbs at, the game looks fantastic, sounds great, and has pitch-perfect controls. One of the best bits is auto-fire, which can be over-ridden at any point, but that means when your thumb darts for the smart-bomb button, any nearby neon nightmares probably won’t kill you in the face.

So there you have it: console-quality gaming on your Android (or iOS device), that’s dead simple to get into but tough to master, and at a third of the price you’d pay on ‘proper consoles’. It’s a blast! (Sorry.)

Loads of challenges to tackle

Plenty of variety in game style