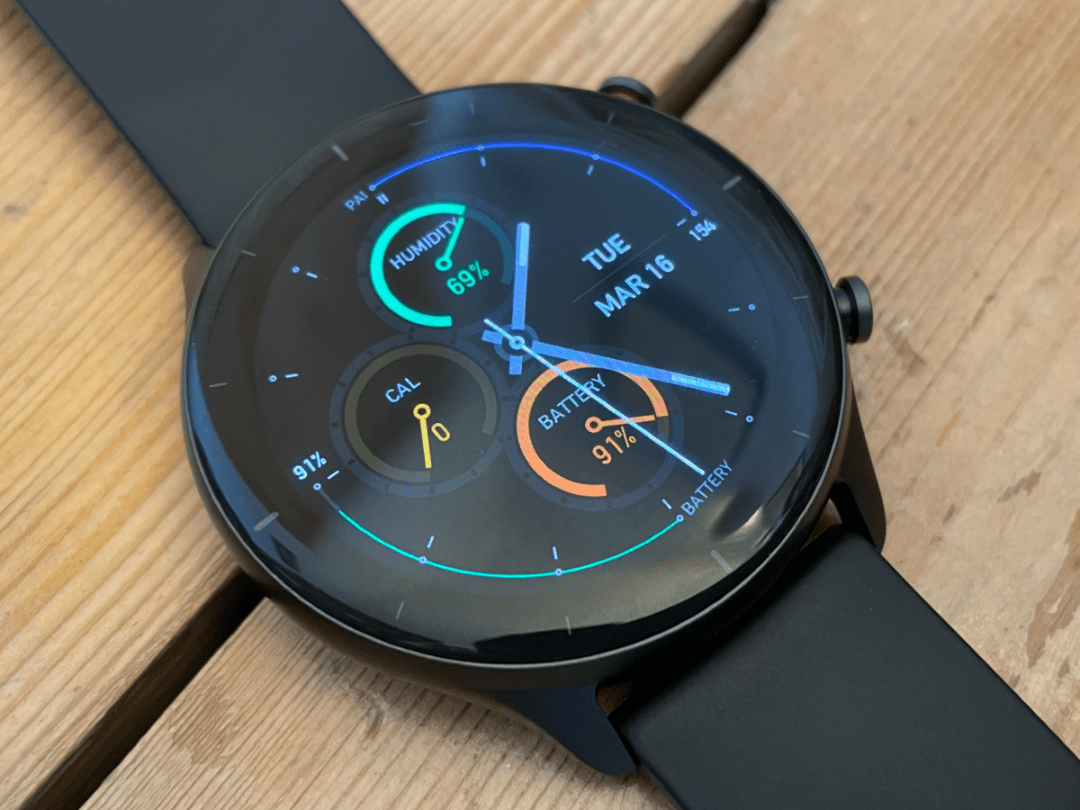 When you see that Amazfit only wants £120 for its GTR 2e smartwatch, the natural reaction is to look for a catch.

What you’ll find instead is a feature list that looks like it belongs to a much more expensive product, with an always-on screen, SpO2 and temperature sensors, and promises of absolutely whopping battery life. Still, there must be compromises somewhere, right?

The ‘e’ stands for Essential – but can this budget smartwatch possibly live up to its name? We wore one for 10 days to find out.

With its aluminium alloy case and 1.39in circular AMOLED display, the GTR 2e does a fine impression of a much more expensive smartwatch.

The slight giveaway is the very plain 22mm silicone strap, which, while very comfortable to wear, looks a bit like something you’d get on a £20 Argos job. The 2e’s strap is also available in Slate Grey and Matcha Green, which are a slight improvement, but our issues with it aren’t purely aesthetic. The end also has a slightly irritating habit of working its way out of the loops that are supposed to stop it flapping around, but the widely used quick-release pin buckle fastenings mean it’s an easy job if you decide to replace it with something a little fancier.

On the right-hand side of the case you’ll find two buttons, which spin around but can’t be used to scroll through the menus. Push the top one and you’ll be shown a list of the 2e’s functions, including music controls, heart rate and SpO2, temperature, and PAI, which is Amazfit’s own health-monitoring system. The bottom one is customisable but is set by default to bring up the long list of activities the watch can track.

Swiping from each side of the screen will take you to various menus and dashboards, which are easy enough to get the hang of. Using your finger to scroll through the options is generally quick and responsive, although there’s a bit of lag when drilling down into activity stats. Selecting some of the smaller icons accurately could also be a bit on the fiddly side if you’ve been skipping finger day down the gym.

The 454×454 screen is bright, sharp and easy to read, though, and while there is a bezel surrounding it, it’s used for the hour markers so the display still feels nice and big. If you’d prefer something with a squarer face that you can try to pass off as an Apple Watch, Amazfit’s GTS 2e is practically identical from a functional point of view, although the battery life isn’t as good.

The GTR 2e uses Amazfit’s own operating system, which means it works the same way whether you pair it with an iPhone or an Android-powered one. Doing so is just a case of scanning the QR code that appears on the face when you first turn it on, although make sure you keep the watch on charge when updating the software or it’ll keep failing.

You’ll need Amazfit’s Zepp app to set things up and customise how the 2e works. It’s worth changing how long the display stays illuminated for and the order of the screens that you swipe left or right to access, otherwise notifications disappear a bit too quickly and the music controls are too many swipes away to be useful. The latter can only be done on the watch itself.

The GTR 2e gives you a fair amount of control over which apps you want to receive alerts from, although you can only read them – if you want to respond in any way you’ll need to fish out your phone, but nobody wants to write texts on a tiny watch screen anyway. Formatting on messages can be a bit wonky, although not to the point that the words are unintelligible, but it can’t display emojis, pictures or gifs, which might render some of your WhatsApp groups redundant.

While the Zepp app can be a bit slow to sync each time you open it, the language is sometimes slightly odd (it offers “warm tips”) and it’s not always immediately obvious where to find stuff, it’s a good way of digging through all your vital stats and making any changes that would be more fiddly on the watch’s smaller screen. There is a store within the Zepp app as well but you can’t install third-party apps to the watch itself, it’s just to download new watch faces. There are plenty to choose from, although it’s got to be said they lack the polish of Apple’s.

The fact that it doesn’t fully integrate with your phone’s OS means that the two devices aren’t always on exactly the same wavelength. For example, you’ll have to set a separate Do Not Disturb schedule on the watch, otherwise you’ll continue to get wrist-based notifications from your muted phone – not ideal if you’re trying to have a lie-in.

The GTR 2e is pretty feature-packed, especially considering its price. There are functions here that Apple left off the Watch SE, such as SpO2 and an always-on display, despite the 2e being less than half the price of Apple’s most affordable wearable.

The Amazfit’s always-on display is pretty crucial as the 2e doesn’t always respond to fairly deliberate wrist movement and you can’t just tap the screen to make it light up. With the time always visible, though, that’s not as big a deal as it could be.

The GTR 2e can track a whopping 90 different exercise activities, which would make quite the Olympic event, but on a few standard outdoor runs we found its accuracy to be a little off. While it’s very quick to lock on to GPS and the numbers are easy to read when on the move, it’s a bit generous on distance compared to a Garmin Forerunner 45 or Apple Watch SE, and the pacing info is pretty erratic. Heart rate measurement seems to be pretty consistent though and for Sunday runners who aren’t worried about their times being 100% accurate it’ll still do a job.

Amazfit claims the 471mAh battery is good for 24 days of typical use, although that very much depends on how you define typical. With the always-on display setting active we got just over nine days out of it, which included just under 105 minutes of outdoor running using the GPS, regular heart-rate checks, nightly sleep monitoring, and a hefty helping of SMS and WhatsApp notifications. As a rough guide, it would use about 10% of its battery every 24 hours.

Switch off the always-on display and adjust the frequency of the heart-rate readings and you’d get a lot longer out of it, but either way battery life is not a problem when wearing the 2e. A weekly re-up should be plenty.

With smart looks, a packed feature list, very practical battery life (if not quite up to Amazfit’s claims) and an impressive breakdown of your vital stats via the Zepp app, at this price the GTR 2e feels like an ideal introductory smartwatch – but there are significant caveats. GPS accuracy isn’t the best and general usability could be more polished.

At just £120, though, it should give you an idea whether the smartwatch life is for you or not without forking out too much dosh. Just don’t be surprised if you find yourself itching to upgrade before too long.

Works with iOS and Android

Vibration not the strongest