So it’s a fact – the next big thing after music mobiles will be sat-nav phones.

This is the Mio A701, the second GPS phone we’ve this week and a darn handsome Siemens-esque beast to boot.

Along with the GPS and Mio’s own impressive mapping software, the smartphone is one of the first to feature Windows Mobile 5.0 and its push email feature. The phone’s unlikely to earn the title of Blackberry killer, however, as it doesn’t have a keypad – you have to dial and type using the stylus or onscreen fingerpad.

The phone’s due before Christmas and we’re waiting to hear pricing details. Find out more in our November issue. 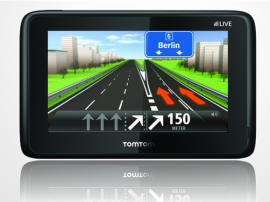 The Garmin-Asus collective has just released details of a second handset in their upcoming nuvifone range following details of the G60 earlier today.T