Early last year, all signs pointed to the Surface Mini being revealed at a big Microsoft event in May 2014. See that Amazon leak above? Just one of many rumours and reports. However, the event came, Microsoft showed off the Surface Pro 3, and then… no smaller tablet in sight.

What gives? At the time, we heard reports that Microsoft made a late call to cancel the showing just days before the event, with management deciding that it was one too many Surface devices – with the purportedly 8in Mini not doing enough to stand apart from the handheld tablet pack. And still, no official word from Microsoft, other than later admitting it didn’t ship “a new form factor.”

Until now. In a large feature article by Wired today on the creation of the new Surface Book laptop, there’s a little tidbit: a small acknowledgement that a Surface Mini really was produced. Panos Panay, Microsoft’s corporate vice president of devices, apparently kept one by his bedside for jotting down quick notes a couple years back – which is about when the Mini rumours first emerged.

"It was like a Moleskine [notebook]," he tells Wired. "It was awesome." Curious, then, that an "awesome" device wasn’t awesome enough to actually make it into stores. Wired says simply that it was "a small tablet his team built but never shipped," and there’s no further mention of its potential rebirth down the line.

Chances are we’ll never see the Surface Mini as it was originally designed – which isn’t to say that Microsoft won’t revisit a smaller tablet in the future. With the Surface Pro 4 and Surface Book, Microsoft is starting to make some truly beautiful devices, and a couple-year-old tablet design probably won’t cut it.

But the next one? Well, that might be something to look forward to, especially as Windows 10 scales so nimbly to all types of devices.

[Source: Wired via The Verge]

The brawniest Surface to date wants to do it all 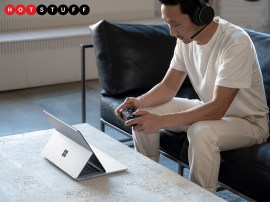