Laptops have long been thirsty beasts, consuming copious current through sizeable power adapters. While Anker’s Nano II wall charger won’t make your computer more efficient, it will banish that big brick from your backpack. Shipped in three performance flavours, Anker’s second-gen gallium nitride zappers are faster and more efficient than ever. Beefiest of the bunch is the 65W number (£40), which is capable of filling a USB-C MacBook in under two hours – yet it’s less than half the size of Apple’s 61W equivalent. Don’t need a new plug for your notebook? The 45W (£35) and 30W (£30) variants are even dinkier, but can still deliver rapid power to a range of devices, from your smartphone to your Nintendo Switch. So you can top up your stuff without stuffing your sack.

A power bank for your pad 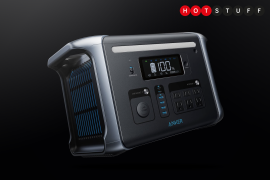