With the iPod now officially dead and buried, dedicated portable music players exist purely to please the ears of audiophiles. Sony’s latest Signature Series Walkman is unashamedly high-end, with a gold-plated chassis that’ll set you back more than some complete home stereo systems.

The catchily-named WM1ZM2’s body is made from 99.99% purity, gold-plated oxygen-free copper, which Sony says helps create a stronger digital ground for eliminating interference from other internal components. Even the solder used contains gold, which is supposed to be good for “improved sound localisation”.

Inside there’s a S-Master HX digital amp, which is hooked up to the balanced headphone port by a thicker Kimber Kable, like the eye-wateringly expensive DMP-Z1 music player. It’s all in the name of deleting distortion, and delivering the best possible sound quality.

It’ll play extreme bitrate formats including 11.2MHz DSD, 32-bit, 384kHz WAV and MQA audio, along with 96kHz FLACs, which puts most “high resolution” streaming formats to shame. The built-in battery is good for 40 hours of continuous listening, and there’s overhauled upscaling tech for when you’re “only” playing CD-quality 16-bit, 48hKz tracks. 256GB of on-board storage should be enough for a decent hi-res music library.

The Signature Series runs Android, with a 5in, 720p display and the same side-mounted physical controls as previous high-end Walkmans. There are two headphone ports (one balanced) and USB-C connectivity.

It’s available to order right now, straight from Sony, for £3299. You’ll need to supply your own headphones – and you’ll want some good’uns to truly appreciate the WM1ZM2’s sonic abilities.

There’s also a (slightly) more wallet-friendly NW-WM1AM2, which swaps the gold plating for an aluminium alloy chassis, drops the storage down to 128GB and uses an oxygen-free copper cable between its amp and headphone port. It’ll set you back £1299 direct from Sony.

Triple filtered, for your tech-loving pleasure 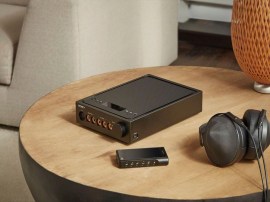