Although the animal kingdom’s ‘survival of the fittest’ rule doesn’t really apply to modern, human modern society, you get the feeling people need to be regularly reminded of it all the same. After all, we as a species have an unnerving tendency to barrel ahead, inventing metal destroyers and potential humanity-replacers without the remotest hint of self-preservation.

Today, robots can be considered a threat as much as a boon; they’re everywhere and — increasingly frequently — terrifying. Rarely does a month pass without some bright spark revealing a metal contraption that melds the Terminator with demons from hell.

Boston Dynamics was perhaps the company to forever still the notion of robots as sweet, bumbling automatons — bulky humanoids that needed an awful lot of help getting up some stairs. Realising bipedal robots weren’t cutting it, the company doubled down on alarming four-legged machines, able to outrun a Cheetah and scrabble across all terrain.

For reasons that must have seemed like a good idea at the time, BigDog was taught a new trick — not ‘sit’, ‘stay’ or ‘don’t kill all the humans’, but to hurl skull-crushing cinder blocks. (And, no, Boston Dynamics, you didn’t fool anyone into thinking your robots were somehow not threatening by dressing them in stupid furry reindeer antlers and having them pull a sleigh.)

The company is now owned by Google parent Alphabet’s X dept, which is entirely apt, what with that moniker sounding like a super-villain’s research lab. But Boston Dynamics isn’t alone.

The US Air Force has created barely detectable insect spy drones that can reportedly inject toxins into enemies, a Japanese tech company taught a robot arm Samurai smarts, to the level it can slice runner-beans in half, and France’s national computer science agency figured out how to make a six-legged robot bug adapt to – and compensate for – injuries inflicted upon it by said scientists.

The last of those is targeted at disaster-relief operations, not hostile action, but you can’t help thinking someone, somewhere, eyed that development with glee.

Perhaps, though, these are mere distractions, and the robots we should be more concerned about are hiding in plain sight. Last summer, a man was killed by a robot in a car factory; it grabbed him and crushed him against a metal plate. Earlier this year, a robot vacuum cleaner ‘attacked’ a sleeping woman, attempting to suck the hair off of her head, and she was unable to free herself. There were questions as to why the gadget could easily navigate cables, but not human hair still attached to a human head.

Of course, all of these concerns come back to humans being stupid. Robots, for the time being, do exactly what they’re programmed to. Until AI thunders into being, a vacuum cleaner attempting extreme depilation of a sleeping woman isn’t to blame, because whoever established its limitations and wrote its instructions prioritised avoiding cables over a human’s well-being.

And the same, more or less, goes for BigDog lobbing huge bricks about. But when robots can finally think for themselves, what examples will they have been set? You get the impression even artist Paul Granjon’s Mofo the disco-dancing robot might mull after grooving along to Patrick Hernández’s 1979 hit Born to Be Alive, “I was born to be alive. But I wasn’t born to share the stage with a squidgy human,” shortly before commanding its BigDog ‘pet’ to eradicate its creator.

Still, perhaps we’ll get lucky and any truly intelligent robots will catch a glimpse of the newly rebooted BBC show Robot Wars. Suitably inspired, they’ll duff each other into component parts, leaving them in no position to tick the following day’s task off of their joint calendar: “Take over the world.”

Humans will be left mired in the sheer hell of once again having to make their own cars and clean their own houses, but I’d rather have to do the vacuuming than end up being turned into something that needs vacuuming up.

Who needs R2-D2? These are our favourite plastic pals that are fun to be with 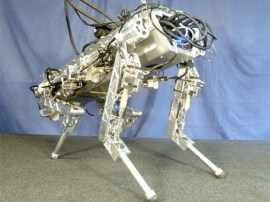