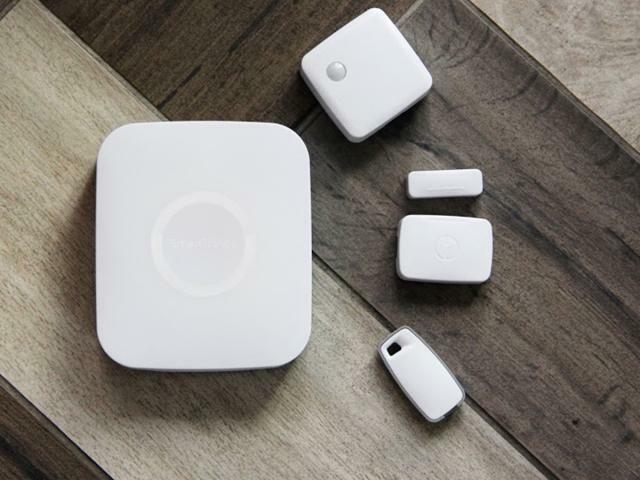 The smart home revolution is upon us. The giants of the tech world are turning their enormous, fiery eyes towards the peaceful idyll of your home. Armies of sensors are being prepared to occupy your kitchen, your front door and your downstairs loo.

Samsung is the first to throw its mighty hat into the ring, with this ‘smart home in a box’ pack, comprised of a hub, some sensors and a power switch. Unlike old-style home automation, this tech requires no rewiring: only the hub needs plugging in, and then everything just works, controlled by the app.

That’s the idea, anyway. But what can you actually do with it, and does it work?

You better Thing, (Smart)Thing about what you’re tryin’ to do

Setup is very straightforward: connect the Hub to your router, run through a few simple steps and you’re done. Then you need to connect your sensors.

There are three sensors in the box. The two-part Multi sensor can tell if a window, door or cupboard has been opened; the Motion sensor detect, you guessed it, movement; the Presence sensor is a key-fob-type thing that tells the Hub if you’re at home. There’s also the Power Outlet, which the Hub can turn on or off using commands from the sensors.

Adding Things to the system is simple. You remove the plastic tab, look for the Thing in the app and it’s added in one or two taps. The app will also suggest SmartApps for each Thing you add. Which is handy, because once it’s all set up you face your greatest challenge: figuring out what you want your SmartThings actually to do.

Something tells me I’m on to SmartThings, good

The obvious contender for a first SmartApp is the Smart Lighting function. Plug a lamp into the Power Outlet, pick this SmartApp and it’ll turn a lamp on when you open a door or walk past a sensor. I set it to use the Multi sensor, which I’d attached to my living room door, so that a lamp in the far corner of the room turns on when I open the door.

And because I don’t want that lamp on in the day, I also configured it only to run from an hour after sunset to an hour before sunrise. This was easy to set up and configure, and it’s pretty cool having a lamp that unfailingly turns on when you walk into the room. Unfortunately, to turn it off again I have to use the app.

The app is nice, but it’s also a bit fiddly. It needs a simple home screen with some big on/off buttons. To flick a lamp on and off, you have to pick the Things tab within the right room, then tap the button. That’s not a lot to do, but let’s not forget that you’re paying £200 for convenience, not for a more difficult light switch.

Adding a third-party Z-Wave device is surprisingly easy. I added the Yale Keyless Connected lock on my front door in a matter of moments, and now I can unlock my front door remotely using the SmartThings app. If someone was coming to stay, I’d be able to let them in from wherever I was. I don’t have any guests, though, so I make do with letting myself into my own flat a few times.

The lock can also now be set to trigger other actions, such as turning on a lamp when I get home, or turning off the coffee machine when I leave the flat. Or rather, it could, if the one Power Outlet that came with the kit wasn’t already employed in the living room.

Get up offa that (Smart)Thing

The SmartThings system is relatively open. It works with both ZigBee and Z-Wave, which means you can add a variety of smart light switches, built-in sockets and so on. It also works with the cloud-based If This Then That (IFTTT), which is more futuristic and possibly more useful, because so do things like Nest and WeMo products, as well as email and social media services. It takes a bit more fiddling to get SmartThings to turn on your Nest heating at the same time as your lamp, but it’ll do it.

You can also make your own SmartApps and share them, and some of the ones people have come up with show interesting potential for smart home kit. One, for example, works using motion sensors in the bedroom and bathroom of an elderly relative’s house; the automation will run if they get up in the night to use the loo, and send you a notification if they don’t get back into bed after a certain amount of time.

Cue you phoning your Nan in a needless panic while she’s trying to enjoy a midnight sandwich, but hey, it was nice of you to call.

In the box you have a Hub, three sensors and one plug. So that’s three input Things and one output Thing. The inputs can tell the Hub if a door has opened, who’s arrived home or which room they’re in, but the only thing the Hub can do with this information is to switch one plug socket on or off.

However excited you are about smart home tech, £200 is a lot of money for three extra ways to turn a lamp on and off. It would be nice to see some more power switches, but as it is you’ll need to buy them at an extra £45 each.

The thing people find useful about smart home kit is that it does a physical task they can’t be bothered to do themselves, like tweaking the thermostat or turning lamps on. If Samsung wants to get people really using this stuff, it will need to offer more of these physical actions: simple robot blinds, easy automatic plant watering, and so on. They’re harder to make than repackaged smartphone sensors, but they’re also more useful.

So, while SmartThings is some of the best, simplest smart home kit we’ve used, this pack isn’t well thought out. It adds a bunch of new sensors but it doesn’t offer that many options for things to do, beyond switching a light on and off.

As such it’s not so much a Smart Home In A Box as a demonstrator kit for people who want to try this sort of tech without doing any rewiring. It’s fun to use and it works well, but as yet there’s no super-useful reason to buy the Starter Kit.

Best of the best › The top smart home devices

Samsung’s SmartThings is a good enough kit for a smart home beginners, but it can’t do all that much at the moment