There’s a whiff of nostalgia as I free the Raspberry Pi 400 from its cardboard confines. Being a computer inside a keyboard, it’s part 1980s throwback, recalling the halcyon days of the C64, ZX Spectrum, BBC Micro and Commodore Amiga. But this is no chunky contraption — instead, the device resembles a modern (if cheap) PC keyboard with a Windows key swapped out for one with a Raspberry Pi logo.

Eagerly, I attempt to connect the computer to a swanky mobile display I bought specifically for this test — before realising the Pi uses micro HDMI and ships with a cable that has standard HDMI at the other end. My display, natch, demands mini HDMI. Rats. My 22in office TV frantically waves from the subs bench — and this is arguably how the Pi 400’s intended to be used anyway: plugged into a telly.

Now feeling suitably old school, I fire up the Pi 400. Immediately, it asks to download a huge software update, seemingly believing itself to be a PlayStation 400. Several minutes of thumb-twiddling later, I’m asked if there’s a black border around the desktop. Yep, I say. Restart! Now the desktop’s cut off. Argh! Another trip to settings, another reboot, and everything’s finally ready to rock.

You might question mentioning such gripes, but they are part of the Pi experience. This device is plug and play, with a form factor far more immediate than a vanilla Pi, but its Debian-based Linux OS is a world of faff compared to macOS or Windows. However, that’s countered by what you can do with the unit. For a taster, I spend an afternoon exploring built-in software and delving into the Official Raspberry Pi Beginners’s Guide. This chunky tome — like the Pi 400 itself — is a fusion of old and new, welcoming you to the platform and providing ideas on how to make the most of it. It’s a far cry from a device that ships with a pamphlet that explains how to turn the thing on — and then abandons you.

The Pi Foundation suggests using this computer as a ‘daily driver’. It fast becomes apparent the Pi 400 is no speed demon. Compared to my iMac, it lags in a big way. But for the price of Apple’s cheapest Mac, you could buy seven(!) Pi 400 starter packs, and the unit’s performance rivals a Chromebook’s. When being productive, LibreOffice does the job, as do browser apps like Sketchpad and Polarr. For downtime, Chromium won’t play Netflix, but I find a simple workaround at blog.vpetkov.net.

Much of the bundled guide wants to get you coding. Its tutorials ease you in gently and are reminiscent of 1980s computer manuals, which urged you to create rather than consume. Two pathways are suggested — Scratch (a drag-and-drop block-based visual language) and Python. The keyboard is a bit cheap and spongy, but works fine as I create basic games in Scratch and insert rude words into Python tutorials. Because I am five.

Spin the Pi 400 around and you’ll see its ports, including a 40-pin GPIO. This allows you to plug in various bits of hardware. I experiment with HATs — an LED matrix; a samples pad — triggered with Python scripts. HAT stands for Hardware Attached on Top, but since the port’s at the Pi’s rear, plugging HATs in directly isn’t an option if you want to see what you’re doing. A GPIO extension cable or Flat HAT Hacker helps, but both solutions prove awkward; still, I’d sooner have the GPIO port than not.

Like all Pis, the OS for this one lives on a Micro SD card. Shutdown, swap the card, reboot and you have an entirely different machine — or, with Retropie or Batocera, machines. This software emulates a raft of hardware and the Pi’s powerful enough to run many classic systems. And with the keyboard-oriented form factor, you can move beyond arcade games, to play old text adventures or mess around with DOS and BASIC.

Over a week in, then, I’m finding this Pi’s best thought of not for work (or your kid’s homework) but for what you can turn it into. For under £100 (or £67 for just the main unit), it’s an affordable standalone programming rig, hub for electronics, and stashable device that can become any classic home computer in seconds.

It’ll never be your main PC, but for hacking around and exploring computing’s past, this Pi is superb.

Powerful enough for a range of tasks and emulation

HAT use annoyingly awkward due to GPIO port position 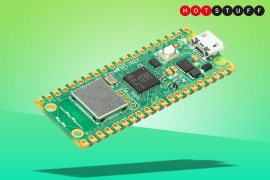