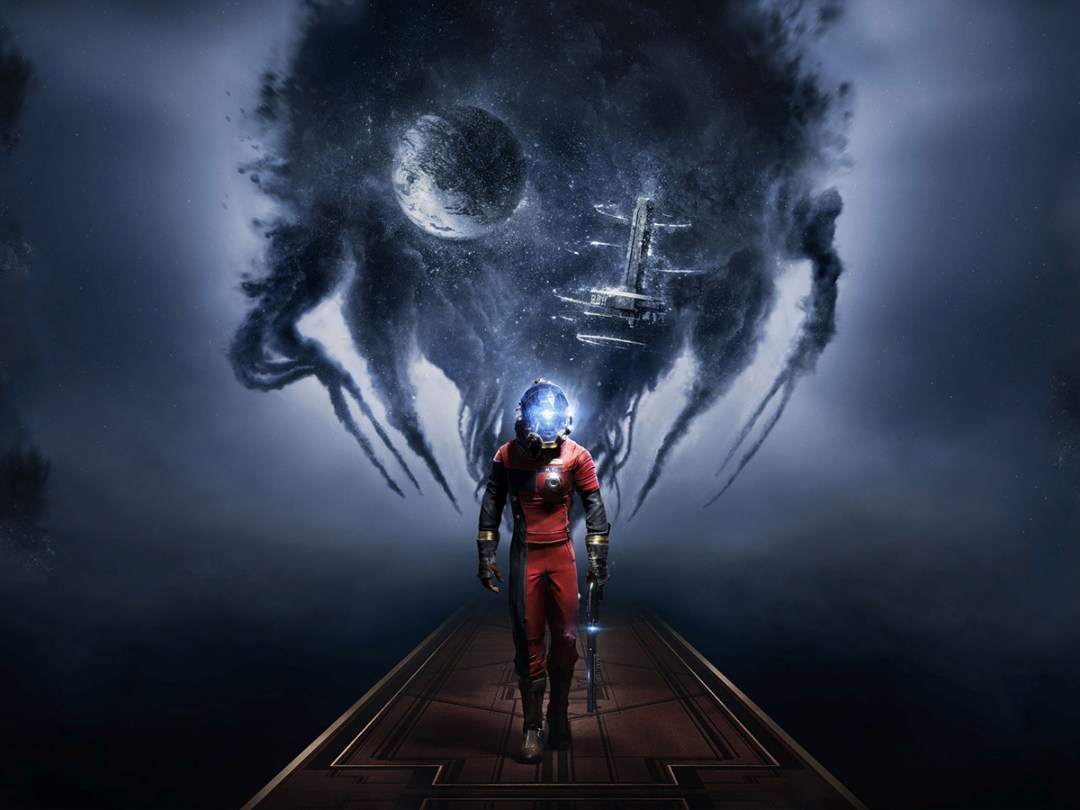 Those facehuggers from the Alien films – pretty scary, right?

Now imagine that when they’re not only trying to jam tentacles down your throat, but they’re camouflaged as the innocuous-looking office chair you’re sat on, too.

Or the simple coffee cup you’re drinking out of. Or literally any other object in the room.

That’s what makes Prey‘s mimics, vicious aliens that look like oozing black starfish, so terrifying. They could be anywhere around you, just waiting to pounce.

Not something you want to run into on a good day, then – and it’s not as if protagonist Morgan Yu was having a particularly good day to begin with.

SIDE EFFECTS MAY INCLUDE…

OK, so maybe sticking untested medical experiments directly into your eyeballs on a daily basis isn’t so bad, when it comes with a penthouse apartment overlooking a near-future San Francisco.

Or rather it wouldn’t be, if any of it were real. You aren’t really on earth, though, and those experiments just went very, very wrong. Ten minutes in, and the proverbial has well and truly hit the fan.

You’re actually trapped on Talos One, an ageing space station controlled by military contractors with questionable ethics. Oh, and it’s overrun with shape-shifting aliens that are keen to get intimate with your esophagus, too.

In stepping away from the multiple levels of Dishonored‘s Dunwall, in favour of a sprawling, singular expanse, developer Arkane Studios has crafted a world that simply oozes atmosphere.

Talos One isn’t as devoid of life System Shock‘s Citadel Station, either. Instead of creeping through corridors alone, you’ll encounter plenty of survivors – some with their own agendas, and others just looking to make it back to earth alive.

Most will have a side-quest or two to send your way, either leading you to better gear or expanding on the backstory. There’s a decent amount of gameplay variety, but it’s the promise of more exposition that’ll leave you wanting to complete then all.

This back-and-forth gives the impression that you’re exploring a wide-open sandbox, but Prey is actually fairly linear: you might be able to leave the station for an impromptu spacewalk, but Talos One’s airlocks have to be opened from the inside before you can use them to shortcut your way between areas.

A NEUROMOD A DAY KEEPS THE TYPHON AWAY

Talos One is undeniably colossal, though, and you’re mostly free to explore it as you like, with a whole host of tools and abilities available from the off.

Those shady science experiments come in handy when they let you morph into a pencil pot that’s small enough to roll through locked doors, or lift things three times your own body weight to clear a path.

Corvo Attano might have had plenty of mystic powers to choose from, but Morgan’s abilities are grounded in science. As long as you’re happy sticking a giant needle into your skull to unlock them, anyway.

You’re limited to more scientific abilities at the outset, but scan enough Typhon and you’ll gain access alien powers as well. Still, being able to hack turrets and the workstations of your colleagues, or the know-how to dismantle the junk and detritus you pick up and turn it into something useful, has its uses.

Prey is packed full of things to pick up, fiddle with and collect. It’s what makes the Mimics so scary, but it’s also a goldmine for anyone that can turn a few frayed wires and circuit boards into a weaponised glue gun.

KEEP OUT OF REACH OF CHILDREN

More importantly, it can freeze those tricky Mimics in place, letting you get up close and show them the business end of your wrench. They’re quick, see – take your eyes off ’em for a second and they’ll disappear from view, either running away to regroup or transforming into a seemingly harmless object dotted around the room.

This is where the real terror comes from. Prey almost entirely avoids set-piece jump scares, with most shocks coming when the item you were just reaching for morphs into a Mimic and lunges straight for your face.

Instead, it’s more the ever-present sense of dread and tension that permeates through Talos One’s empty corridors – it gives the expansive space station a character of it’s own, one we haven’t seen since diving down to Bioshock‘s Rapture.

The incredible soundtrack only adds to the unease, with minimal, ambient notes giving way to stabs of moody, almost glitch-like electronica.

The only respite? Your silent, solitary space walks, where the only noise is Morgan’s panicked heavy breathing. It’s a shame the zero-gravity controls are so cumbersome, though, especially when you’re forced to fight in it.

Even back on solid ground, Prey feels at it’s weakest when you’re forced into combat. With only a few species of Typhon out to get you, there’s just not much variety.

There might be a huge selection of Neuromod powers and abilities to unlock, but most enemies are only weak to one of two – and few can handle the one-two punch of a psychic blast and a few shotgun shells to the face.

You can try and stealth your way through some sections, landing critical hit sneak attacks and using stationary turrets to do your dirty work, but running at full pelt and ignoring encounters altogether often works just as well.

There are a few exceptions, like the first time you encounter the mind-controlling Technopaths. They can turn your fellow survivors into walking bombs, forcing you to keep your distance until you can break the psychic link.

Experimentation is key, too. Each weapon has an upgrade tree, and you can use them simultaneously with any neuromods you’ve equipped.

Blueprints for expanding your arsenal are scattered all over the space station, but you’ll need materials to build with as well as the know-how to increase your firepower. Recycling stations let you disassemble the rubbish you’ve collected into raw materials, which can then be used to build new equipment.

The spiraling shortcut menu makes it a breeze to swap powers and weapons on a controller – hopefully other developers will borrow it for future games. The grid-based inventory management feels a little old-school, though, even if System Shock veterans are going to lap it up.

YOUR RESULTS MAY VARY

In fact, the whole thing feels like a love letter to those games, complete with story exposition told through audio logs, email reports and NPC conversations.

There’s a lot more going on behind the scenes, of course, and you’ll have to explore to find out exactly how things went wrong in the first place. Uncover it all and you’re looking at 20 hours of play from start to finish – I finished it in 15, with several missed side-quests that I’ll tackle on my second playthrough, using different gear and Neuromods.

Arkane might have distanced itself from the Dishonored series in terms of gameplay, but its iconic character art is back in play here. All the NPCs you meet (the ones that aren’t eviscerated corpses, anyway) have that familiar look, with overly accentuated features that are ever-so-slightly out of proportion.

It’s familiar yet different, thanks to the new sci-fi setting, but it would have been nice to see something completely new, rather than a reimagined version of what we’ve already seen before.

The scares, sci-fi setting and choose-your-own-way gameplay make Prey feel like a breath of fresh air compared to more linear adventures, and feels a lot like cult classic System Shock. Which can only be a good thing.

With the development team made up of ex-System Shock, Bioshock, Deux Ex and Half Life 2 staff, that might not come as a surprise, but it’s clear that Arkane hasn’t just delivered Dishonored in space – even if it’s sure to tide stab-happy Corvo Atano fans over.

Combat might not be super-slick, even with the wide range of Neuromods on offer to mix up gameplay, and the zero-gravity sections can be frustrating, but these minor problems don’t detract from Talos One’s foreboding atmosphere.

Morgan’s story is complex, dark and full of twists that’ll make you want to rummage through every locker, cupboard and desk drawer to uncover it all – even if you run the risk of the furniture morphing into a face-hungry alien while you do it.

At atmospheric masterclass of tension and terror, that’ll leave you looking twice at every innocent piece of furniture

Deep, involving story will have you hunting down every detail

Not as non-linear as it pretends to be

Combat isn’t all that exciting