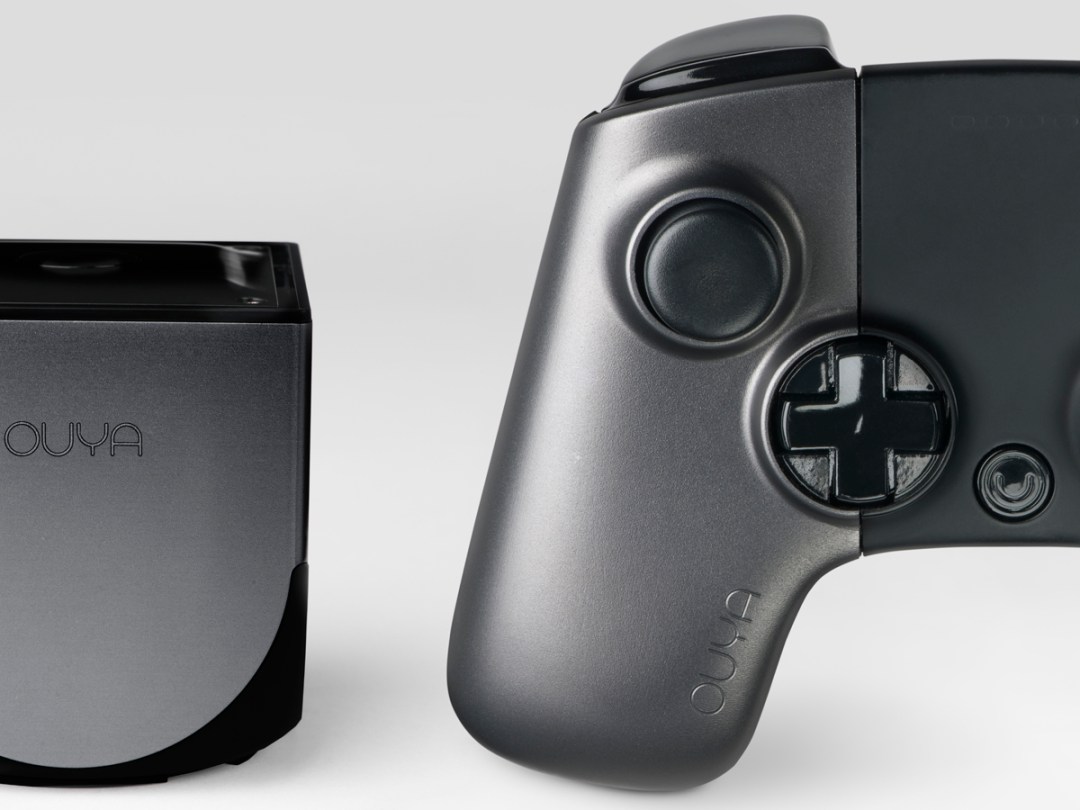 Ouya gave the world a new kind of games console when it launched its phenomenally successful crowdfunding campaign in August 2012. With a tiny form factor, a cheap price tag and an open operating system, the company’s console was the complete antithesis to the po-faced Xbox and PlayStation. Following early delivery to Kickstarter backers, the console is now available to everyone through Game and Amazon for £99, and launches with over 200 games and apps, all of which are free to try. That may sound like gaming heaven, but the truth is that this is just the start of a long journey for the Android-based home console.

Ouya is tiny, like a Rubik’s Cube with a curved base. It weighs just 300g, making it the most portable home games console we’ve ever seen. It helps that it uses mobile hardware, including an Nvidia Tegra 3 graphics processor, and it ditches the disc drive for downloadable games and hard drive in favour of 8GB of flash storage.

The console’s connections are simple; HDMI, ethernet, USB and a micro USB port. On the wireless front, there’s wi-fi internet and Bluetooth. It’s got everything you need, although you may want to buy a cheap USB hub if you plan on connecting more devices.

Ouya’s controller sadly isn’t quite as well designed as the console itself. The control sticks feel nice, a touch-sensitive pad allows you to navigate web pages, and it takes standard AA batteries. However, the shoulder buttons lack precision, the D-pad is unresponsive, and it generally feels cheap and plasticky. We found the standard wired Xbox 360 controller fared much better, and works with Ouya straight out of the box. The PlayStation 3 DualShock 3 controller also works if you prefer a wireless controller, but the Bluetooth setup takes a bit more time.

Ouya’s store is basic, sporting only basic information about each game, the number of “likes” from the community, and some screen shots. The most frustrating feature, or lack of, is pricing, which isn’t revealed until you’ve downloaded and played each game. Final Fantasy III is US$15.99, for example, and all of the prices are in US dollars, even in the UK.

The store is split up into different sections, highlighting journalist’s choices or particular genres, but the same games are recommended over and over. In short, the store is a bit of a mess that makes finding and downloading new games more chore than pleasurable jaunt through a digital sweet shop, and that’s a great shame.

The Ouya’s 8GB of internal storage isn’t a lot, and we hit the storage limit quickly. As yet, there’s no way to expand the storage using external devices, although Ouya promises this feature in future. The interface doesn’t make it easy to delete content either; there’s no option to sort your games by size, or by games you’ve been playing the least. It’s another foible of a system that’s already pretty user unfriendly.

Ouya actively encourages users to hack the device and load games and software not designed or approved for it. For the uninitiated, the process is called “sideloading”, and there are plenty of guides online to get you started if you want to go down that route. You can already play games such as Grand Theft Auto III, Jet Set Radio and Max Payne on the console, and install media players such as Netflix and XBMC. These programmes frequently crash or break, but they’re a sign that the Ouya community is dabbling in taking the device to some interesting places.

Making devs of us all

Every Ouya is also a development kit, allowing you to make your own games using a PC. Of course, it’s not quite as simple as it sounds – you’ll need to learn a little bit about programming – but to its credit Ouya makes everything as simple as possible. The website includes all the software and documentation you need to get started.

The selection of games and apps on Ouya at this stage is good, but not great. There are a few titles worth playing (see below), but the majority of games aren’t even worth the free download. It also bears mention that while Ouya runs on Android, its store is completely separate, so games you’ve bought on other Android devices won’t transfer over.

One of the best games for showing off the Ouya’s Nvidia Tegra 3 processor is Puddle THD. It’s a puzzle game in which you tilt the world to make a pool of water travel from the start to the finish. It looks great, the water physics are impressive, and the difficulty level feels perfect.

Towerfall, meanwhile, is the closest thing Ouya has to a killer app, as it’s both enjoyable and exclusive to the console. It’s a four-player action game with charming 8-bit visuals and a retro soundtrack. You and up to three friends have to shoot arrows at each other, while avoiding arrows and collecting power-ups. It’s almost as much fun to watch as it is to play. Just remember you’ll need lots of PS3 controllers or wired Xbox pads and a USB hub to get all your mates involved.

One of Ouya’s key selling points, at least for those who don’t mind a little bit of work, is its support for emulators, including consoles such as the SNES and N64. The emulators themselves are available for free from the Ouya store, but you’ll have to take care of acquiring the games, and the resulting moral and legal dilemmas, yourself.

We particularly like the suite of free apps and services already available on Ouya. Twitch.tv is a live streaming service for gamers (most of whom seem to play Starcraft II), while TuneIn streams live radio from around the globe. Plex is a media player that can pull content from a local server, and while it’s a little buggy, points to Ouya’s potential as a media centre.

Ouya shouldn’t be thought of as an alternative to a console from Nintendo, Sony or Microsoft; the quality and breadth of games falls way short of the offerings on those machines. What it is, however, is an intriguing games console for those who want something they can hack and tinker with. Given the fan support Ouya has already gathered, it could soon flourish into a decent little games console and media player. It’s just not there just yet.

So do you fancy joining the Ouya community and developing and hacking it to perfection? Or are you going to wait for the early adopters to make it better before taking the plunge? Let us know below.

It’s so far lacking mass appeal, but Ouya boasts some good games, great apps, and a following of people set to take it in interesting new directions

Gamepad is cheap and nasty

Some good games, but most are awful

Store is messy and hides prices