If you’re looking for a smartphone, they don’t get more phone-like than Nokia’s Series 60 handsets, which shrug off the complicated menus that cause Windows users to die inside a little more each day. This good phone follows in the footsteps of its Nseries forebears. It’s also 3G, so it’ll cope with whatever network you throw at it.

Rival to the iPod? Surely not

You’ve probably noticed that it’s no lightweight, or even middleweight, but the heart of that problem is also the heart of the music player – a 4GB hard disk for storing around 1000 of your tunes. That’s not the only trick, either, as you can genuinely use the N91 as you would any dedicated MP3 player.

Because you don’t actually have to connect to your phone network, you can use it on flights as an MP3 player – and also save battery life. A proper hold switch and a top-mounted 3.5mm headphone socket are just two of the features that make this a real iPod alternative.

Small fingers requiredThe basic music controls – play/pause, forward and back – are on a slide-down panel that covers the usual array of number keys, which has meant downsizing and makes them a wee bit small. It can also play DRM-protected tracks and is lightning fast to sync with Windows Media Player.

A 2megapixel camera only adds to the bulk, but it’s a great snapper. No flash, but you have to draw the line somewhere.

So both birds are definitely dead, plucked and baked in a pie, and – yes, we’re as shocked as you at this bit – it’s even worth retrieving the rather hefty stone.

Nokia resurrects the 6310 with a few modern enhancements

Back in black (and three other colours) 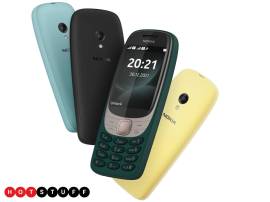 Big battery Nokia 2 could be a real weekend warrior

Two days between top-ups should ease that battery anxiety 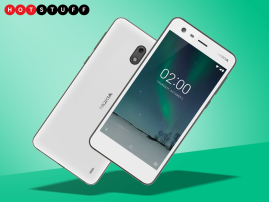