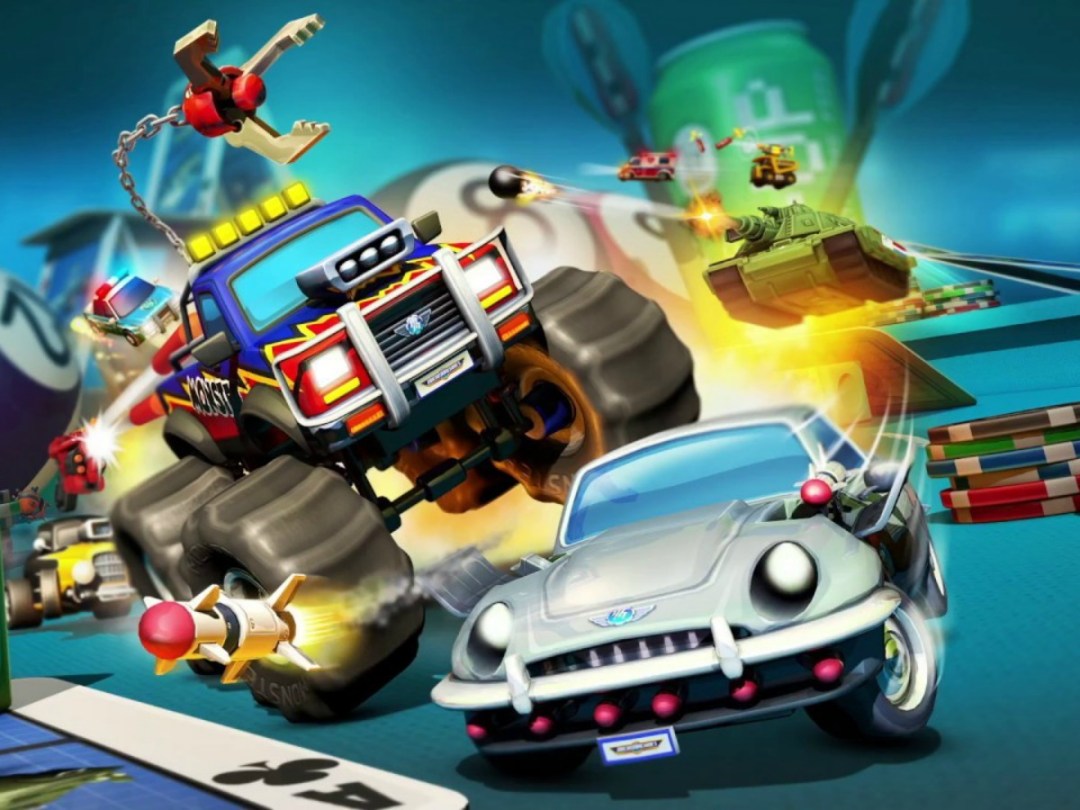 Millennials and baby-boomers don’t often see eye to eye, especially when it comes to childhood toys. One generation was obsessed with collecting Pokemon, while the other prefered to play Tiddlywinks. But there’s one thing that everyone owned as a child – no matter what decade they were born in – and that is the toy car.

You might have owned a Scalextric or a Hot Wheels, or perhaps even some Micro Machines. Regardless, every toy car was used to speed and skid all over your parents’ furniture. And if your friend’s miniature police car gave chase, you’d simply bash into it, sending it hurtling over your parents’ prized china.

Codemasters knows full well that you go all glossy eyed from thinking about these childhood antics, and so they’ve revived the equally nostalgic Micro Machines video game series.

Driving miniature vehicles across kitchen surfaces and pool tables in video game form isn’t just useful for reminiscing about the past. It’s also great fun for the present, and could possibly be one of the best couch multiplayer games for some time. How do I know? I managed to get my hands on with the latest entry into this classic series.

There’s a good chance you might have already played a Micro Machines game. They ruled parties back in the ‘90s on the SNES and Sega Mega Drive. If so, you’ll be glad to know that the core gameplay has been kept largely the same.

You get to choose from a roster of 12 vehicles, but they’re not the stylish supercars you’d expect in more serious racing games. Instead, you get to pick from the likes of a police car, a monster truck, or even a frikkin’ tank.

While the police car is naturally quicker than the tank, the speed gap isn’t as large as you’d expect, with Codemasters trying their best to balance out the competition.

To make up for the lack of speed, the tank is an absolute… well, tank, which means it’s great for knocking the other racers off the course so they go crashing down onto the laminate floor below. The range of vehicles offer varying handling and perks, but at this stage I’m not convinced of how well-balanced the options are.

One of the greatest aspects of the new Micro Machines is the attention to detail of the courses, with the same obstacles that you’d face if wheelin’ your toy car through the house.

There’ll be a puddle of milk or jam stretched across the road on certain circuits that will send your car skidding around like a drunk cat on ice. And then there’s the annoying saw-blade on the DIY bench that mercilessly slices your toy car into shrapnel if you touch it. There’s a reason you were always told not to play in the garage.

Not every object on the course is an obstacle though. On the kitchen level, you’ll be able to use the toaster as a launch pad to catapult yourself onto an otherwise impossible-to-reach platform. Books are frequently stacked up like ramps too, so you can daringly attempt a shortcut over the chasm between cupboards.

Like Mario Kart‘s Blue Shell, Micro Machines has some annoyances that help keep each race unpredictible. For example, it’s not always clear which direction the track is winding or whether an object can be used as a shortcut. The camera compounds this: focussing in without warning and often putting the leader at a disadvantage.

The main game modes – Race and Elimination – will be familiar to anyone with Micro Machines experience.

The Race mode is, as the name suggests, a racing contest between 12 players to reach the finish line. Of course, the top-down perspective and crazy weapons make this racer significantly different to every other speedster series.

Similar to Mario Kart you can pick up mystery boxes that will give you an item at random. These pick-ups can range from one-hit K.O. hammers to heat-seeking torpedoes, making this game full of carnage. Once destroyed, you’ll be resurrected after a couple of seconds have passed, but that time loss could be detrimental in your pursuit of a gold trophy.

Being destroyed in Elimination mode, however, results in permanent death. Well, until that round is over, at least. Unlike Race, everyone shares the same screen on Elimination. Fall too far behind the rest of the pack and the camera will leave you behind and cause you to explode into melting plastic.

This means that failing to hug a tight corner is often the reason for your destruction, which can get frustrating. The last car standing is given the maximum points for each round, but the overall winner is crowned after a number of games, so you still have a chance to make a comeback if you die early on. Elimination is a lot more unpredicatable than Race mode, which makes it decidely more entertaining too.

Don’t think that this is just the same Micro Machines with pimped up graphics though. Codemasters has added a brand new Battle Mode.

Instead of taking place on race courses, you occupy circular Battle Arenas that range from a garden to the plastic stadium of a Hungry Hippos. These arenas host new game modes including King of the Hill, Capture the Flag and Bomb Battle. All of these modes will be familiar to anyone who’s played a few online multiplayer games, but it’s exciting to see them being introduced to Micro Machines.

Rather than all 12 vehicles having access to every item like in Race and Elimination, Battle Mode sees each vehicle with their own unique power-up. This means that you need to consider a lot more than handling, speed and weight when picking your ride.

While the tank is the obvious choice since it can fire missiles, it can easily be out-maneuvered, leaving it vulnerable to attack from behind. But if your ally has a Fire Truck that shoots foam to slow the enemy down, then you have the perfect partnership. These modes are all about teamwork, so you’ll want your team to have a set of vehicles that compliment each other. To be so tactically in-depth is surprising, but will ensure competitive people are kept entertained without excluding newcomers.

There are even more crazy power-ups too, such as being able to deploy a laser-shootin’ droid or a devouring black hole. With such chaos, there’s a lot of fun to be had in these modes. You could decide to play them just for fun, or once you reach level 10, you can compete in ranked matches online to climb the Micro Machines‘ leaderboard. Who doesn’t want to be the king of plastic car carnage?

Codemasters has done a great job of reviving the classic game of cherished childhood memories, but at the same time, ensured that there’s enough additional multiplayer content to prevent the series from stalling.

Despite being able to play against the computer, this is a multiplayer game at heart. There’s not much content to entertain you when you’re on your own, as blowing up an AI just isn’t as satisfying as destroying your friend, but the £20 price point reflects this.

And besides, there aren’t many multiplaye couch games these days, especially if you don’t own a Switch and crave some Mario Kart-esque action. Factor in the nostalgic value and you have a game that will unite the older and younger generation for hours of multiplayer mayhem. You just have to wait until 23 June for it to all kick off.