After what seems like a lifetime of anticipation, Lego has finally launched its Mindstorms NXT robot kit – and once again it’s hit the mark.

The Mindstorms software, compatible with both PC and Mac, has 18 building and programming challenges, ranging in difficulty from a simple three-wheeled driving robot up to a full bipedal robot.

Lego’s claim that you’ll have your first robot in action after 30 minutes is entirely accurate, even though all it will do is drive, turn around and return to its starting position – to hoots of derision from any spectators. Get to grips with the drag-and-drop programming software, however, and their laughter will be silenced.

From seemingly simplistic beginnings – move, wait, make sound – there are incredibly precise modifiers and adjustments to make. The motors, for example, are accurate to one degree of rotation. Programs are downloaded to the brain by USB or Bluetooth.

Make it find a ball, grab it, then laugh maniacally (from a bank of available sound clips and speech) before scuttling off with it. Then program your robot to receive instructions via Bluetooth from your PC or mobile phone.

Weeks of funGenius – and easily enough to keep a man entertained for weeks on end. That’s before you get into the online community of programmers making custom robots and programs.

If you’re bored of your Pocket PC and weary of your Xbox 360, Lego Mindstorms might well be what your weekends are crying out for. Heartily recommended.

Lego Transformers Optimus Prime is more than meets the eye 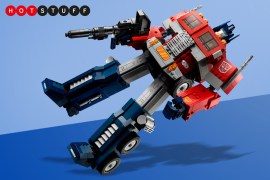