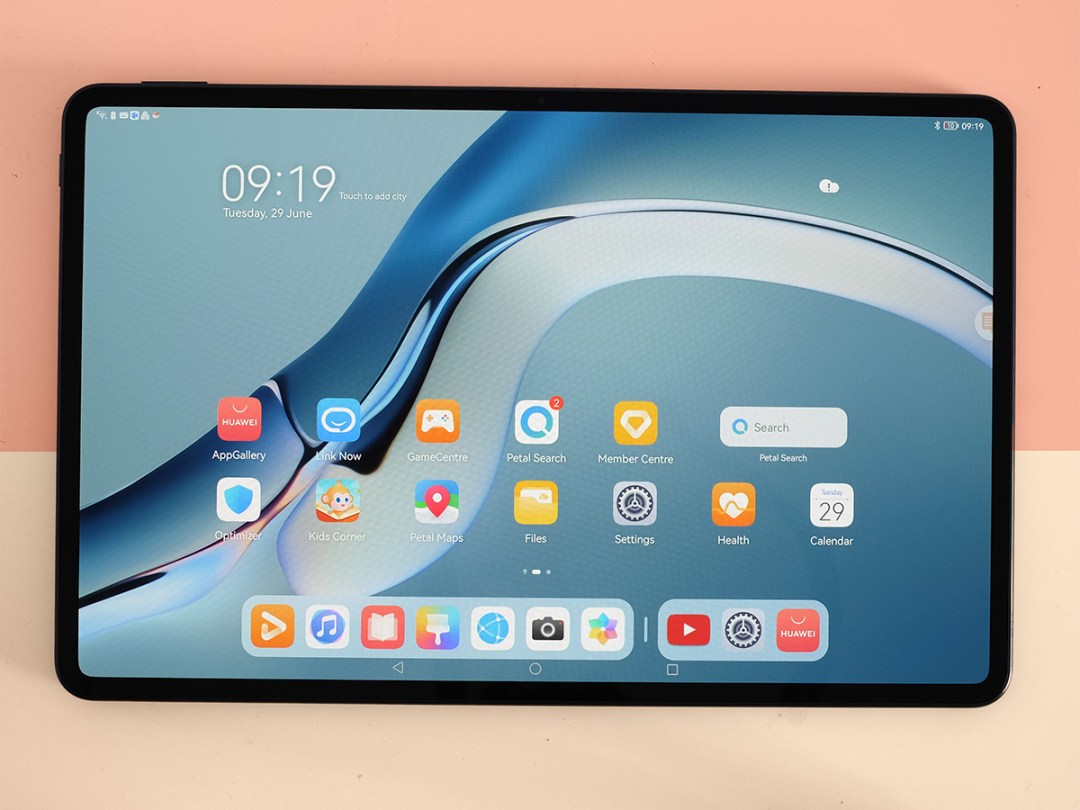 There are just a small handful of world-class tablets out there. The Huawei MatePad Pro 12.6 is one of them.

It dukes it out against the Samsung Galaxy Tab S7+ and Apple iPad Pro 12.9, fighting for the attention of everyone willing to spend big on a big tablet.

However, its app library is the worst of the three by a huge distance. This dramatically reduces what you can do with the tablet, making it a poor choice if you’re a bit of a gamer, or want to create music or artwork on your tablet. There are few holes to point out in the Huawei MatePad Pro 12.6 hardware, but the reality of actually using it should make you pause before buying.

If you jump onto the Huawei web store at the time of review, in very late June 2020, you’ll be able to buy the last generation MatePad Pro but not this one.

Instead you’ll have to get it from an importer like Banggood, where the 256GB version reviewed here costs £850. And you may get stung with additional customs charges if you choose to import like this. The European price is 799 Euro, and if we get a proper release in the UK we’ll probably pay that amount in pounds.

You’ll also need to pay £130 extra for the keyboard base, which we recommend if you plan on treating the Huawei MatePad Pro 12.6 a bit like a laptop.

The Huawei MatePad Pro 12.6 is a tablet of real highs and lows. How much you need to pay attention to the lows depends on what you want to do with a tablet.

Our experience of playing Gameloft’s Asphalt 9 on the tablet exemplifies a couple of the most important peaks and troughs. We’re not sure this kinetic racing game has ever seemed more thrilling than it does on the Huawei MatePad Pro 12.6.

It has a massive 12.6in screen you can comfortably hold in front of you. At arm’s length it’s not dissimilar to sitting a few feet away from a giant OLED TV. Colour is accurate in the ‘natural’ screen mode, pumped-up in the ‘vivid one: you pick. 2560 x 1600 resolution means the picture looks smooth and sharp in all the right places and the Huawei MatePad Pro 12.6’s speaker system pumps out Asphalt 9‘s soundtrack as we’ve never heard it before.

These speakers are a bit like the iPad Pro series’s. There are multiple drivers on the top and bottom, and they produce bass and volume that embarrasses most other tablets, including the iPad Air we had to hand during testing. The Huawei MatePad Pro 12.6’s dynamic range and separation of the parts of a game’s audio is next-level stuff. It’s easy to forget that sound is a big part of gaming when playing with a phone’s or tablet’s speakers. The Huawei MatePad Pro 12.6 is a reminder of how important it really is.

Asphalt 9 tears along thanks to the tablet’s Kirin 9000E, with none the lag we see in pretty much every budget tablet. This isn’t Huawei’s most powerful Kirin CPU, as there’s a step-up Kirin 9000. But this is no slouch.

However, these delights highlight what the Huawei MatePad Pro 12.6 lacks: access to a good app store. Like other new Huawei phones and tablets, the Pro runs HarmonyOS and does not have access to Google Play, the standard Android app store.

Right now, the Huawei AppGallery alternative is pretty rubbish. Search for a game and you’re more likely to find rip-off apps exploiting the game’s name that, for example, offer wallpapers rather than the thing itself. A feature called Petal Search offers links to other third-party app stores that might have more luck. We tried to get Minecraft downloaded. No joy. GTA: Vice City? No chance. Bloons TD? Only the free spin-off games.

The Huawei MatePad Pro 12.6 should be one of the best ways to play Android’s most graphically intensive games. But you just can’t play enough of the things on this tablet. There’s some of this effect on the creativity side too. There’s nothing like Apple’s brilliant Garageband music maker app, and AppGallery does not offer any of the slightly less friendly alternatives you can download on Android.

You can get Microsoft Office from the AppGallery, which is great, but you need to get a £65/year Microsoft 365 subscription to use it properly. And there just isn’t the wealth of free alternatives found on Google Play if you’ll only occasionally use the Huawei MatePad Pro 12.6 for work.

That said, the built-in Notes app saw us right for a few days of writing articles. Buy the optional keyboard case, though, and the Huawei MatePad Pro 12.6 will actually make a pretty decent little work computer for the basics. This is a folio style case with keys that have a deeper action than a lot of new laptops. There’s no touchpad and it’s not great for working on unstable surfaces, but that stands for the Huawei’s rivals too.

You need to pay extra for the Huawei MatePad Pro 12.6’s pressure-sensing M-Pencil stylus too, an Apple Pencil-a-like £100. And to get the apps that justify it, like Infinite Painter and Autodesk Sketchbook, you have to look beyond AppGallery because the apps you need just aren’t there. Pretty much all the Huawei MatePad Pro 12.6’s weaknesses are about the software, not the hardware.

There are some nice touches in the interface, though. The Huawei MatePad Pro 12.6’s front-end looks as if it has been lifted from an iPad. The bottom shortcut bar is eerily iPad OS-like. Huawei has a few chops of its own for multi-tasking. You can open up apps on top of each other in Windows, rendering those apps in the “tall” shape you’d see on a phone screen. It’s not Windows 10-grade stuff but we used it for web research while writing articles happily enough.

The Huawei MatePad Pro 12.6’s casing is notable too. This thing feels great, a dense slab with no sense even a cubic millimetre has gone to waste. But it is, surprisingly enough, plastic rather than glass or metal. It’s the most expensive-feeling plastic tablet you’ve ever touched but is it as swanky as the aluminium used in iPads and the Samsung Galaxy Tab S7+? No, not quite.

Battery life is great, however. You get a 10,050mAh battery, similar to the size of the iPad Pro 12.9’s and Galaxy Tab S7+’s. Four hours of streamed video takes 22% off the charge level, suggesting a full charge will last around 18 hours.

Anything else to consider? While we think the MatePad Pro 12.6’s screen is great, it uses a standard 60Hz refresh rate. The Galaxy Tab S7+ has a 120Hz screen, and so does the iPad Pro 12.9. You also miss out on the HDR vide enhancing brightness of the top iPad. Maximum brightness here is good for a tablet, but won’t melt your eyeballs like Apple’s best.

The Huawei’s processor also has slightly lesser graphics power than the Galaxy Tab S7+, and dramatically less power all-round than the M1 CPU iPad Pro. But to be honest we found no way to experience that shortfall first-hand with so few AAA apps and games available to try. Even Fortnite, which you can play, only runs at 30fps because the options Epic Games unlocks for some high-power devices are still off the cards here.

Want to know about the cameras? There’s a 13MP standard cameras and an 8MP wide on the back and an 8MP selfie camera up front. These are decent by tablet standards but don’t get near to those of good Huawei phones. There are some neat extra touches in the camera app, though, such as Night mode.

This takes a bunch of seconds to shoot a single image, but significantly improves dynamic range, not that we recommend waving around a giant £800 tablet at night on the high street.

There are only two other serious competitors for your cash at this level, the iPad Pro 12.9 and the Samsung Galaxy Tab S7+.

The iPad Pro is significantly more expensive but is the best choice by far for creative use or gaming. It has the best library of apps and games, arguably the most advanced screen and the most powerful processor by an almost ridiculous margin.

Apple’s iPad Pro 12.9 is in a league of its own and, yes, you do pay for that sort of supremacy.

A comparison with the Samsung Galaxy Tab S7+ is more useful, then. They are similar in price, and in the hardware on offer. The Samsung has an aluminium casing instead of a plastic one, although surprisingly enough the build quality is actually comparable. That cool to the touch feel of metal will probably clinch it for many, mind.

Samsung’s screen beats Huawei’s with a 120Hz max refresh rate, for smoother scrolling. But the real talking point here is Google Play. The Galaxy Tab S7+ has it, the MatePad Pro 12.6 does not.

There may be a lot of apps on Huawei’s AppGallery rival if you go by the numbers, but pretty much all of Android’s more ambitious and interesting apps are not here. No Minecraft, no Baldur’s Gate II, no Life is Strange, no Infinite Painter or Steinberg Cubasis 3. If you want to explore what can be done on a tablet rather than just browsing the web and streaming Netflix, the Samsung Galaxy Tab S7+ is clearly the better choice.

The Huawei MatePad Pro 12.6 is a killer tablet if you just look at the hardware, with speakers that show how much of a difference genuinely decent audio can make for mobile gaming and movie-streaming.

Its screen is great and battery life is long. However, it’s impossible to ignore that the Huawei MatePad Pro 12.6 feels a bit like what you’d get if Amazon decided to make a really, really expensive Fire HD tablet.

Huawei and Amazon tablets don’t get the Google Play app store, and that means access to games and apps is severely limited. You can only get around this so much by side-loading apps, itself a security risk, so bear that in mind before deciding the Huawei MatePad Pro 12.6 is a better deal than an iPad Pro 12.9 or Samsung Galaxy Tab S7+.

It’s a plastic tablet (but a great one)