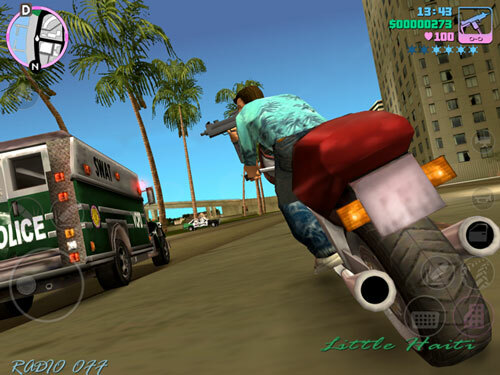 It’s been a decade since Rockstar Games took us to the neon-tinged 1980s world of Grand Theft Auto: Vice City – creating a blockbuster that many gamers still regard as the high watermark for the series. For its 10th birthday, Rockstar has ported Vice City to iOS and Android.

Vice City on mobile is every bit the crim-sim we all know and love (and if you don’t know it, you’ll love it too). You get all the main story missions, side missions and open-world gameplay from the console game, all optimised for a mobile experience.

That optimisation means it looks better than ever, thanks to some graphical tweaks and, of course, a new touch control system – but more on that later.

Vice City is set in Rockstar’s very own satirical version of 1980s Miami, all Art Deco beachfront homes and neon-lit nightclubs, ringing to the beat of Toto and Kool & the Gang. You play Mafia hitman Tommy Vercetti, recently released from prison and seeking out those responsible for his drug deal gone wrong – all while building his criminal empire on the side, of course.

The open world gameplay has just as much appeal on mobile as it did on the console – you’re free to drive around bothering police, hijacking other vehicles and terrorising civilians as you please.

The game’s dialogue – voiced by stars like Ray Liotta, Dennis Hopper and Burt Reynolds – is present and correct, as is the synth-tinged soundtrack. You also get the ability to play your own music during the game, while the iOS version features iCloud support for gaming between devices.

And then we come to the controls. Like so many touchscreen versions of console games before it, GTA does suffer from a less-than-ideal control system, particularly when driving. Left and right arrows on the left of the screen control the steering, while acceleration, brake and handbrake are on the right. It certainly takes some getting used to, so expect to smash into a few walls, lampposts and the odd pedestrian while you do.

On foot is better – the camera angle is controlled by swiping the right hand side of the screen, with a floating joystick on the left, giving you more accurate control over direction than behind the wheel. You can tweak the controls to a fully-analogue setup for driving, but without tactile feedback you’ll still end up swerving all over the place. Of course, the Android version benefits from that platform’s support for game controllers.

When it comes to weapons, the automatic aiming system can cause issues too. It locks on to whoever is closest to you when you fire, and if that isn’t the enemy, you could end up blasting away at a hapless civilian rather than the guy shooting chunks out of you.

Thankfully, these issues don’t take away from the fact that Vice City feels as fresh and exciting as it did a decade ago. Its £2.99 price tag is repaid in nostalgic joy the moment you boot up the game, making it absolute must-have for your iPhone, iPad or Android device. First-time player? Then be prepared to be glued to your screen for the foreseeable – we’re still hooked ten years on.