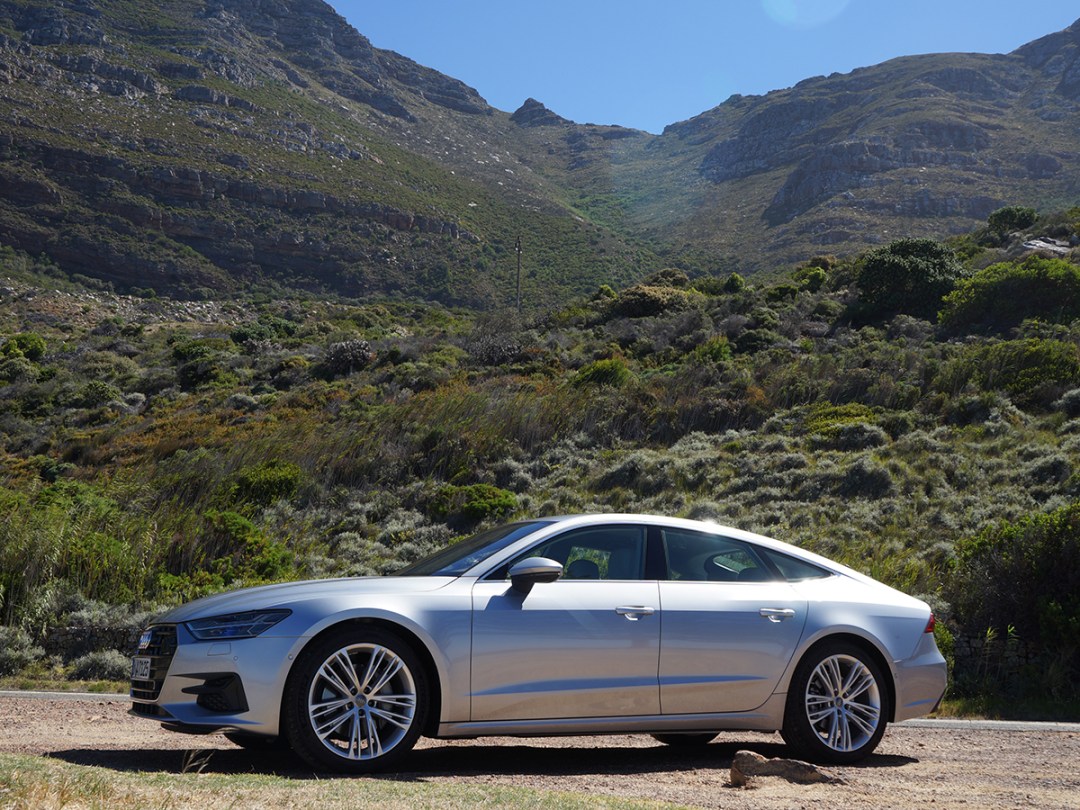 It’s no fun being forced to choose. So why have one or the other, when you can just have both?

The A7 is the Neapolitan ice cream of Audi’s line-up: a saloon that’s overflowing with space and lets you ride in limo-like luxury, but with the looks and responsiveness of a sporty coupé.

It also has a cabin full of tech that has filtered down from the flagship A8, making this the grand tourer you’ll want to drive yourself, rather than be driven around in.

Although, having recently taken one for a spin on the coastal roads of Cape Town, we discovered there’s plenty to like in the passenger seats as well as behind the wheel.

In swooping Sportback guise, the A7 cuts an imposing presence on the road from just about every angle – even if that absolutely giant grille looks a bit like those old school photos where you smiled just a bit too enthusiastically. It does leave plenty of room to disguise the many sensors and radar scanners needed that unlock the level 3 autonomous driving abilities coming later down the line, though. There’s nothing dramatically different to the A8, at least from the front and sides, with a similar cut-in along the side panels and familiar front end. It’s ever-so-slightly shorter and narrower than the outgoing model, with an extended wheelbase to give it a bit more room inside. The most striking visual change is at the back, with a dramatic angular tailgate, boot spoiler that pops out at high speeds, and an LED light strip that runs across the whole rear end. It gives a real muscle car vibe, like a Dodge Challenger that’s put on a business suit.

Hop inside and the A7 feels expansive, if not cavernous. It’s slightly taller than before, meaning 5mm of extra room for your bonce -but seeing how it’s essentially a coupe with four doors, you shouldn’t expect a colossal amount of room in the back seats. 21mm of extra space for your legs will still be much appreciated on a long journey, mind. With 535 litres of boot space, there’s room inside for a week away’s worth of luggage, or indeed two golf bags – if you’re what Audi considers the ‘typical’ A7 driver, you’re probably more interested in the latter. You’ll also want to watch out in a multi-storey car park – the A7’s powered tailgate opens to an impressive height. That makes it very easy to chuck bags in the back, but a shortarse might need to keep a stepladder in there just to reach the button to close it again.

Rear passengers are almost as well catered for as the front seats, with full dual-zone climate control in the back seats and multiple USB ports for keeping your gadgets topped up.

The leather finish is superb, with high quality trim everywhere you look. Acoustically treated glass keeps outside noise in check, and the seats are perfectly comfortable for those long motorway stretches. Just be careful not to fall asleep – the A7 makes it all too easy to be one of those co-drivers that doesn’t pull their weight on a journey.

The optional air suspension is partly responsible: it gives a sublimely smooth ride for the most part, but can be easily upset by bumpier surfaces. On motorways it can feel like you’re gliding over the road, only to feel jarring as soon as you leave at the exit junction. The 20in wheels fitted to our test mule have to shoulder some of the blame, mind.

Audi’s active rear-wheel steering system was a revelation in the A8 (particularly the lengthy extended wheelbase version) and it returns here to help you navigate tight car parks. The rear wheels turn in the opposite direction to the front ones at slow speeds, giving you a much tighter turning circle – then once you hit 60kph, they turn in the same direction to keep you stable at higher speeds.

There’s plenty more driver assistance tech where that came from, too. The cruise control system can stop and start the A7 when you’re stuck in traffic, based on what the car in front is doing. It’ll stick to one lane and make steering inputs for you, too – essentially driving itself.

Parking and true autonomy are still a way off, but right now Audi’s natural steering inputs and smooth braking give us the confidence the tech will work well when it does eventually arrive.

It’s the driver that gets all the real tech toys, with Audi’s Virtual Cockpit replacing the traditional dial cluster with a 12in screen that puts all the info you’d need right in front of your nose. Digital replicas of analogue gauges are squeezed in around the sat-nav view that fills the display.

Of course, if that’s not enough, the optional Heads Up Display actually overlays navigation instructions and your speed over the windscreen.

The biggest upgrades are to the centre console, where you’ll find two massive screens. One handles Audi’s glorious MMI infotainment system, while the other concentrates on climate control. Traditional buttons have gone the way of the dodo, with audible clicks joining haptic feedback that bumps and vibrates to let you “feel” their virtual replacements.

Having only spent the best part of a day behind the wheel, I’m not confident this is a simpler setup – I regularly had to take my eyes off the road to adjust the aircon, because doing it blind inevitably meant sliding the temperature too far in one direction. Tapping in a sat-nav destination is much more distracting than with the old jog wheel, too.

You can use Audi’s cloud-connected voice controls instead, which do a great job of detecting even the strongest Brummie accents (thanks, co-driver Matt) – but certain controls like the heated seats are exclusively button controlled. It looks the business, but BMW’s less flashy iDrive is perhaps easier to use while you’re driving.

Settle on a comfortable temperature, though, and the virtual cockpit will do most of the heavy lifting you’d want while on the road, like choosing which tracks to pump through the excellent Bang & Olufsen sound system. It delivers clarity unlike few other in-car systems can.

We spent most of our time behind the wheel of the 50 TDI Sport, which is almost certain to be the favourite for UK customers. Its V6 diesel power plant generates 282bhp and 457lb ft of torque, which is enough to propel you to 60mph in 5.7 seconds.

That’s not the whole story, though. It comes with a 48v mild hybrid system, which can deactivate the engine when you’re coasting at motorway speeds to save on fuel. It also dials down the turbo lag, although it can’t quite get rid of it completely.

The combination delivers quiet and comfortable cruising, which is exactly what you want from a car like this. There’s torque on tap if you go looking for it, too.

The engine is mated to an 8-speed tiptronic auto gearbox, which is beyond subtle and best left alone to make gear selections for you – there’s not much to be gained from the diesel motor by taking over and using the wheel-mounted paddles.

Rear-wheel steering helps the car feel responsive on tighter bends. The A7 is a heavy brute, but it hugs the road like a smaller and lighter car would – even if the Quattro all-wheel drive system doesn’t give you much feedback through the steering wheel.

That’s exactly what A7 customers are after: the styling of something that sets pulses racing, but with refinement that gets you to your destination relaxed, rather than rattled.

Audi seems to have delivered, with the upgrades and new technology making their way down the range from the A8 pretty much wholesale. You get great looks, plenty of gizmos, and a ride that’ll eat up the miles.

Without having driven them, it’s impossible to say if the A7 will be as dynamic as its two main rivals, the new Mercedes CLS and BMW’s 6-Series Gran Turismo. But for getting somewhere in comfort, with more tech than a branch of PC World? The A7 should be right on the money.