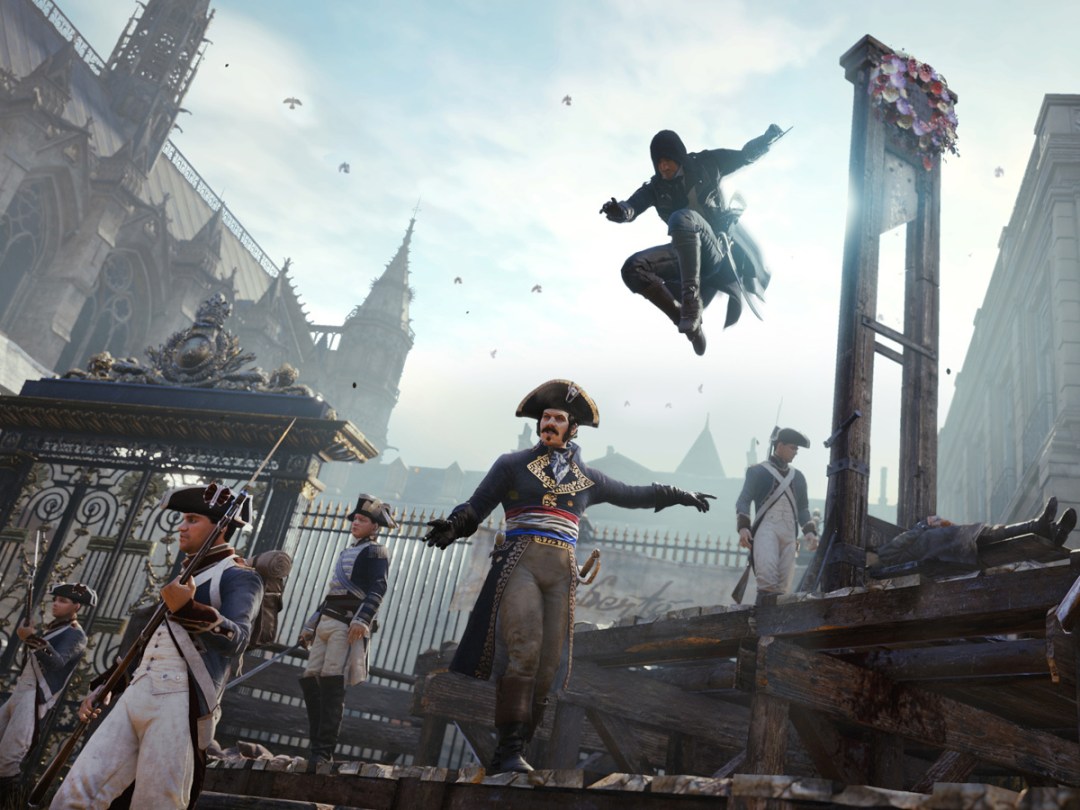 Triple-A video game blockbuster sequels are in the same camp now as healthy film franchises – and they have the same constraints.

Players pay money for a new plot, some new features and possibly a new protagonist, but the nuts and bolts remain the same. There’s not much room to tinker with a formula that attracts millions every year. If it ain’t broke you don’t fix it, you just add to it.

This is the situation Assassin’s Creed: Unity finds itself in. There’s not a hell of a lot of room for innovation here and since it’s the first iteration built only for new generation consoles (and PC), the cautious approach seems rather logical. Like earlier games it features a hooded killer, a plot that dovetails with historical events, tons of side quests, collectibles and trinkets and a wide open city for players to parkour through. Generally speaking, if you’ve ever played an Assassin’s Creed game, you know largely what you’re signing up to with Unity.

Assassin’s Creed: Unity tells the story of one Arno Dorian, a rich delinquent who finds the rug firmly pulled out from under him when he’s blamed for the murder of his adoptive father. Stripped of the privileges he’s enjoyed as a Parisian aristocrat and burning with the need for revenge, he joins the Assassins in their war against the Templars. This not only sets him on a path to taking down those responsible for his misfortunes, but it also puts him on the opposing side of the ongoing secret war to his childhood sweetheart, Elise.

The story doesn’t exactly break new ground for the series – subtract Elise and it’s basically the same set up as Assassin’s Creed II – but it’s a well-written and paced yarn and it doesn’t run out of dramatic steam before the end credits.

Riots on the streets of Paris

So far, so Assassin’s Creed, but Unity’s scope and depth is head and shoulders over anything this series has ever attempted before.

Set in Paris on the eve of the French Revolution, the map is not only on a 1:1 scale with the inner city of its real-world counterpart, but it captures the vibrant atmosphere that must have existed at the time beautifully. The streets of Paris are filled with protesters burning effigies of aristocrats, brawls spill out into the streets from taverns and the city guard is lining up agitators against the wall. Paris feels like a powder keg needing only a stray spark to send the whole thing off.

The city is also filled with catacombs, interiors to explore and hidden secrets. Charge through the streets and tap the Eagle Vision button, and players will see locked doors they can pick to gain treasures, entries into the tunnels beneath the streets of Paris and windows they can use to continue a parkour run unbroken. They’ll also note potential enemies (marked in yellow) and hostile NPCs (marked in red), which, unless they’ve equipped themselves with some decent weapons, they’re advised to avoid.

And why would you avoid the bad guys? Because combat is a far more nuanced affair than it was in previous Assassin’s Creed titles. You can’t just spam the defence mechanic and cut your way through waves of enemies. The AI not only watches for this, but it does its level best to flank the player and a lot of the time, attacks will occur from the rear.

Players need to learn parries and mix up their attacks, but in a lot of instances, when they find themselves surrounded, the best option is to drop a smokebomb and flee.

The big new feature in Assassin’s Creed Unity is co-op play on the same map as the main campaign. One player acts as the host and once they invite a couple of friends into an online party, between two and four of them can take part in missions – depending on the number of players the specific mission allows in.

The missions are divided into two categories: assassinations and heists. The former usually sees players having to complete one or two tasks, such as pickpocketing letters of passage or completing an obstacle course, before zeroing in on their target. The latter involves sneaking into Templar controlled areas and stealing precious artefacts. Once again, rewards for mission completion are tallied up in cash and weapon, armour and equipment unlocks, so they’re worth doing even if you’re a lone wolf player, just to get your hands on better gear.

A word of advice before you proceed, though: invest in a decent headset and make sure your online connection is strong. First off, there are few things more infuriating than trying to coordinate an attack with players you can’t speak to. Second, some missions are rather lengthy and you don’t want to run the risk of being dumped out of a lobby because your connection failed.

On top of all the on-disc content, Ubisoft unsurprisingly plans to add more and more to the experience in the months after release to keep players hooked (and spending money). Two large chunks of content have been revealed thus far.

The Dead Kings side campaign explores the city of Saint Denis, and finds Arno battling Raiders and solving puzzles within the catacombs following the events of Unity. He’ll also have a new Guillotine Gun available, plus the Dead Kings pack adds new missions to the Unity main game as well.

Meanwhile, Assassin’s Creed Chronicles: China is a brand new side game that takes the form of a 2.5D side-scroller. You’ll play as Shao Jun, a character from the Assassin’s Creed Embers animated film (and who was trained by series favorite Ezio Auditore) and battle through 16th century Beijing.