Plenty of laptops are light – but how many are so featherweight you’ll want to tie them down in a light breeze? The Lenovo Yoga Slim 7i Carbon weighs less than a kilo, and isn’t even 15mm thick at its chunkiest point.

Revealed as part of Lenovo’s refreshed 2022 laptop line-up, the no-compromise clamshell is made of equal parts carbon fibre and aerospace-grade magnesium alloy. It should be tough enough to take anywhere, despite being so svelte, and has Intel’s 12th Gen Core CPUs providing the performance. Up to 32GB of RAM and 1TB of solid state storage aren’t to be sniffed at in a thin-and-light, either.

The 13.3in screen has a 2560 x 1600 IPS panel, with a 90Hz refresh rate for smoother scrolling. There’s also the option to upgrade to a touchscreen. Full sRGB coverage should make it a handy machine for creative types too. The only major downside is connectivity: there are just two USB-C ports. You don’t even get a 3.5mm headphone port – but that’s the price to be paid for thinness.

For a bit more power, the i4in Yoga Slim 7 Pro X and Yoga Slim 7i Pro X step up to 14in screens and give the choice of Intel or AMD power. A larger chassis also means there’s room for dedicated graphics, with an Nvidia GeForce RTX 3050 providing real gaming potential. They still weigh in at under 1.6kg, so should be almost as portable.

The larger, but more eco-conscious Yoga Slim 9i is the other highlight from the updated range. It’s a bit more business-focused, with hardware-level encryption and AI-powered security, but still looks the part with a glass-heavy construction. Lenovo also says it’s certified carbon-neutral, which is impressive given the top-end hardware lurking inside. Expect 12th Gen Intel Core i5 and i7 CPUs, up to 32GB of RAM and up to 1TB of storage.

You can have the 14in OLED display with either a 2.8K or 4K resolution, with both able to deliver 100% DCI-P3 colour coverage. Video editors will also appreciate the HDR True Black 500 certification, so what you’re seeing onscreen really is as the creator intended. A quad-speaker setup courtesy of Bowers & Wilkins promises punchy audio, too.

The Lenovo Yoga Book 9i is a dual OLED stunner 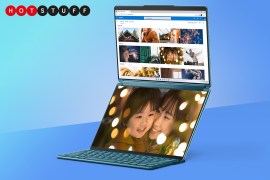 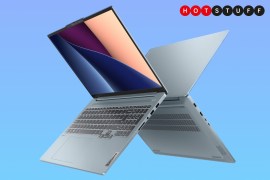