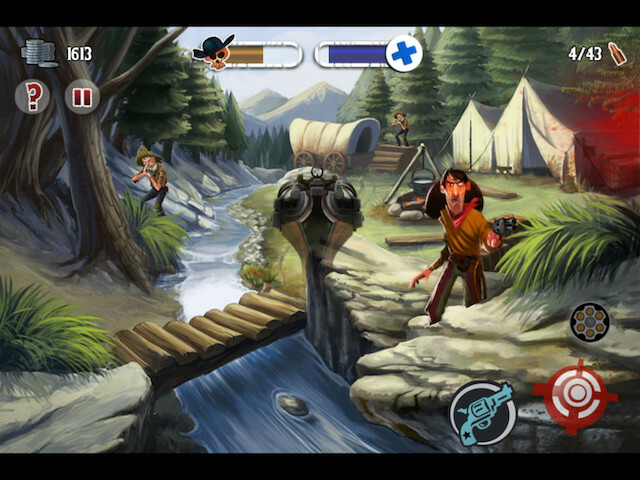 Atari has been revamping its old arcade classics for an iOS audience recently, and following in the footsteps of Super Bunny Breakout and Centipede: Origins is the Wild West shooter Outlaw.

Back in in 1976, Outlaw was a fast draw shoot out between two pixelated cowboys – now it’s a full-colour, cartoon-styled virtual shooting gallery. Your rootin’ tootin’ rustler takes on groups of sheriffs, outlaws and gold miners across 10 stages, with 10 levels in each.

You’ll start off your gunslinging career with a basic revolver, which will see you right for most of the first stage. As you progress through each stage, the bad guys get tougher and appear quicker than ever, hitting you with an almighty barrage of bullets if you don’t act fast.

To do this, you can upgrade your weapon in the armoury. You earn cash with every kill, so your bank balance goes up easily enough for you to buy new weapons and keep up with the difficulty curve. Each weapon itself can also be upgraded, increasing its accuracy, power, reload speed and cartridge capacity, for example.

As you go through the levels, you’ll rise up the cowboy ranks and unlock new stages, usually allowing you to move onto the next around half way through the one you’re on. This means that should the end of a stage get too tricky, you’re not stuck replaying the same level over and over and you can revisit harder levels later, once you have better weapons.

That doesn’t stop the game feeling repetitive though. While there are 10 stages, there are really only five environments, each shown in day and night, with no effect on gameplay – it’s purely a change of scenery. The bad guys stay the same too, simply become trickier to dispatch as you progress through the stages.

On-screen controls are occasionally glitchy too. Move your thumb off the screen and your crosshair is thrown to the edge, losing you vital seconds in a tough shootout. The trigger button could do with being slightly bigger too – we found it was too easy to press the ammo reload icon instead when things got a little heavy.

However it’s ultimately Outlaw’s repetitiveness that is its downfall. While it’s fine for a fast-paced shoot out, there’s nothing in it that really spurs you on to keep playing and complete it. With no storyline to speak of, and no twists in the gameplay to keep you on your toes, Outlaw keeps the simplicity of its 1976 namesake that will leave iOS users a little cold.