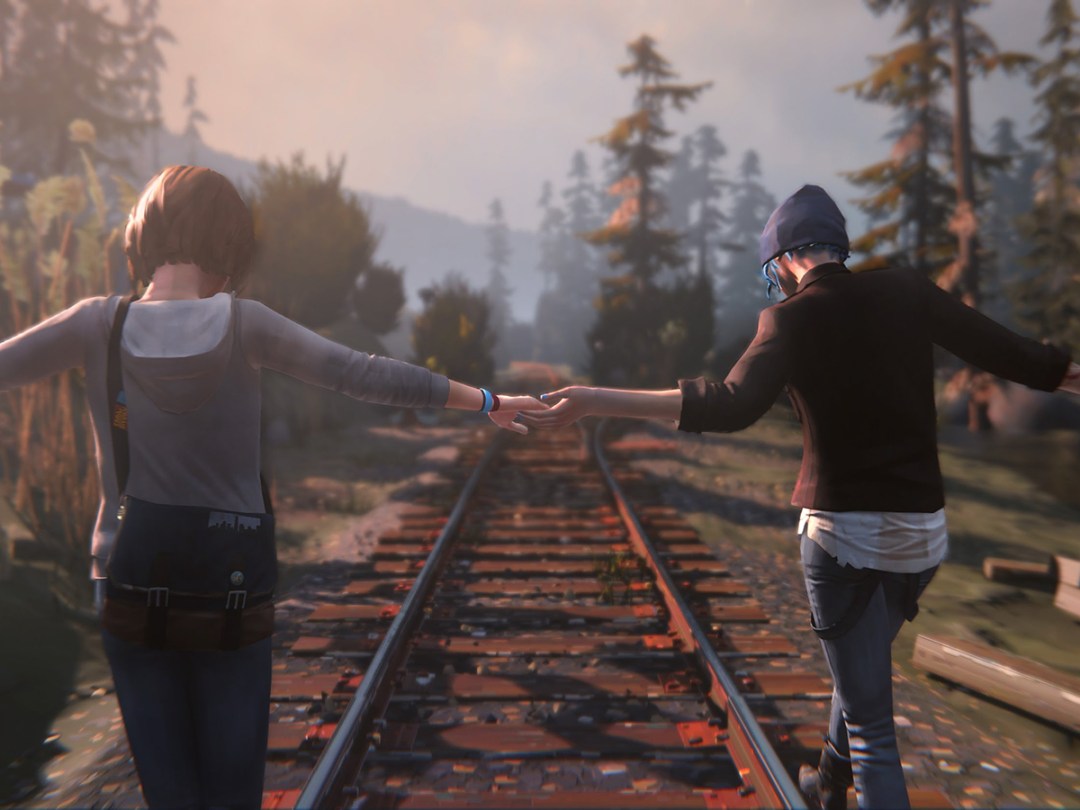 When was the last time a video game made you cry? If you’re a serial blubber like me, then it shouldn’t have been long ago. In theory at least.

Ignoring one particularly traumatic encounter with a blue shell in Mario Kart 64, Life Is Strange stands as the only game that’s made me shed a hyper-masculine tear or two. Since finishing with the episodic adventures of Max Caulfield, I’ve spent a lot of time wondering why that is. Especially when there are several moments in her story that simply don’t work.

Now it’s been rereleased in a deluxe ‘Limited Edition’ package, including a 32-page artbook, directors’ commentary and CD soundtrack, this seems like the right time to re-evaluate what’s rightly been hailed as a modern classic.

Choose your own adventure

Life Is Strange isn’t like a lot of video games, and I’m not just saying that because it made me lachrymose. It has a female protagonist Max and centres almost entirely around her friendship with the natural born wrecking ball Chloe Price. Despite its flirtations with the supernatural, the majority of LiS revolves around the low key and melancholic.

Most significantly of all, it forces you to agonise over seemingly small choices and watch as their consequences snowball in unexpected directions.

Unless you possess supreme reserves of charm and manipulative tact, you’re going to see some relationships blow up in your face at one point or another. You’re almost playing as the well-intentioned incarnation of Jordan Belfort. Unlike Telltale’s The Walking Dead and Game of Thrones series, LiS’ entralling story significantly alters based on how you react to a series of important events.

Sometimes this mechanic means dramatic changes to Max and her home in Arcadia Bay. Often it’ll alter the way fellow students and teachers at Blackwell Academy, as well inhabitants from the surrounding town, react to her. And by ‘her’, I really mean you.

Max begins Life Is Strange as an archetype: the painfully shy art school student. The decisions you take to make friends and influence people will both embolden her and piss other people off. As you work your way through the game’s five installments, its central protagonist becomes both more interesting as a character and unique to the way you’ve played as her.

A lot of LiS players will swear blind their Max is straight or gay, and the game affords you enough nuance to allow for either circumstance. For the most part, Max is free to reflect your own personality or that of the person you’d like to be. You never really know whether you’re making the ‘right’ choices, and that lack of certainty is deeply affecting.

Thankfully, Max has been gifted with a cheat of sorts.

Having woken from an apocalyptic nightmare at the beginning of LiS, she’s suddenly gifted with the ability to time travel. Rather than being able to hop in a blue telephone box and head back to when there was life on Mars, her powers barely extend beyond the last 30 seconds.

What a waste, right? Wrong. Being able to reverse very recent history means Max can twist previous conversations to her benefit, pre-empt the actions of others and change what happens next. This hands you almost complete control over the character’s agency, making you feel very much responsible for what happens next.

This freedom to do as you please and really impact the lives of those around you is a rare thing in video games. A lot of the time you’re just gifted the illusion of choice or no choice at all. Hence you can murder countless foes as the Uncharted series’ Nathan Drake or plough your car through an innocent bystander in Grand Theft Auto V without feeling a pang of remorse.

This is what you’re supposed to do, after all. You horrendous excuse for a human being.

In contrast, there were a litany of instances in LiS where I wish I’d handled a situation differently. Either because I turned out to be a terrible judge of character or proved far too selfish to act in the best interests of someone other than Max.

As with the dystopian Papers, Please and SOMA, LiS really puts you through the wringer. It’ll teach you a lot about yourself, and not all of that is good. Only Beyoncé could play this game and come out of it still feeling #FLAWLESS.

It’s this originality that sustains the game through its weaker moments, of which there are several. Some plot twists and fetch quests are particularly contrived beyond belief. Get started with LiS and at one point you’re going to spend a hell of a lot of time wandering around a junkyard in search of a stray glass bottle.

As for those twists? It’s worth you discovering and reflecting on them for yourself. Beware, they will occasionally arrive in a lumpen dose of heavy-handed exposition.

Not all of LiS’ original flaws are retained in its Limited Edition incarnation. The lip-syncing in Episode One was especially ill-executed with characters’ mouths and voices appearing to operate from entirely different timezones. This has now been fixed via an update that’s available to players new or old, which is a real boon.

None of LiS’ missteps are so jarring as to yank you out of the sumptuous world Dontnod has crafted here. From poking around the dorm rooms of your peers to hanging out in the local diner, you’re constantly encouraged and rewarded for immersing yourself in your surroundings. In fact, one of the game’s most gasp-inducing events depends on your reading and remembering what’s written on a postcard.

Despite the missing person plot that LiS revolves around, its best moments often involve nothing much at all. Like when Max picks up a guitar and strums out a particularly ramshackle version of José González’s Crosses. Well, she is only 18.

These endearing details are expanded on in LiS’ ‘Limited Edition’ guise, which is a bargain at only few more pounds than the game’s download-only season pass. For your extra cash, you’ll get a CD of the game’s yearning indie soundtrack and a charming art book with some unreleased concept pics. A new hour-long directors’ commentary that mixes tidbits of trivia with some in-depth discussion of the designers’ key creative decisions has also been released to all LiS players.

In all honesty, I don’t really care how you play Life Is Strange. Just make sure you do play it. This physical rerelease is simply a neat bit of fan service. Albeit one that further pushes the idea that Dontnod’s dynamic creation is built to last.

So is it? While LiS may not turn out to be the best choice-based video game ever made, right now it feels like the world champion in a field of one. Let the imitators follow. With any luck, I’ll bawl along to them too.

Best of the best › The 10 best games you can buy

Prepare to fall hard for a unique approach to storytelling