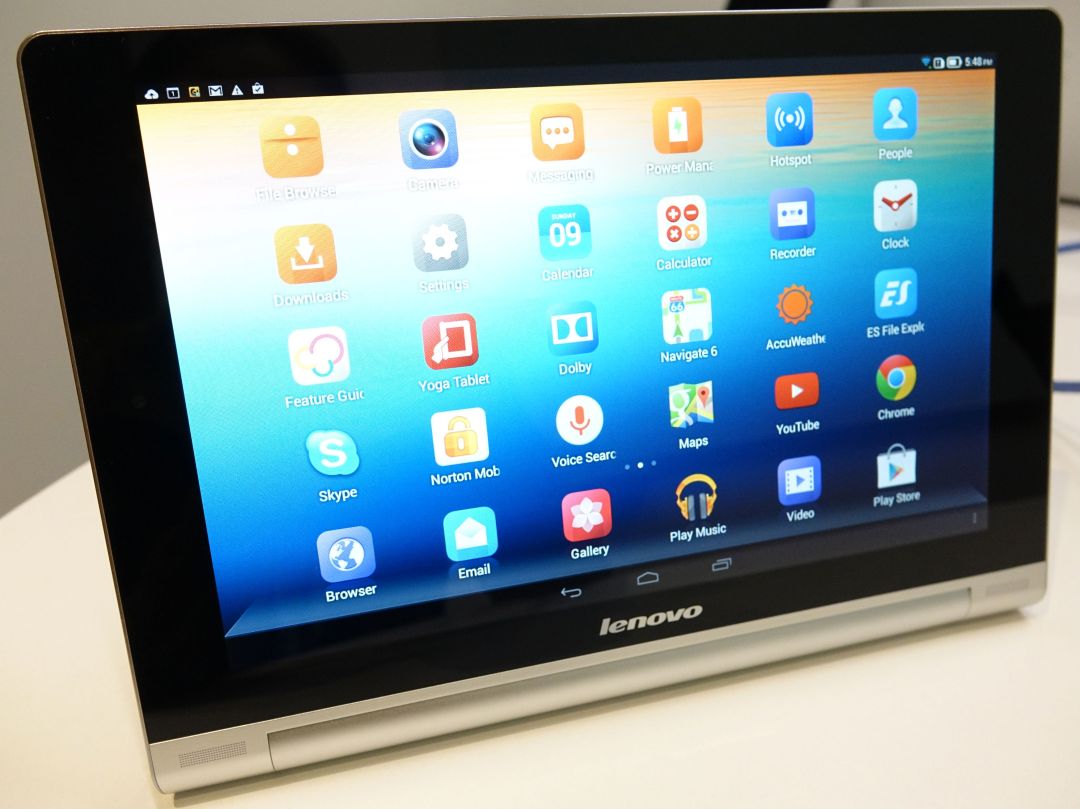 Besides having celebrity product engineer Ashton Kutcher’s mark on it (you have seen the smug advert, haven’t you?), this Yoga tablet’s claim to fame is its status as the Yoga line’s first “multimode” tablet.

Designed for the person perpetually on the go, the Yoga Tablet’s unconventional form allows it to be used in three positional modes. Combined with a lightweight design and purported 18-hour battery life, the idea is that this is about as portable and versatile as a 10in tab can be. And it’s mighty affordable, too.

But is this enough for the Yoga 10 to rise, wheat-like from the rest of the tablet chaff? Or is it simply a flashy suit on an otherwise ordinary gadget? We spend some time with the flexible device to see if it’s able to bend and break its competition.

Build: does my bum look cylindrical in this?

The cylindrical bottom of the Yoga Tablet 10 is the most obvious point of difference between it and every other tablet out there. The device tapers from a mere 3mm to 8.1mm to accommodate its barrelled bottom. At its thinnest, it gives even the iPad Air a run for its money. It also brings to mind memories of the elderly, ergonomically sound Sony Xperia Tablet S.

In terms of appearance, the Yoga Tablet 10 is hard to fault. The bezel could afford a little trimming to up the sleekness factor, but overall it looks more premium than its asking price might suggest, with a subtly textured back and sleek aluminium finish. And that nicely cushy power button built into one end of the cylindrical bottom is a nice touch that makes the best of its design.

Tucked away at the back of its cylindrical bottom is a built-in kickstand – a handy feature that could save you the money you might otherwise spend on a stand-integrated cover. To pull it out you’ll either have to work your finger into a thin groove, which is a frankly nail-breaking process, or you could wrap your hand around the cylindrical bottom and twist it out. The latter is probably the wiser choice, but as the barrel is completely smooth it can still prove rather tricky. A textured grip would have been sensible.

Modes: three is the ergonomagic number

Its built-in kickstand means the Yoga Tablet 10 can be used in three different modes: the usual tablet mode, stand mode, and tilt mode. That cylindrical bottom makes a world of difference when you’re holding it, providing a better grip than the thin edge of the usual tablet. Again, some texturing would make for an even steadier grip, but the size of it is just right and it feels very natural in the hand.