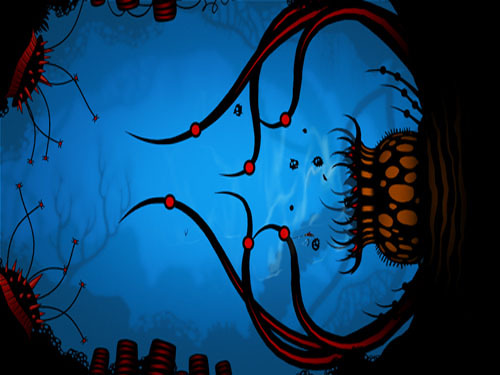 Insanely Twisted Shadow Planet wants to be different. It’s got a crazy name, a gloomy yet cartoony art style and a world that hums to the throb and clang of alien noises. It even refuses to introduce itself in words. Instead it silently shows a blob of intergalactic black goo blotting out an alien sun and turning it into an insanely twisted shadow planet.

Your mission is to explore the labyrinth of tunnels on the now darkened star in a flying saucer and find a way to tame the goo. The cavernous shadow planet teems with strange and dangerous life forms, from giant leeches that suck like vacuum cleaners to glowing balls with spiky shields that move like pond skaters. At first your flying saucer has nothing more than an object scanner  but as you drill deeper, new equipment is added such as a laser gun and an extendable claw for picking up objects.

Beneath its ‘I’m different’ appearance, however, this is really Metroid in indie drag – a 2D game where you explore, solve puzzles to access new areas and gain new powers. But it is very accomplished: every twist and turn brings a new encounter and the drip-drip of new equipment is expertly timed.

For all this craftsmanship, Insanely Twisted Shadow Planet is a glowing ember that never ignites. Pacing is its downfall. The speed and challenge rises so smoothly it’s almost imperceptible. There’s no sudden fluctuations, no peaks or troughs. Even the boss battles feel like they are on cruise control. And while story isn’t vital for a game like this, there’s little here to help you relate to your flying saucer which makes for a cold, flat experience, despite the imagination and polish. 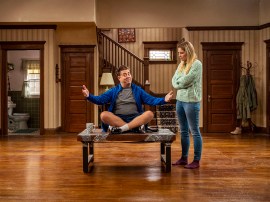