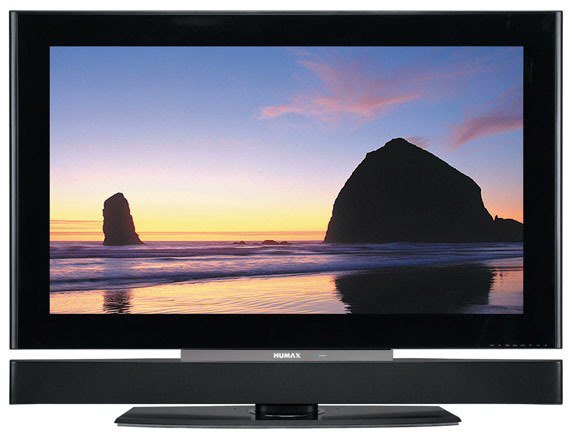 On paper, the Humax LP32-TDR1 looks great value. For well under a grand you get an HD-ready, HDMI-equipped set with a built-in digital TV tuner and 160GB disk drive. In other words, pretty much all your viewing and recording needs in a single box.

We all know that’s no good if it looks like something put together on Scrapheap Challenge, but luckily that isn’t the case here. Finished in a designer décor-pleasing black and silver, the Humax will slot into any self-respecting minimalist lounge, no problem.

Up and running, the Humax delivers a solid performance. True, it’s not quite up to the standard of more expensive rivals like the Sanyo CE32LDY1-B in terms of all-round ability, but it can still hold its own in most areas.

The Humax’s recordings are faithful at high quality, but switch to lower levels and you notice some deterioration. The visual quality drop is most noticeable with rapid action, in particular sports – not great for when you want to record Match of the Day while you’re out at the pub, then.

We suggest you stick to the higher modes, regularly purge the hard disk of any unwanted recordings (you’re not really going to watch the entire series of The Nature of Britain now are you?) and you’ll be fine. After all, 160GB is plenty to play with.

As far as picture performance goes, the Humax contains sufficient detail and composure. Feed it a DVD – or even better, an HD picture – and you get a sharp image with a natural colour balance.

You don’t, however, get the contrast levels or stability of some of its better rivals. This results in the dingier moments from the Lord of the Rings trilogy missing some insight from those all-important dark details.

That said, this is a well-conceived product, and it’s pretty well executed, too. If you’re after a reasonably priced TV and PVR combo, check this Humax out.

Sky+ has 160GB, Sky HD has 300GB but Humax’s latest PVR contribution has a giant 320GB of telly addict storage at its disposal.Replacing the Stuff.tv

Minds can get unnecessarily boggled deciding which combination of tech deserves to be the hub of their TV watching and recording life, but Humax has j