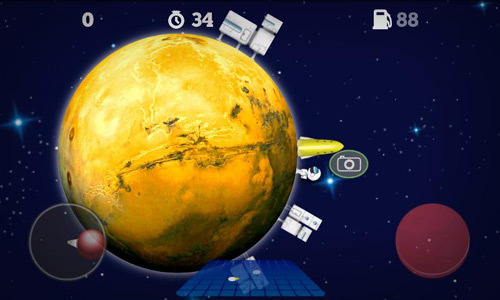 As fans of both space and taxis, we were naturally very excited when we first played Galataxi.

It’s not a complicated game – you fly a rocket, picking up passengers and dropping them off. The three types of passenger have different requirements – business’onauts just want to get from planetoid 8735A to planetoid 8735B, tourists prefer to hover close to small moons to take photos, and scientists like to do close orbits of planets to scan for life.

The trick is getting the hang of the game physics as the gravity of planets, moons and black holes pull you off course. To land on a planet, you aim for it, burn your rockets for a spell and then flip your craft around to land rockets down on the surface. Get the angle right and you can land as fast as you want, but get it wrong and you’ll bounce off into the abyss.

If you look closely, the planets and moons are all, in fact, actual photos of er, planets and moons. This is a nice touch, and though the rest of the game is graphically simple, it fits very well. On the most part, the sound design is good too, with a jaunty soundtrack and satisfying “tshhhh!” when your rocket locks onto a planet’s surface. However you’ll also hear fares grunting at you from nearby celestial bodies, which is a bit odd.

When we first started playing this, we found it hard – really hard. The time restrictions for each level meant that you had to bring your A-game and pull off a near-perfect run to progress. This meant a fair bit of frustration getting through levels, but most of them are so short that it wasn’t a problem. When we did absolutely nail a level, we were overjoyed. In fact, we’re pretty sure we would make brilliant astronauts. However, in the last week Galataxi has been updated. Now “due to popular demand” the time restrictions merely restrict your score to a one-out-of-three stars instead of failing the level. Now the only reason you might have to replay a level is if you run out of fuel.

To us, this strips the longevity of the game as it’s no longer a real challenge. Sure it can still be tricky to do a level well, but there’s no great incentive to do it perfectly. Couldn’t the developers have given some of the levels a few extra seconds instead?

It’s a shame because without the challenge it starts to feel a bit repetitive. Nonetheless this is a fun, well produced game that’s definitely worth taking a look at if you enjoy a good rocket ride like we do.