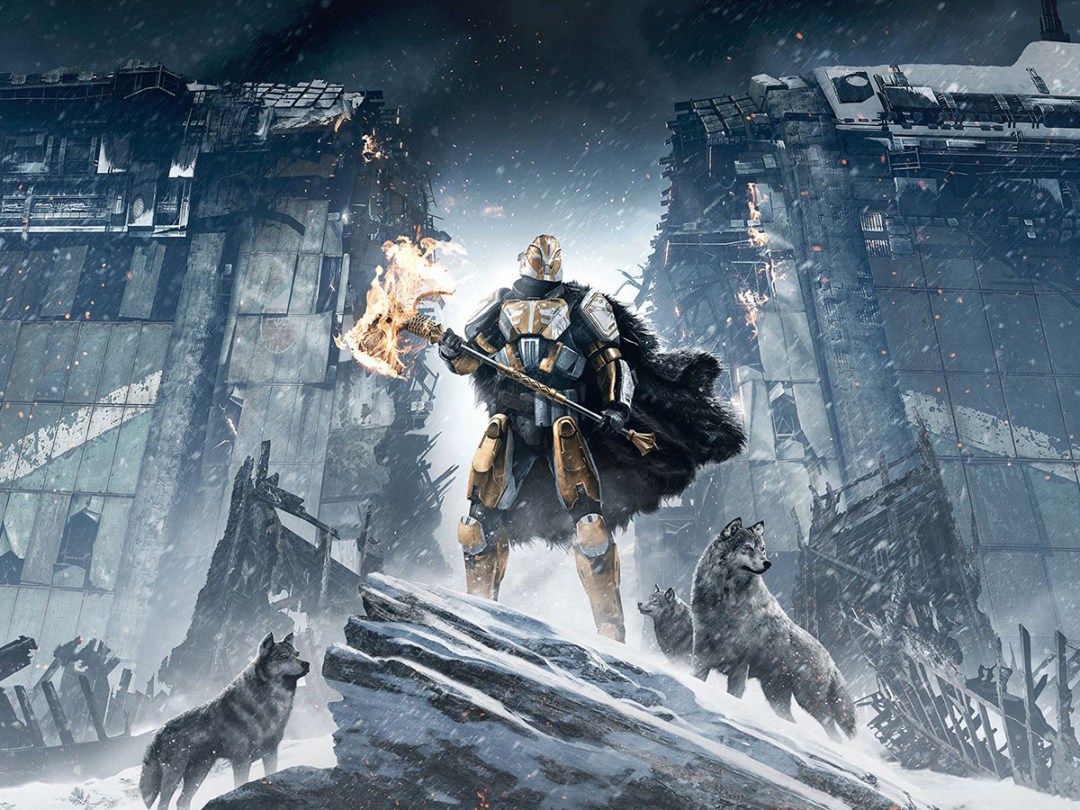 Before jumping into the latest expansion for Bungie’s Space Magic Monster Shooting Simulator (as the Stuff team affectionately calls it), my Destiny playtime was sat at 683 hours.

That’s almost exactly four entire weeks of non-stop space-slapping ugly aliens in the face – and looking fabulous in my Warlock robes while doing it, thank you very much.

The reason I’m sharing this guilty secret with you? So you know where I’m coming from. Until June, I’d exclusively played Destiny, pretty much since its launch two years ago. I finally weaned off it when I moved out and real life got in the way this summer.

With no new content giving me a reason to stick around, I was done. For a while, anyway.

I knew that Rise of Iron was always going to drag me back in – like many faithful Destiny players who have moved onto other pastures. But does it offer enough to keep us day one Guardians here for a fair while longer?

Like all things Destiny, Rise of Iron’s main story is thick with lore, pivotal characters you thought were nothing more than set dressing, and a big bad alien threatening to end the world. Again.

This time, you’re discovering the legend of the Iron Lords – a group of ten mythical Guardians who stopped the spread of a deadly viral entity called SIVA, many years ago.

Nine sacrificed their lives to seal the virus deep underground, leaving Lord Saladin (aka Lord Saladbar, organiser of the Iron Banner Crucible event) all on his broody lonesome.

Fast forward to you and your awesome space powers, and something’s not quite right. A group of Fallen have been snooping around, awakening SIVA and using it to enhance themselves with… well, lots of red, apparently.

Naturally, it’s up to you to stop them, and contain SIVA once and for all.

Sounds bleak, sure, but it’s honestly a welcome change from the dark, dingy, doom and gloom of the Hive, with all their goth skulls and torturous wailings.

The Iron Banner and its surrounding mythology has always been one of my favourite parts of the Destiny universe, so if you’re in the same boat, you’re in for a treat.

The new Iron Temple social space is particularly impressive, nestled into the side of the majestic Felwinter’s Peak mountain. It’s the sort of place one might go to to get away from spreadsheets and unpaid parking tickets. To relax, meditate, and contemplate one’s existence and universal purpose.

Oh, and it’s got bells to ring too.

That… is an excellent question. I haven’t dived into the grimoire – the expansive library of Destiny lore that’s criminally not available in the game itself – to find out. Crucially, it’s not quite properly explained in-game what, exactly, it is.

As far as I understand it, it’s a collection of sentient nano robots, which the Fallen have used to augment themselves with new powers and abilities.

Oh, and it also sprouts gigantic columns of what appear to be either red liquorice or strawberry laces, across the world. Yes, I have tried to eat them, and no, you can’t.

Let’s get this out of the way: Rise of Iron‘s main story missions are disappointingly short. It took three hours, tops, to blitz through them – and that’s including the time I spent faffing in the tower, checking out the new vendor gear.

Granted, this expansion is £10 cheaper than The Taken King, which was £35 on release, but you could feel a little miffed when you compare it to The Witcher 3‘s massive yet similarly-priced DLC.

Thankfully the campaign itself is engaging. The storyline isn’t groundbreaking, but it’s very well executed, and the visuals, environment and music are, as always, truly stunning.

I often found myself taking a break from shooting just to stare at the impressive sweeping vistas, and I really love the Game of Thrones-esque wolf symbolism running throughout.

It’s the polar opposite of the last expansion’s Taken enemies, which had drastically different abilities on top of a fresh new look. In Rise of Iron, everything seems pretty familiar.

Sure, Dregs now throw tracking grenades and Vandals shoot slightly different projectiles, but you don’t really have to change tactics to deal with them.

The new Plaguelands patrol area is a bit of a mixed bag, too. The Taken King‘s Dreadnaught was a brand new, exciting area, but here you just get a snowy, slightly tweaked version of Old Russia – the area Destiny players will have explored every inch of.

We’re not treated to a new planet, or even a different place on Earth. Not quite the breath of fresh air you might have hoped for, then.

Still, there’s more to Rise of Iron than giant red liquorice stalks. The Archon’s Forge area is an excellent example of open-world level design, with flowing lava lakes that’ll leave you mesmerised – until a pack of Dregs with serious attitude problems show up to ruin your day.

It’s here where you can team up with other players to farm gear, in what is essentially a series of miniature boss fights, complete with waves of lower-level enemies to make your life more difficult.

Think of it as a tweaked version of The Taken King’s Court of Oryx arena, albeit in a different location and with a Fallen theme.

You present the offerings randomly dropped by enemies in The Plaguelands to call forth a boss, with fights varying from easy to controller-throwingly difficult.

Wander in as four other players are already diligently grinding out round after round, and you’ll grab yourself some sweet loot in no time. Head there alone and you’ll soon be staring at the respawn screen.

Rounds are varied, hectic, and very fun, with a lot more colour than the gloomy halls of the Prison of Elders.

It’s annoying you need a key to open the door as well as an offering to summon the boss, though. On my first go, I waited too long after placing my offering – the gate sealed up, and I was missing my own party. I had to use up my only key to open the gate.

You need these keys if you die and respawn too, because it’ll kick you out of the Forge area, back to that pesky gate again. Your teammates can revive you, if they’re not too busy dying themselves, but it’s an extra layer of frustrating complication in an activity already reliant on getting lucky enough to have other people with you in the same instance.

Personally I agree with the reddit brigade – scrap the gate, scrap the keys. Let’s all just have some fun, eh?

NEXT ON THE TOUR…

Normally, after finishing the campaign and getting my brain around Bungie’s fiendish new Raid, I migrate back to the Crucible for some hectic deathmatches. This time, though, there’s a massive incentive to sit down and meticulously complete as many quests as you can.

Now, completing quests progresses you through your Rise of Iron Record Book – essentially a gold star system which gives you rewards depending on how much of the new content you’ve completed.

Right now, my two main life goals are to give The Rock a fist bump, and to walk around Destiny’s Tower in a full set of flaming warlock armour. Dream big, as they say.

In addition to the more meaningful quests, we’ve also got a new Strike and three new exotic weapon questlines – for the new, improved versions of the legendary Gjallarhorn, Khvostov and Thorn.

These exotic weapon questlines show Bungie at its best, weaving you through challenging missions with fresh content that really shows off Destiny’s storytelling chops.

The Khvostov quest in particular is fantastic, providing veteran players with plenty of nostalgia – fitting, given that the weapon itself is a remake of the very first gun each player picks up in the game as Kinderguardians.

Rise of Iron’s ornaments are essentially skins for your exotic weapons, drastically altering their appearance.

Sadly though, the ornaments in each box are randomly selected each time, so you might end up burning through a fair bit of cash if you’re after a particular ornament.

Destiny’s fast-paced competitive gametypes always keep me coming back long after I’ve exhausted the campaign content, and Rise of Iron’s selection of new maps will probably do the same.

There’s a new game mode to get your head around, too – Supremacy.

This is, quite literally, Call of Duty’s Kill Confirmed gametype, but with killstreaks exchanged for Guardian supers. Essentially, the aim is to kill your enemies, then pick up the orbs they drop to confirm the kill. Enemy players can steal your orbs though, so you have to be nimble to net both the kill and the orb, for extra points.

Playing it in a free-for-all Rumble match is, for me at least, extremely stressful, and while it’s fun, I personally prefer to just kill anything that moves on the opposite team without having to worry about anything else. Perhaps I’m just a man of simple pleasures.

I’m really looking forward to the start of the new Iron Banner tournament, which has yet to be confirmed, but until then, apart from the Supremacy game mode, Crucible remains relatively unchanged. That means it’s still worth grinding out for drops and exotic engrams using your Three of Coins.

Made it this far, but didn’t understand half the things I’ve been blabbing on about? Either you’ve never played Destiny, or left its iron grip long ago.

Let’s be realistic, though. You’re probably reading this because, like me, you’ve been a fan of Bungie’s universe for a long time, and you’re after a reason to come back.

If that sounds about right, then it’s definitely time to pick up Rise of Iron. There’s more than enough here to reel you back in, with plenty of fresh quests and gear to keep your Destiny addiction ticking over for a few more months.

Destiny remains, for me at least, one of the most polished shooters I’ve ever played.

The gunplay is just exquisite – every other shooter I’ve picked up in the past two years has felt lumbering and clunky in comparison. It always feels amazing to come back again after you think you’ve seen it all, just to rain death down from the heavens with bullets and magical powers.

I’ve yet to boost my light level high enough to try out the raid – but if Bungie’s past efforts are anything to go by, we’re in for a treat. Expect a review update once I’ve triumphantly crawled out of the red liquorice, covered in the blood of my enemies, and draped in glory.

See you then, Guardian.

A polished, must-buy update for the Destiny faithful that will keep you grinding for several more months

New environment is gorgeous, with a killer soundtrack to boot

Questlines are exciting and engaging, with plenty of rewards

Where are our new planets/locations?