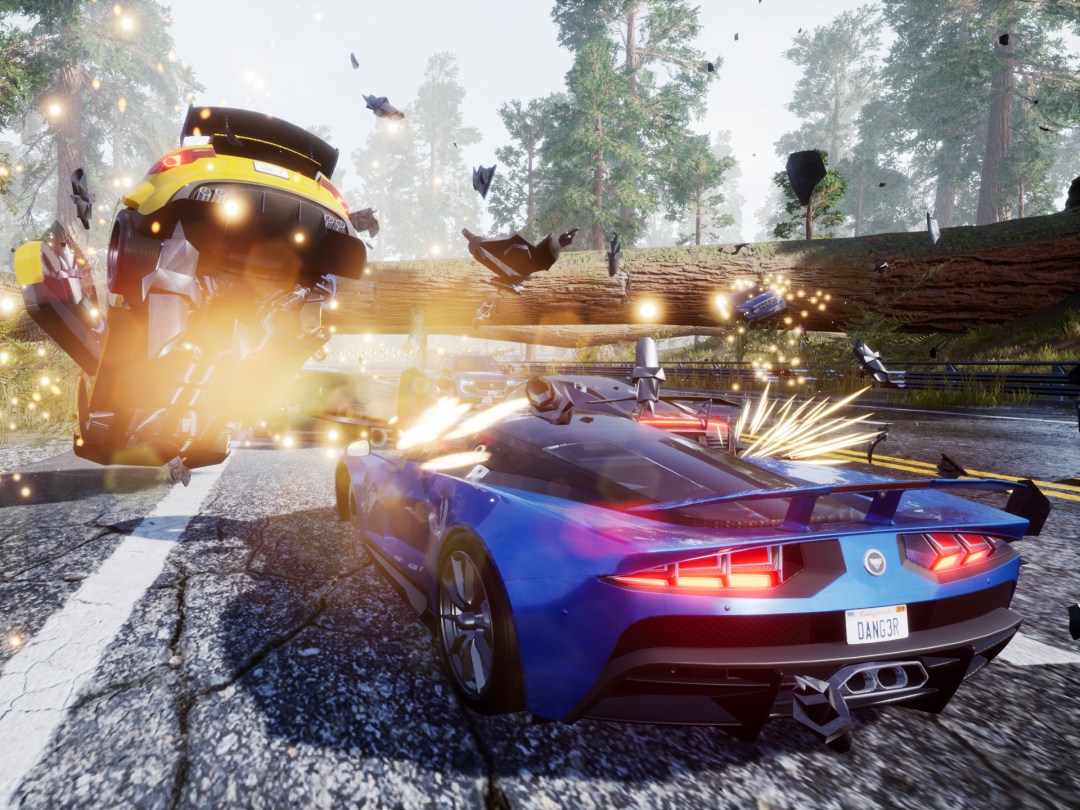 What happens when you take the creative leads from the beloved but near-forgotten Burnout series, team them up with a tiny handful of talented developers, and give them about a 100th of the budget of any typical modern racing game?

Well, you get Dangerous Driving (you’d probably guessed how this question-and-answer session was going); a game that captures the raw essence of Burnout and throws out almost anything else that would cost money, time or resources. Pretty impressive for a team of 7 people!

If you’re a true Burnout aficionado – and we’re not talking about those that tried the Paradise remaster for an hour on EA Access, we’re talking about those whose eyes bled trying to get through three levels of the original, those who chained boosts in Point Of Impact, who wowed at takedowns in… Takedown, and smashed through traffic in Revenge.

If you’re one of those people, then taking your first corner in Dangerous Driving will hit you with a rush of nostalgic confusion – did those games really feel like this? Could I really grip the road like this?

If anyone should know, then it’s the very people who made that handling model in the first place. After a couple of races slamming into barriers of careening headlong into traffic, Dangerous Driving‘s immaculate handling comes into its own.

It truly doesn’t feel like anything other than Burnout, even eschewing Criterion’s NFS games’ e-brake, and what at first feels both sticky and slidey soon becomes second nature, as you drift through corners at 200mph or snake between trucks with nano-second differences in braking time. It’s the right kind of throwback.

Takedowns have been a Burnout staple for a long time, and they are a central element in almost all of Dangerous Driving‘s suite of modes.

You know what to do – pull up alongside an opponent, slyly lean them towards the barricade, and then delight as the camera cuts to a shot of them, obliterated, in mid air, as the word TAKEDOWN appears on screen and your boost bar replenishes itself like a telescopic Wotsit (or Cheeto for our American friends).

What’s new here, though, is that cars you have taken down actually remain on the track. So do you risk smashing all your opponents in the first lap of a race, because then you’ll have to dodge all their smoking wreckages on your second go around?

Of course the answer is still yes, but it makes for a more dynamic race than even the most hardened Burnout veteran is prepared for. This is great idea, but the inclusion of a out-of-the-box orchestral stab when you nail a takedown is most certainly not – it makes Dangerous Driving sound like a FTP mobile game. Hopefully one day it’ll get patched out.

Considering how small Three Fields Entertainment is, a mere 7 developers doing everything, it shouldn’t come as a huge surprise that Dangerous Driving feels a little rough around the edges.

While it’s a fine-looking game, it has menus that wouldn’t seem out of place on the Google Play store, a career-mode that’s about as structurally adventurous as plank of wood, and literally no music at all, unless you count the aural horror show that plays over the title screen.

Instead, soundtrack duties are handed over entirely to Spotify, so those who have premium accounts can whack on their favourite playlist and directly skip tracks from within the game. So, if you have Spotify, Dangerous Driving has one of the finest soundtracks around, whether you’re into Travis or Travis Scott.

For everyone else, the races play out in eerie silence, punctuated by tinny engine noise and low-key spot effects. If this is the cost of entry for a tiny team to recreate much of the magic of Burnout then sobeit, and of course the game does come in at a budget price, but fair warning – without a Spotify account, expect almost no atmosphere whatsoever.

As it stands, or drives, Dangerous Driving only has a rigid campaign, where you battle through its various modes (race, pursuit, road rage etc) in one style of cars before unlocking the next, all the way up to the Formula 1-style speedsters at the end.

In a world where Forza Horizon 4 seamlessly interconnects online and offline across a vast open recreation of the UK, it does feel a little sparse. But again, this is the nature of the beast – the team has done everything it can with its extremely limited resources, and focused on the feel of the driving, and indeed nailed that feel.

Multiplayer is actually due to be patched into Dangerous Driving in the future, but whether the studio has the raw resources to maintain the kind of online infrastructure we’re used to in 2019 is to be seen. So as it is, Dangerous Driving is about as bare bones as a Skeletor at a nudist camp, but you can’t fault the purity of its intent.

Considering how few people actually work at Three Fields Entertainment, it’s a miracle Dangerous Driving exists at all, letalone manages to capture the speed, fury and thrill of Burnout so beautifully.

It may lack in production value, have a few physics bugs, and only features a very old-fashioned career mode, but it still has the magic that has kept Burnout in fans’ minds for over 15 years. Go in knowing what to expect, and indeed what not to expect, and you’re left with a fiery, frantic drive that will hopefully only get better in time.

It’s Burnout on a budget, but those looking for a meatier package are going to be left disappointed

No music or atmosphere