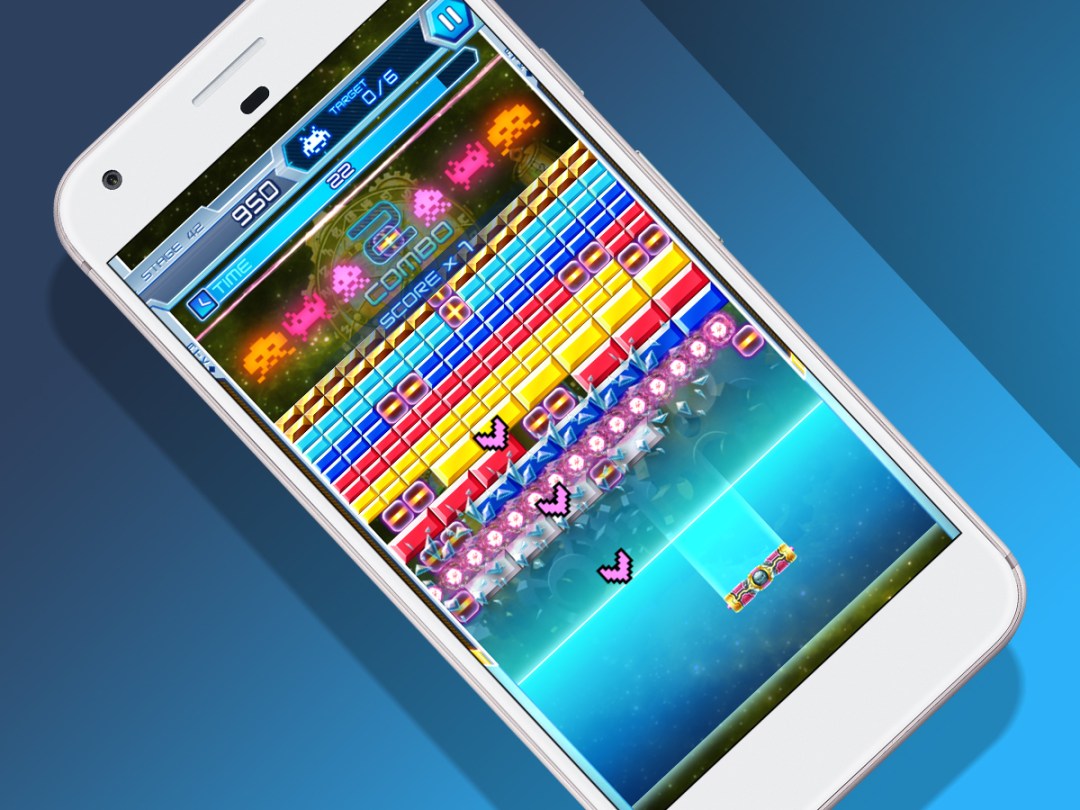 Arkanoid! Space Invaders! If you’re of a certain vintage, your happy place may warm on hearing such ancient (in gaming terms) names. Yet even if you’re sickeningly young, such classic titles are subsumed into gaming’s collective memory to the point they’ll pique the interest. But what happens when you smash Arkanoid and Space Invaders together? As it turns out, good things.

Space Invaders, of course, features rows of aliens trying to take over the world by doddering back and forth, dropping bombs at your underpowered weapon. Arkanoid is a flashy take on brick-basher Breakout, set in space. The conceit in Arkanoid vs Space Invaders is the invaders are back; and for some reason the last line of defence is the bat-like Vaus spaceship from Arkanoid.

No, really. It turns out when the universe is threatened by hordes of hostile, heavily armed craft, the best the good guys can do is furnish you with a lozenge-shaped ship to bat back projectiles. Government cuts, eh? Still, it makes for a compelling mash-up of genres – albeit one that’s initially bafflingly dull.

At first, only a few invaders mooch about. You smack their shots back at them. They explode. Rinse. Repeat. Yawn. But stick with it, because the game’s just warming up. Around the 20- or 30-level mark, something interesting will likely happen: you will die.

This is a good thing, but initially comes as a shock, given how easy the early levels are. You then abruptly recognise your enemy isn’t the invaders – it’s the clock. If that runs dry before you succeed in your mission – eradicating up a specific number of invaders or all of the bricks – your Vaus shrinks and disappears as quickly as your ego.

You see, Arkanoid vs Space Invaders is smarter than it first appears. You can’t just blow everything up willy-nilly. As the pace ramps up, the game becoming an increasingly frenetic blur of neon, you’re forced to rapidly strategise. You must figure out how to meet your goal in very limited time, which often counter-intuitively means keeping powerful invaders alive for longer (since they fire the most destructive projectiles).

As you progress, the game keeps shaking things up. Bricks start moving, and some are unhelpfully indestructible. You counter with bombs that take out entire rows of bricks, and switches that instantly transform unbreakable objects into ones you can smash.

There are cameos, too – collectable Taito characters that power up your Vaus. It turns out Bubble Bobble’s Bub is a mean shot with bullets rather than just bubbles; and Nico from Spica Adventure is a boon when you use a massive space bow to bounce a charged shot around, during which the game very much recalls its Arkanoid roots.

Beyond that, there’s a hard mode for pros, and a breezy arcade test for high-score chasers. And while the game doesn’t quite reach the dizzying levels of glee found in Space Invaders Extreme and Space Invaders Infinity Gene, it runs both titles close. If nothing else, it showcases how to update ancient games for mobile: retain their spirit; aim for loads of giddy fun; and use a Vaus to smash free-to-play to smithereens.

Arkanoid vs Space Invaders is available for Android and iOS.

Simple to play; tough to master

First half hour is a bit dull

Controls can clash with Control Center on iPhone