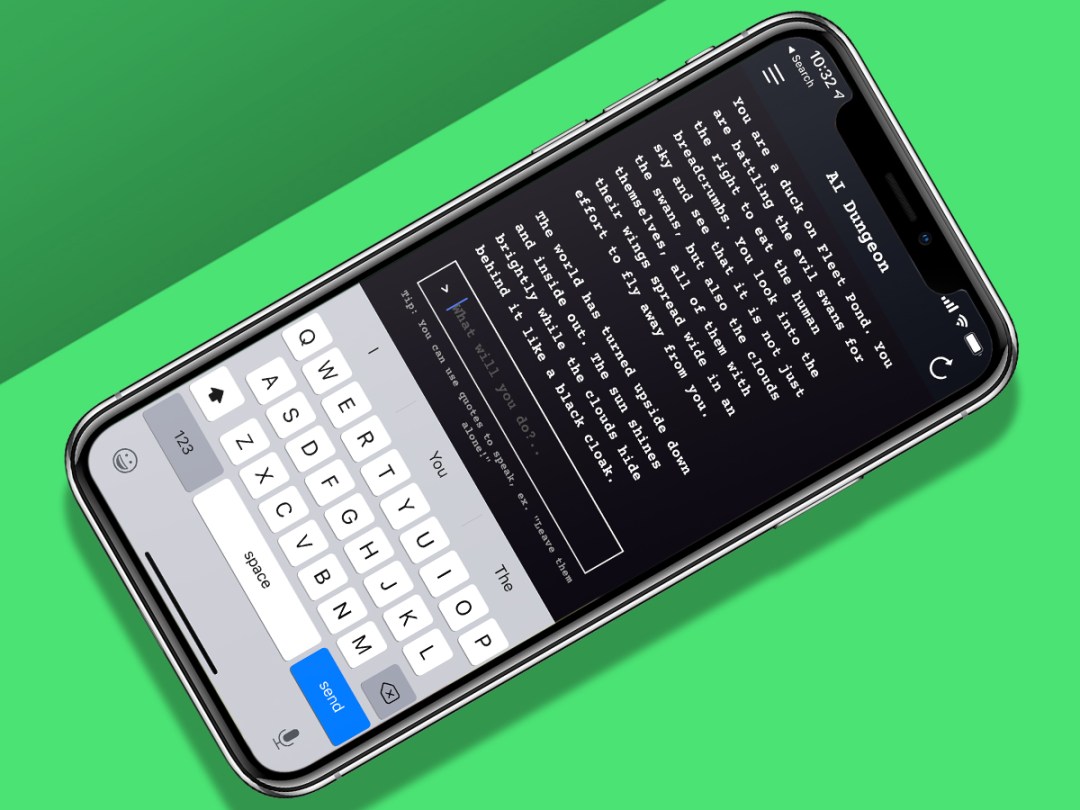 Early home computers had the visual clout of a calculator. The most immersive gaming worlds largely existed as text adventures. In the likes of Zork, you got an interactive novel, and worked your way through the narrative by typing commands and solving puzzles. AI Dungeon drags the genre into the present day.

You might – rightly – note modern takes on old-school adventures already exist. 80 Days, for example, reimagines the text adventure by adding the kind of dynamism, pace and text tree that would have been unthinkable in the late 1970s. Ultimately, though, like the classics that inspired it, 80 Days is still an adventure with finite options, written and fine-tuned by humans. AI Dungeon is neither.

Everything that arrives from the depths of AI Dungeon spews from OpenAI’s text generator, which has been trained on reading the internet. You kick off a story by selecting a setting – fantasy; mystery; apocalyptic. One brief intro later, you get a prompt, asking what you’d like to do next.

From this point, the AI responds to your inputs – entirely on the fly. Amazingly, it manages to keep a handle on situations, characters and objects – at least to some extent. Imagine a book, but instead of being a static object of ink on paper, it’s written while you wait, by a room full of unhinged authors hopped up on sherbet and gin. That’s AI Dungeon.

By way of example, one of my adventures was set in a post-apocalyptic world. AI Dungeon whisked me away in a helicopter and for a short while couldn’t make up its mind whether I’d witnessed or been a victim of a plane crash. Frankly, it didn’t seem to matter all that much, because another abrupt shift that upended everything occurred before long.

Such issues might seem like shortcomings, but they really aren’t. Embrace AI Dungeon’s nature and you realise it’s an endless world of dreamlike storytelling, and a fascinating glimpse into the future of AI. This is all further enhanced – significantly – by the means to create custom stories, which you can publish for the entire world to play.

These work particularly well when AI Dungeon can draw from plentiful online lore, but even the mundane can prove interesting. I created a story based around the Stuff office, and Hot Stuff editor Matt Tate started gleefully calling himself “Granny Tickelface”, and boasting his new computer “made people do things”. I then kicked off a tale where I was a duck. AI Dungeon instantly went weird, talking about clouds “with their wings spread wide in an effort to fly away from you” and an upside down world where “the sun shines brightly while the clouds hide behind it like a black cloak”.

Not a game to download if you hanker after the conventional, then. But if you fancy some reading that’s endless and frequently quackers, AI Dungeon is a must-have.

AI Dungeon is available for Android and iOS, and can also be played in browsers.

Can be slow to respond