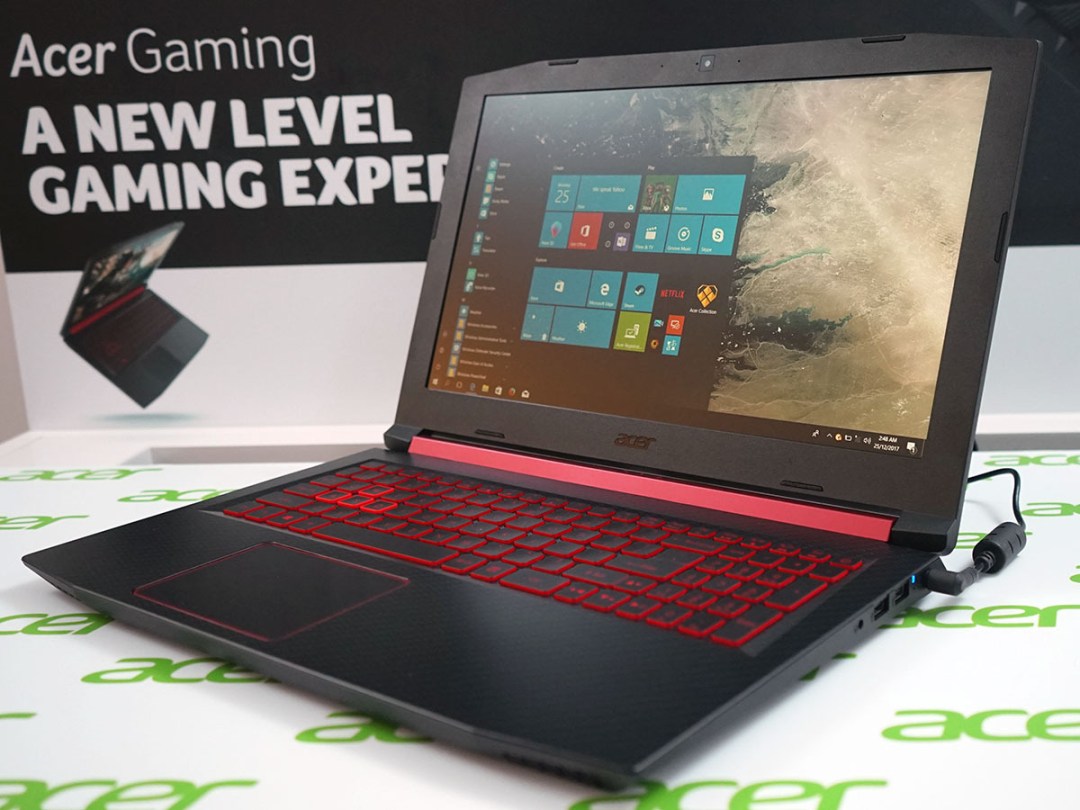 Gaming laptops normally cost more than the GDP of a developing nation, and draw enough juice to make the lights flicker whenever you plug ‘em in to the mains.

Do you really need all that power, though? If you’re esports mad and spend your evenings in front of Overwatch, Rocket League or Player Unknown’s Battlegrounds, a top-end machine is probably overkill.

That’s pretty much the aim for Acer’s updated Nitro 5, an entry-level gaming machine that’ll happily play your multiplayer matches at 1080p, without forcing you to remortgage the house to afford one.

We got the chance to try one out at CES in Las Vegas, in order to see if it really can deliver those all-important frame rates.

The Nitro 5 is Acer’s first all-AMD gaming machine, with a Ryzen CPU and Radeon graphics – a combination that helps keep the price down, but one that can still cope with most games.

OK, it might struggle with The Witcher III once you’ve turned all the details up to full, but it’s perfectly suited to a spot of PUBG action. At 1080p, most games should be playable at either medium or high detail settings.

Not that Acer had anything installed on the demo unit in order to prove it – apparently it was a pre-production sample that didn’t have the right drivers, so gaming was off the menu. That means we can only go by benchmark results, rather than seeing for ourselves, but on paper, there’s not much else around for the money that can keep up in games.

On the desktop, at least, the Ryzen CPU will cope with just about any day-to-day job, and the multi-core setup means more intense tasks like video editing or streaming should be fine, too. You can spec it with up to 32GB of RAM and 512GB of SSD storage. More affordable models will arrive with 8GB of RAM, but that’s still plenty for most games.

It’s a gaming laptop, of course, so battery life isn’t going to be outstanding, but the Nitro 5 should still manage a few hours away from the mains.

That hardware is paired with a 15.6in, 1920×1080 resolution TFT screen. It’s a decent panel, with great viewing angles and plenty of brightness. Colours look fairly vibrant, but contrast could seems very dependent on the angle of the screen.

The main thing here is that resolution – it makes sure the hardware isn’t working too hard to render your games. Image editing might be better on a higher res panel, but you can still get by at 1080p.

The built-in speakers are decent enough for YouTube videos or the odd Netflix boxset binge, but you’ll want to plug in a pair of headphones once your games have loaded.

The keyboard has bright red WASD keys so you don’t lose your position when playing, and the touchpad is a decent enough size for getting around the Windows desktop. You’ll still want to plug in a mouse for any serious gaming, mind. A keyboard shortcut disables the touchpad so it doesn’t get in the way, too.

The keyboard is pleasant to type on, with plenty of feedback from the firm keys, but it’s a shame there’s no backlight for working (or gaming) in the dark.

It’s not overflowing with ports, but three USB ports, one USB-C, a card reader, Ethernet port and HDMI out will get the job done.

Not everyone can afford a monster gaming laptop, so it’s great to see Acer delivering 1080p performance at a reasonable price. The Nitro 5 might not be the prettiest or lightest laptop around, but if you want high frame rates, those are sacrifices you’ll have to make.

The Nitro 5 will arrive in the UK in April, with prices starting from £899. We’re hoping to get one into the office closer to launch for a full review.