LG’s brilliant CX series OLED TVs are some of our favourite 4K panels. And they’re about to get even better for gamers: from next week, LG will start switching on 4K at 120Hz with Dolby Vision via a firmware update.

What does that mean? If you’ve got one of LG’s CX or GX sets already on your wall, you’ll soon be able to enjoy 4K pictures broadcast in Dolby’s HDR format at the fastest frame rates. That means super slick visuals with reduced motion blur.

More importantly for gamers, it translates to ultra-smooth graphics and a more responsive experience – whether you’re pew-pewing baddies or hacking it around a race track.

You can see clearly now (or very soon)

Both the PlayStation 5 and the Xbox Series X support 120Hz signal output, but the power required to deliver those frame rates means many games drop down to resolutions of 1080p or 1440p when running at the fastest frame rates.

What’s special about the LG announcement is that it means you’ll be able to get the full trio: 120Hz frame rates, 4K resolution and Dolby Vision HDR for wider dynamic range. That means slick, sharp and vibrant pictures when playing compatible games on a next-gen Xbox that’s hooked up to a spare HDMI 2.1 port on a CX or GX series TV.

Dolby Vision gaming became available on the Xbox Series X and Series S at the end of September, with more than a hundred titles supported (or very soon to be). Among the games immediately available with Dolby Vision are F1 2021, Microsoft Flight Simulator and Borderlands 3.

What about PlayStation gamers? Sony’s next-gen system doesn’t support Dolby Vision, just regular HDR10. Microsoft has confirmed that there’s no exclusivity between it and Dolby, though, so the way is technically open for Sony to add Dolby Vision support to its console. Until it does, 4K Dolby Vision gaming at 120Hz is reserved for Xbox users.

LG already rolled out support for 4K at 120Hz with Dolby Vision on its 2021 OLED TVs earlier this year, with a firmware update unlocking the enhanced performance on its B1, C1 and G1 sets. The upgrade for last-year’s CX and GX models is set to start ‘very soon’ in South Korea, with a global rollout following from next week.

Explore the dazzling television tech that trips the light fantastic 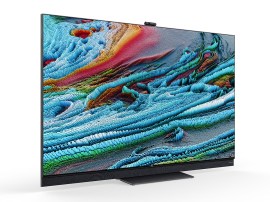