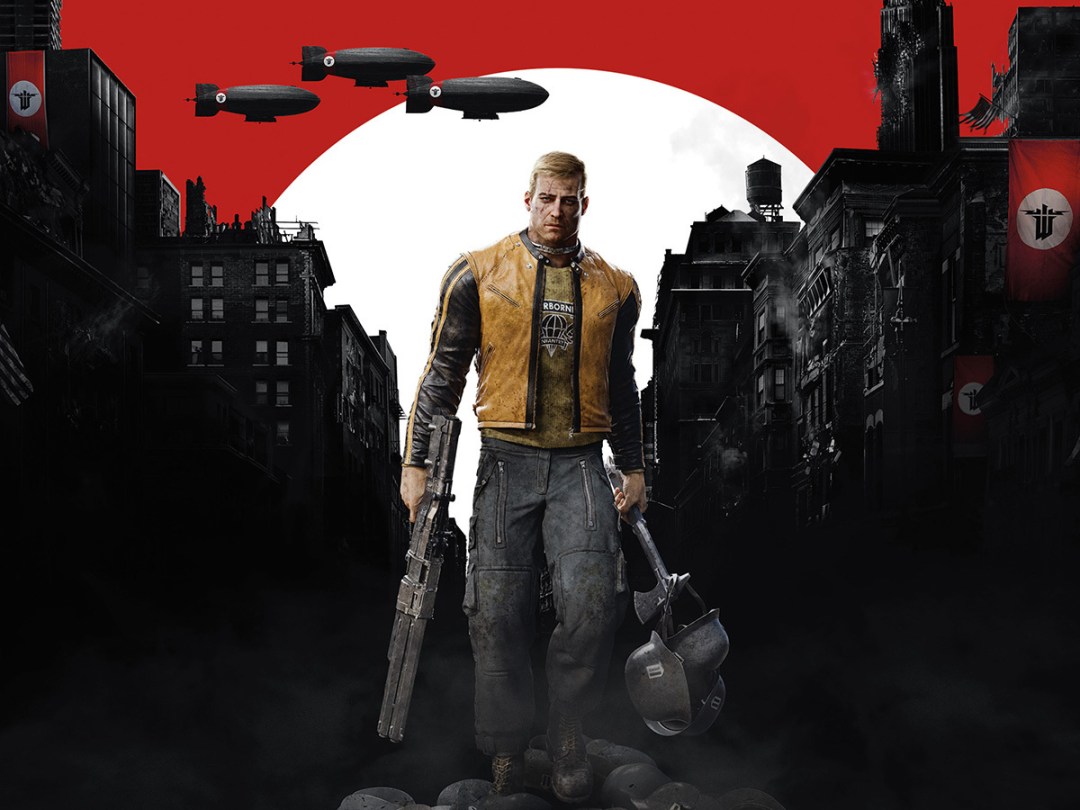 Not much was expected from 2014’s Wolfenstein: The New Order, but the sleeper hit shoot-em-up had an engaging story, excellent gameplay, and a battle-scarred beefcake protagonist who I loved.

And not just because every third sentence to leave his mouth was a profanity-riddled pop shot at his Nazi foes.

Now I’m back in the (presumably massive) boots of BJ Blazkowicz for the follow-up, Wolfenstein II: The New Colossus, which picks up right after the events of the first game. This time BJ has left Europe and is taking the fight to America, where the state of play is no less bleak for anti-fascists. But hey, at least it should make for a riotously entertaining action romp.

After an hour with Wolfenstein II at a recent Bethesda event, I initially found it to be a frustrating exercise, but came away from the demo desperate to see what happens next.

Wolfenstein II: The New Colossus, like its predecessor, is set in an alternate 1960s timeline where the Nazis won World War II. We know from experience (Tarantino’s Inglorious Basterds, The Man in the High Castle) that rewriting one of the 20th century’s most significant events, when done properly, is a bold and adventurous narrative approach, and straight away I was hooked.

Technology in this new world order has advanced at an unprecedented rate, meaning your biggest threat comes not from the swathes of enemy soldiers, but the giant mechs that regularly fight alongside them. In the demo I played I was dropped into a barely recognisable New Orleans and tasked with rescuing Horton, a key figure in the local resistance group.

The cutscenes are fairly lengthy, but not once did I find my finger itching to jab a skip button. Let’s just say that one scene saw Blazkowicz interrupting a full-frontal moment in a submarine, while in another, a booze-fuelled back-and-forth between our hero and his new comrade is soundtracked by both relentless gunfire and freewheeling New Orleans jazz.

The city itself may be a burning ruin, but its spirit remains.

The game has a bizarre of humour, but it’s also telling a very human story. There’s so much at stake for the rebellious heroes, and you want them all to get out alive.

Gameplay in The New Colossus, as its central character will often remind you, revolves mainly around killing as many Nazis as possible.

I don’t know exactly how far into the game the New Orleans section is, but I’m told at the start of the demo that I need to go into the menu and spend the entirety of my weapon upgrade points – because this isn’t going to be a cakewalk. Sure enough, in the first 10 minutes I was seeing the retry screen with pathetic regularity.

Slow and stabby won’t win the race, but by opting for a stealthier approach you can pick off weaker enemies and readdress the balance a bit. When your cover’s blown – and it inevitably will be – success in combat depends on effectively mixing up your weaponry.

You can dual wield near enough any combination of guns in your arsenal, and once you’ve settled on one you like – the semi-automatic Schockhammer shotgun and Maschinenpistole worked like a dream for me at close range – you can put down the Panzerhund flashing its bone-shattering jaws at you in no time at all.

Every weapon feels great to use, and by the time I got my hands on the LaserKraftWerk, a stupidly powerful prototype that can incinerate both doors and people at the pull of a trigger, I’d decided that perhaps ol’ Blazko was still a badass after all.

Wading into a firefight with a different instrument of destruction in each wrist is all well and good, but quickly I realised the main man’s most effective weapon is himself.

The first augmentation I got to play around with was a pair of stilts. Turning yourself into a towering military circus man carries with it all the tactical disadvantages you’d expect, but it also gives you a much clearer picture of what’s in front of you. I liked popping up, spraying a few rounds at anything that moved and kamikaze sprinting until I found a wrecked car to take cover behind as I disengaged the suit. It’s ridiculous, but exhilarating.

And that’s just scratching the surface. The Ram Shackles grant you the ability to smash through walls and Nazis alike, while the Constrictor Harness enhancement – which I sadly didn’t use in my playthrough – lets you squeeze through tiny holes to surprise attack oblivious Nazi forces. I have no absolutely no idea how it works, but I don’t think I care, either.

It took me a while to get my head around combining the multiple dual-wielding options – choosing the weapons on the fly felt slightly cumbersome – with making the most of stealth opportunities and my mechanical abilities, but once it all clicked, I was leaping around like a veteran super soldier.

In a clever twist, the final stretch the preview build I got to play had me mount one of the very same Panzerhunds that was trying to chomp my face off at the beginning.

Brief though the section was, roaming through the streets on the back of this futuristic fire-breathing robot of war, watching it lay waste to the evil regime that built it, was pretty great. I’m hoping there are more moments like this in the game. Flamethrower doggo is where it’s at.

The New Colossus is an unapologetically old-fashioned shooter, but there’s an open-endedness to its gameplay that keeps it feeling fresh. It can be punishing, but not unfairly, and experimentation is nearly always rewarded.

Want to sneak around grabbing unsuspecting Nazis by the throat? Go for it. But when it goes wrong, you’ve always got the option of activating your Battle Walker stilts and doubling up on Sturmgewehrs. Whatever floats your boat. And grim as it was to explore this dystopian, Nazi-ravaged New Orleans, I was blown away by the visuals.

There’s a distinctly B-movie feel to the cutscenes, but that’s no criticism. Every character I came across was memorable, and I’m looking forward to seeing where developer MachineGames takes the story. In what’s been a relatively quiet year for first person shooters, Wolfenstein II: The New Colossus could be exactly what fans of the genre are looking for.