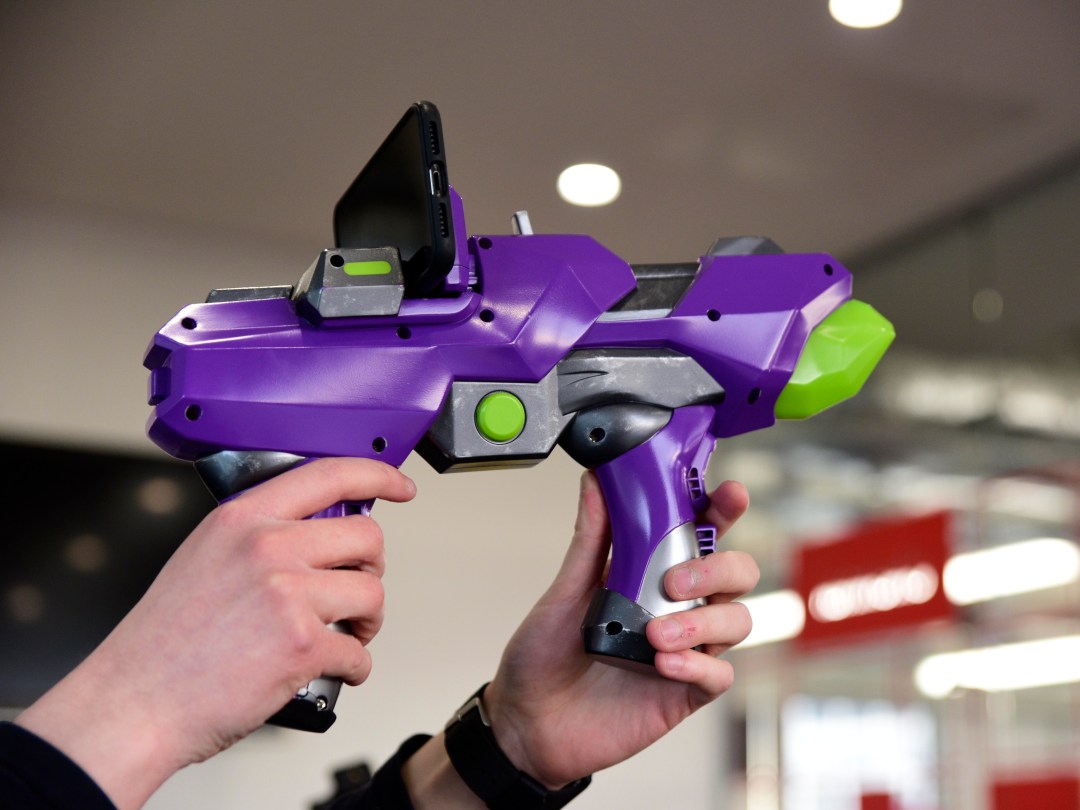 Something tells me you didn’t get an Oculus Rift or HTC Vive for your child last Christmas.

Whether it’s the eye-watering cost, the impracticality of setting it up in your home or the fear of motion-sickness ‘issues’, there’s a fair few reasons why you may baulk at the purchase of one of those high-end VR headsets. Still, such perfectly valid reasoning likely isn’t enough to put a stop to your kid’s nagging.

Fortunately, there’s a new toy on the way that may well solve all the downsides above: the Merge 6DoF Blaster. It may just look like a simplistic plastic toy at first, but slip your smartphone in and it turns into an affordable VR-esque shoot ’em up.

OK, so it’s not going to be anywhere near as immersive as something like the HTC Vive, but after spending an hour with the 6DoF Blaster I’m happy to report that this upcoming toy still offers rip-roaring fun.

This Blaster looks like something straight out of Futurama. It oozes sci-fi style with its purple and green colour combo, yet looks cheesy enough to prevent it looking hostile.

How does it feel? Well… like a children’s toy – but that’s not necessarily a bad thing. Its plastic build feels robust enough to survive several clatterings and it’s incredibly light, so it won’t hurt if flung in your direction.

On the downside, though, the buttons feel rather clunky and require a firm squeeze to work. The reload button particularly feels unresponsive, which frustratingly left me vulnerable to waves of laser fire on a number of occasions. You’ll have to give the button a proper bash to ensure a restock of ammo.

Since the 6DoF only costs $40, this slight grievance is totally forgivable. This is not a premium gadget after all, but a toy built to withstand heavy-handed children – and it’s mission accomplished in that department.

How it works: Lock ‘n’ load

OK, so right now it just sounds like your average plastic toy gun. Big deal, right? But slot your smartphone in at the top, with the accompanying app loaded, and your living room will turn into an epic battleground. There’s no reason to worry about your phone slipping out either. Despite my erratic movement, the phone never once threatened to slip out of place.

During the setup of a game the app will analyse the space available to you and adjust the size of the game’s arena accordingly. Still, if you don’t want a vase getting smashed, you’ll probably prefer your kid reserve this toy to their bedroom or garden.

By using your smartphone’s positional tracking technology, the game will react to your movements just like how a virtual reality headset would. See that plasma bolt coming straight for your head? Duck in real life, and you’ll be able to dodge it in the game too. You’ll even be able to move to cover and peer over the top for a great vantage point.

Tracking was seamless and coped well with my sharp turns as I fired a barrage of lasers at my foes. Saying that, this is more down to the tech stuffed inside the smartphone I was using. See, the 6DoF has no tech wizardry inside – not even Bluetooth. Pressing each button simply uses mechanisms to prod your phone’s touchscreen. You could actually play this game by just holding your phone instead, but that’s nowhere near as fun as holding a gun.

Is my phone compatible?

The app for the Merge 6DoF Blaster will be available on both iOS and Android stores, so there’s little concern on the software front.

However, you will need a smartphone with positional tracking capabilities. Fortunately most smartphones released in the past few years should tick this box, so you’ll only really have problems if you’ve still got something like an original iPhone or jumped aboard the Nokia 3310 hype train.

The games: A real blast

Unfortunately, I wasn’t able to have a go on a full-release game with the Blaster. Instead I was let loose on a demo that has an uncanny resemblance to VR game Superhot. The demo’s visual design is incredibly simplistic, while enemies resemble faceless mannequins.

Unlike your average dummy in Topshop, though, these are equipped with laser guns that can kill you in one shot. Shoot them and they’ll explode into shrapnel with no blood or gore in sight. I’ve been told to expect more child-friendly foes in future games, so you can feel rest assured that there will be no Call of Duty clones appearing on this Blaster.

Even though I didn’t get to experience a full game, I still had a lot of fun with the demo. It was split up into several stages, steadily introducing me to new mechanics as I progressed. First off you can aim and shoot – easy peasy – but then it had me slowing down time and zooming in with some of the Blaster’s extra triggers.

By adding these features, Merge has given a basic shoot ‘em up some welcome depth. Don’t think you can go Matrix-style whenever you want though. Slowing down time drains your power-up metre so you’ll need to use it wisely – seriously, this game can be tough.

The sign of a good toy is whether the parent will be tempted to send their kid to bed early to have a go on it themself. With the Merge 6DoF Blaster in your house, your child will never see past 6pm again.

Sure, the gun feels distinctively cheap and plastic, but as soon as you get immersed with the shoot ’em up game you’ll feel as if you’re holding your very own plasma rifle.

My only real concern is whether there will be enough games to get the most out of the Blaster, as I blitzed through the demo in 20 minutes.

But If Merge nails the software side, then you’ll have the one of the most fun and affordable ways to get immersed in a virtual world. Hopefully that’ll silence your little one’s pleas for an Oculus Rift.