LG seems to be taking music very seriously. Not that it’s taken out a subscription to the NME, bought a secondhand Stratocaster and stopped using soap; just that its latest music phone is fair brimming with MP3 know-how.

There are controls and a decent little screen on the outside of the flip, so you don’t have to open up your mobile for a quick blast of Snow Patrol. The PC software for transferring tracks isn’t even that bad – it’s certainly fast, at any rate.

The headphones could be a lot worse but they are pretty tinny and plug into a proprietary socket on the side. Still, you can use A2DP to go wireless, so that’s no biggie.

There’s also a card slot – for TransFlash – located on the side, rather than hidden under the battery. Shame no card is supplied , and if you do pick one up it’ll only take a maximum of 512MB.

And now the bad news…

The shame of it all is that, without the MP3 player, this is a horrible phone. There are just too many buttons to press for different functions and it takes ages to get used to where they are.

It’s also one of those annoying clamshells that doesn’t seem to open far enough, so you have to tilt the keypad at a funny angle to look at the screen. It’s strange but, even though it’s not a big phone, it feels porky.

A double-edged sword, then, with one side looking to cut your hand and test your tetanus jab, the other helping to carve your Sunday roast.

LG’s best ever tablet wants to knock chunks out of the iPad Mini and new Nexus 7 with first-rate specs, but it’s the build quality that impressed us most at IFA 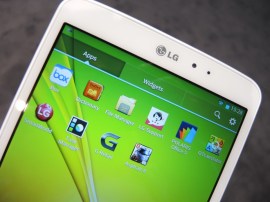