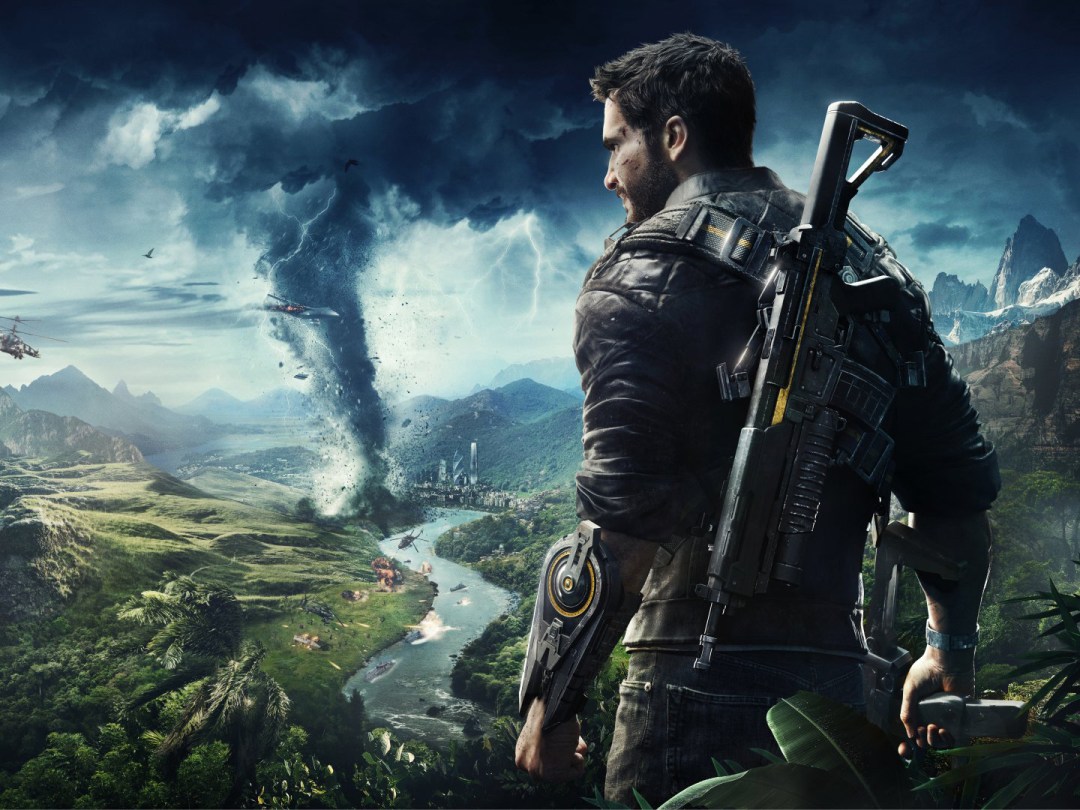 Rico Rodriguez is not a normal person.

He probably was once, but now, as he falls from lethal heights, grappling from point to point, destroying communist juntas and eating dictators for breakfast like normal people do with eggs and soldiers, he’s a stone cold killing machine.

As an open-world sandbox that ignores reality and screams “have fun!” at the player, there’s probably not a finer game released this year, but just like protagonist Rico, Just Cause 4 has some major problems.

ONE OF THOSE DAYS

Die Hard‘s John McClane might think he had it bad, but he was never asked to liberate entire islands from evil overlords who are attempting to dictate the population with a machine that controls weather.

Thankfully, as Rico, you have a handy grappling hook, a parachute, and a wingsuit in order to keep you out of harm’s way as you attempt ludicrous stunts and maneuvers, because otherwise our chiselled hero would be flat as a pancake.

Enemies are bullet sponges, and so are you: able to withstand explosions, numerous faceplants, and untold numbers of bullets right in your back as you scoot around the open world, and it’s all great fun, in fairness.

Just Cause 4‘s movement is exceptional. Chaining a grapple into the wingsuit to gain acceleration then more altitude is exhilarating, and scaling mountains and skydiving downward through chasms or skimming rooftops as you pass villages and towns is, put simply, brilliant.

As with previous games, the grappling hook is the star of the game. Good thing too, because the voiced characters are personality vacuums and can’t carry the game on their shoulders.

You can fire your grapple at any object and link it to another, causing wanton destruction that will have you smiling from ear to ear.

New to this entry is the ability to mod your tools and add a Metal Gear ‘Fulton’ style balloon to lift people and objects into the air. Not enough? Fine, you can also add a jet boost to the balloon and make them do things that, in other games, would look like a glitch.

Still not enough? How about modding those tools to withstand enemy damage, or make a balloon full of helium, or even change the speed at which your jets accelerate. This is a ridiculous game that revels in the the insanity you, the player, can create with its toolset.

Feel like grappling an enemy to a car and sending the car into orbit? That’s fine. Pop a fulton balloon on the car, then grapple the guy to the car with the retract mod, and away they go. It cannot be emphasised enough how satisfying it is, and the generous auto-aim helps you target people as well as helicopters.

The much-advertised weather effects take a while to arrive, because missions gate progress quite significantly, but trying to wingsuit through a lightning storm is a tense affair regardless. Every bolt that hits the ground is a reminder that Rico is tough, but not immortal.

Likewise, a tornado whipping through the lands is destructive in a way that, frankly, simply hasn’t been seen before. As it sucks up aeroplanes and, well, pretty much everything in its path, it’s hard not to be impressed by what is being rendered on-screen.

But Just Cause 4 doesn’t impress right off the bat. A slow start and confusing mechanics – a potential overload of info – means you have to concentrate in a title that revels in the absurd instead.

Don’t think you’ll be spending the entire game with the new weather stuff, either, it was over 12 hours before I hit my first proper mission involving it.

At least the weaponry is creative, though. The guns often offer a secondary fire involving explosions, or at the very least a grenade of some sort.

The lightning gun in particular is fantastic, shooting an arc of electricity into your foes, and even the wind gun is a blast (pun intended). It never gets old blowing enemies away (and again) and seeing half the environment disappearing with them.

Helicopters remain a highlight of the series. Raining missiles from above and taking out bases full of helpfully coloured red and white “bad guy base things” is rewarding, too. They’re so gloriously destructive, and capturing one by grappling to it and yoinking the pilot out is too tempting an opportunity to pass up.

That’d all be well and good, and it’s nearly enough to recommend you rush out and buy Just Cause 4, but the story missions are just terrible. It’s bizarre that a game with such creative movement abilities and chaotic tendencies plays it so safe with the missions and overall structure.

Because you’re leading a rebellion, you progress the story by doing a story mission in a controlled zone, upgrading your army, and pushing forward. But goodness, these missions are sorely lacking in ideas.

Some variation would help, but when you’re defending a wide open platform while a remote hack plays out (again), and ragdolling around because you simply have no cover and cannot take to the skies (it’s too far from the hack), you end up tearing your hair out with frustration.

Worse still, if you have to go somewhere to unlock a door, it’s likely you’ll have to repeat that again multiple times in the same mission. Enemies seem to endlessly respawn until an arbitrary point after a mission is complete, and are even able to appear behind you.

These enemies are firing rockets or using sniper rifles, and while you have a generous health pool, you just eventually run out of time to recover. Things like this make Just Cause 4 feel a little unfinished.

While the story is forgettable, the cutscenes aren’t. For some reason they are rendered in a muddy, almost sub HD video quality. It’s crazy to see this in a 2018 game from a big budget publisher, it really is.

These scenes are sometimes lengthy, too, and when they start a mission that has you driving two awful AI comrades around who have to stop and shoot targets, and then slowly get back into the car to rinse and repeat, it sours the whole experience.

Quite why, in a game where you can basically fly, the developer thought it’d be a good idea to ground you in a car for missions in this manner, is beyond my comprehension.

Thankfully this new game has improved markedly on the previous title in terms of performance, and it runs at a smooth framerate, with quick loading. It looks lovely in spots, while the all-important explosions look great.

Like a fine wine, Just Cause 4 improves with time. Spend an hour with it and you’ll wonder why they made a new game in the series at all, but give it your proper attention and you will be customising your grappling hook to create experiences you just won’t see in any other game.

The trouble is, once that open-world-fun dissipates, there’s a game to play, and so many of the missions that progress the story are dull, overly long, and filled with bullet-sponge enemies that make it a bit of a slog to push through.

Just Cause 4 has a huge open world but it’s a little empty of curated content. What remains is a feeling that you should “make your own fun”, and that’s great while it lasts, but you’re left wanting that creativity throughout the rest of the game, and instead, you’re left with repetitious missions and a story you just don’t care about.

Brilliant open world movement and open-world fun, but a poor story and badly designed missions stop Just Cause 4 from truly delivering on what it could have been.