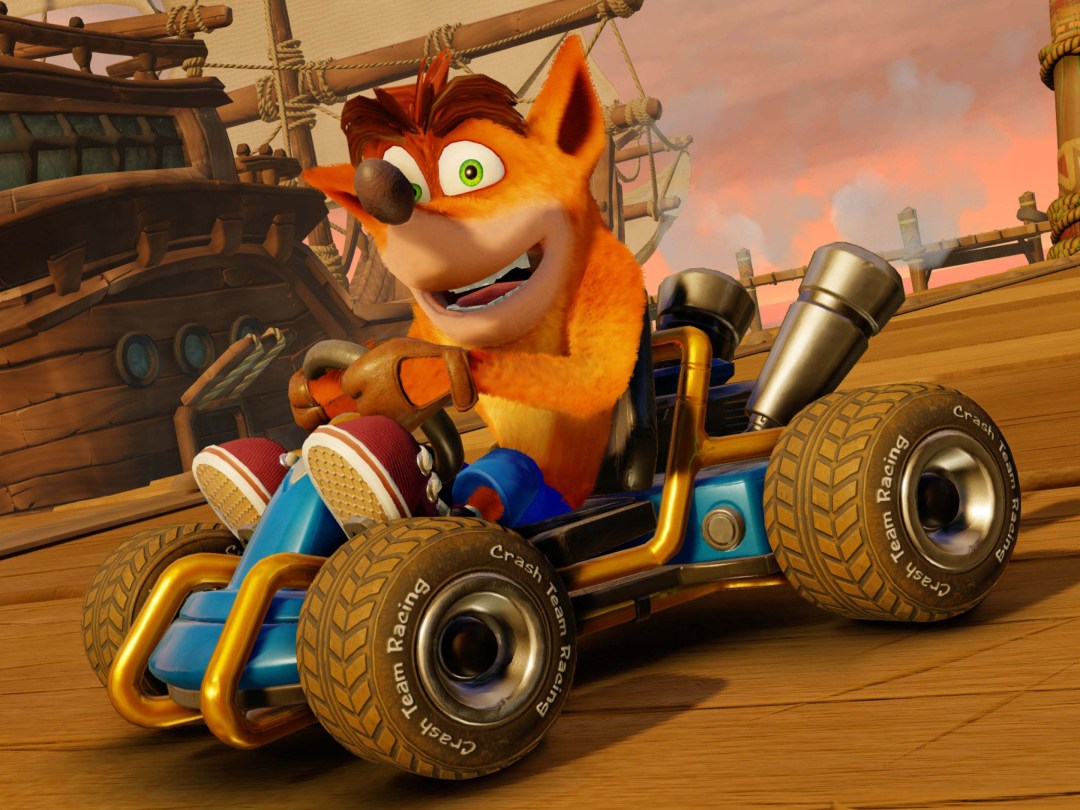 After the ridiculous success of the Crash N. Sane Trilogy, Activision’s accountants (presumably) desperately scoured the archives looking for something else to restore the company to financial glory, and came up with a 20-year old kart racer that almost every PSOne owner swears is better than Mario Kart.

And once again, the troops at Beenox have lavishly recreated this ageing hunk of 240p triangles and brought it right up to date in stunning fashion. Beautiful visuals, lighting, added online play and customisation all bring Crash Team Racing screaming into the modern era, and while it can’t quite escape the antiquated nature of its 20-year old design, this is still one of the strongest kart racers on the market, and quite possibly the best without a certain M-hatted plumber at the wheel.

The core of Crash Team Racing Nitro-Fueled experience comes from its surprisingly deep Adventure mode. It’s a jaunt through 17 of the game’s 31 tracks (the rest are from the less-loved PS2 sequel Crash Nitro Kart), with a pseudo open world to scoot around in between races. I

It’s a direct lift from Diddy Kong Racing, if you’re old enough to remember that N64 Rare classic, but it feels like a breath of fresh air these days, especially when Mario Kart 8 Deluxe has no real campaign to speak of.

This is a project fueled by nostalgia (and nitro), though, so be warned: Crash is no longer for the kids. The Adventure mode is excruciatingly difficult from the get-go, with progress only made when you win each race outright. Given the crafty and malicious AI who’ll happily blast you with a well-timed missile just as you’re mere centimeters from the finish line, expect a few twisted DualShock 4s and more ‘select’ utterances as you grind through to the later stages.

If you’ve got the patience, this is a beautiful recreation of the original’s Adventure, now with the ability to change characters throughout, and a tonne of customisation options to give you a sense of reward when you’ve just finished 2nd for the 17th time in a row.

SLIDING INTO YOUR RPMS

Despite only running at 30fps, Crash Team Racing does feel like a typical kart racer – light, nippy, action packed and chaotic.

Where it pulls away from the pack, though, is in its clever powerslide mechanic. Like Mario Kart, you can hop into a slide around any corner (weirdly, I couldn’t figure out how to do this at my local Krazy Karts. Maybe I’m too heavy), but instead of just charging a boost by sliding, you have to time a second shoulder-button press as a turbo meter fills up. This can be triple-chained for maximum impact, and also has an active-reload timing system too, so if you truly nail all three boosts in a chain, you’ll fly off at tire-scorching pace.

And you’ll need to, because the AI is not going to let you off lightly. It’s a great system only hampered by the old-fashioned physics underpinning the whole game. The slides themselves lack weight and torque, and the whole handling mechanic just can’t compare to the glorious Mario Kart 8 and it’s flawless drifting, but this is still a serious skill curve that will quickly separate the skilled from the also-rans.

Beenox has included online play, with private matches and a fairly basic matchmaking system already in play. It currently seems like players are having trouble connecting, though, as it can take a good four or five minutes to only half-fill a lobby ( and given the game’s success at retail, this shouldn’t be the case), but once on the track, it’s surprisingly slick.

Oddly, karts can’t crash into each other, presumably to lessen the load on the netcode, but the game’s I played were smooth and lag-free, and weirdly, the human opponents were nowhere near as good as the game’s AI! Playing online (or in the various Arcade modes) will let you enjoy the various tracks far quicker than grinding through the Adventure mode, too, and considering their age, they’re an impressive selection – all designed around the powerslide and jump-boost mechanics.

It’s pad-rippingly difficult at times, and the track design does show its age when compared to Mario Kart 8 or Team Sonic Racing, but Beenox has done a fantastic job in updating this much-beloved racer.

This is definitely a project for players who are desperate for a dose of nostalgia this summer, though, as youngsters schooled on Mario Kart will likely rage quit before they ever get the hang of the game’s slick power-boost systems. For 90s kids who’ve already smashed through Spyro and cleared Crash’s N Sane trilogy, though, Crash Team Racing Nitro-Fueled is a must.