Audeze has pulled it off, though. It’s the first company in the world to squeeze planar magnetic drivers into a pair of buds, instead of bulky on-ears or listen-at-home over-ear cans.

There’s a catch, of course. The iSine 10s are colossal compared to your regular old in-ears, sitting more outside your ear than in it. Get used to the fit, though, and these are some serious sounding headphones.

The buds fall somewhere between “stylised Millennium Falcon” and “spider’s web”, with a flashy geometric pattern, black finish and silver accents. Yeah, they look bling-tastic, and you’ll easily turn heads if you wear them out in public.

That’s kind of the idea, though, so you’ll have to suck it up and ignore the stares – or invest in a hat.

You’d think such sizeable buds would weigh a ton (especially with that planar tech inside) but the iSines don’t drag your ears down. I reckon they could stand to put on a few grams, too – it’s not like they feel cheap, but a bit more weight would make them that little bit more luxurious.

The wing tips that hook over your lugs are still worth strapping on, though. The version I tried wasn’t quite the final fit actual customers will get, but they do the job and make sure you aren’t constantly popping them back in your ears.

Pop a pair of Comply foam tips on the buds, get a firm seal, and the oversized shape starts to make sense.

Planar magnetic tech basically cuts out any chance of distortion, giving high-end notes a delicious crisp and clear tone. Even if you listen at near-deafening levels, tracks shouldn’t ever sound sharp or shrill.

There’s plenty of bass, too. A lossless version of Jamie Woon’s Night Air had real depth, without dominating the rest of the mix.

If there’s one casualty, it’s the mid-range. The rousing chorus of Tracy Chapman’s Fast Car sounds fantastic, but the vocals don’t sit on top of it all. You won’t notice it on electronic tracks, but serious sound fans might miss a little clarity in acoustic songs. The on-ear Sine cans had a similar sound signature, and I still loved those, so don’t think this is a deal-breaker.

I’ll need to pit them against a set of traditional in-ears with multiple drivers to see how they stack up, so stand by for a final verdict.

You’ll even be able to appreciate the detail on hi-res tracks if you’re listening through an iPhone – like their bigger on-ear brothers, the iSine 10s have a Lightning cable instead of a 3.5mm audio jack.

That means you can plug in right now on an iPhone 6s, and won’t be out of luck when Apple ditches 3.5mm for the iPhone 7.

The cable has its own built-in DAC, too. It’ll take over playback duties from the phone, so you’re getting the best possible quality.

Android owners don’t have to worry, though. Audeze told me a 3.5mm cable would be in the box, and you’ll be able to swap them whenever you like. Handy if you don’t just listen through an iPhone.

I’m always up for playing with a world’s first, and if it’s going to make my music sound better, I’m all for it. I’m just not sure I want my fellow commuters to think I’m about to take on the Kessel run.

From what I’ve seen and heard, the iSine 10s sound fantastic – when fed with a hi-res source and running DAC duties through its own cable. But then you’d expect as much for €449. The big question is whether they sound as good as a similarly-priced buds that actually fit in your ears.

Unfortunately we’ll have to wait until October to find out. As soon as I get a pair, I’ll let you know if they’re worth the hype.

READ MORE › The 10 best headphones in the world right now 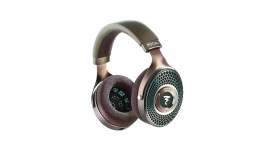