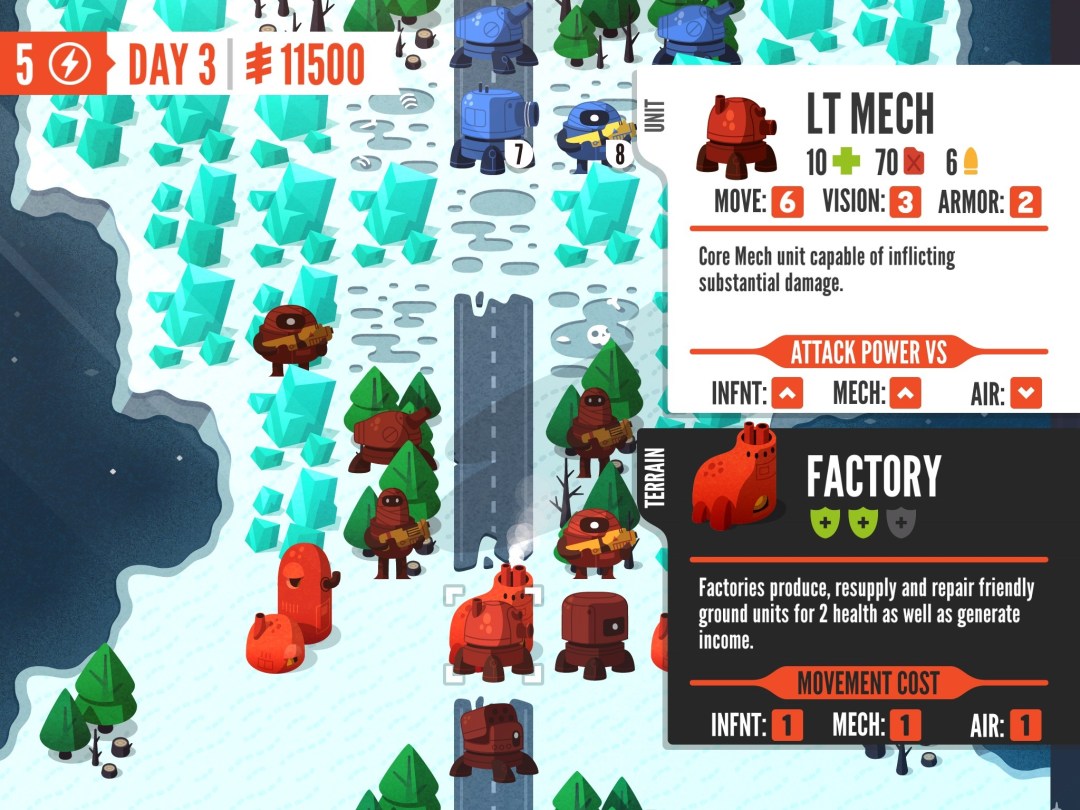 When Nintendo revealed it would finally start making mobile titles, plenty of people must have secretly hoped for a new Advance Wars. Instead we got Miitomo. Fortunately, Risky Labs has filled this particular turn-based strategy hole with Warbits — and it’s superb.

To any Advance Wars fans — or indeed, enthusiasts of turn-based strategy games in general — Warbits will seem quite familiar. Factions duke it out on grid-based maps, lobbing projectiles at each other until one side emerges victorious. In a sense, then, Warbits is perhaps lacking in imagination, but it’s infused with so many great details, and the execution is so polished, that you just won’t care.

War of the tomatoes

From the off, the game has a quirky sense of humour, involving two armies at loggerheads, arguing over such thorny issues as whether tomatoes are fruits or vegetables. This flippant take on combat, and the conceit that all disputes are happening inside a simulator, is even more cartoonish than anything Nintendo itself might try; but the irreverence is charming, and offers a counterpoint to the brutal AI.

And this really is a game that pulls no punches. The single-player campaign mode boasts 20 missions across five environments, and gradually introduces you to the game’s concepts. You are taught about the relative strengths and weaknesses of a diverse array of units, taking advantage of captured factories, cities and airfields, and efficient management of your bank account.

Around mission eight, Warbits merrily punches you in the face, punishing complacency, arrogance, and any suggestion you will waltz through unscathed. This might look like a casual title, but you soon realise you can’t just pile in. Instead, you soon take on the guise of a master tactician, working out how to fight across multiple fronts, take advantage of choke points, and protect captured areas and vulnerable units while simultaneously eradicating the enemy.

The idea of the campaign is to toughen you up for taking your skills and newfound knowledge about tomatoes online. In all, 40 maps are available, ranging from the fragmented frozen islands of Iceberg to the aptly named Knife Fight, a tiny arena that quickly forces opponents to square off. The only downside to online battles is they can drag if you’re playing a laggard. (You get up to two days to play a turn.) However, you can have multiple games running at any given time, and can also rope in the computer AI if you’re not keen on battling strangers but have no friends with taste (in the sense they don’t yet have Warbits installed).

Concessions to mobile are few in number and all seem to benefit Warbits. This is in many ways a tighter, more focussed game than Advance Wars, with an emphasis on speed. Battles happen immediately, without cut-scenes, sometimes putting you in mind of a quickfire Civilization or mobile classic Outwitters. Pleasingly, the entire game also looks superb, from the dinky units that remain crisp and distinct on the iPhone, to the bleepy and colourful interface menus.

Given that this is also a pay-once premium title, we reckon the only reason not to buy Warbits is if strategy games make you want to hurl your device into the heart of the sun. If you’re a fan of the genre, you’re in for a treat.

Warbits is available for iOS from the App Store.

Welcoming yet tough; bright and breezy yet deep. Warbits is a polished, balanced, smart, engaging and essential turn-based strategy game for iOS.

Plenty of variety and depth

Great for solo and multiplayer

Pay once and no IAP

AI can be a bit brutal