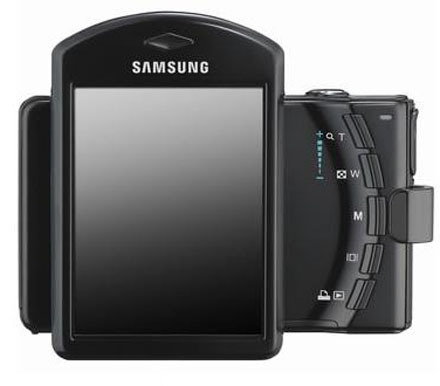 Samsung’s been blowing us away with the design of its compact cameras of late. From the svelte NV3 to the iconic NV7, it’s been love at first black metallic caress.

The i7 is part of it’s ‘other’ range of, so far, eminently forgettable cameras. Who could remember the i6 – the first digicam with a built-in media player – or how about the ‘classic’ i50 and its MP3 feature? Thought not.

Clearly the i7 has a lot to prove – and it’s doing it with more gimmicks. The MP4 playing PMP is there, now with a three-inch touchscreen. Not only that, it’s a revolving touchscreen. Pretty wild, huh?

How does it all work? Well it ‘turns’ out that the revolving screen is actually how you turn the i7 on. Twist it 90 degrees and the media player fires up, a full 180 and you’re in camera mode.

The PMP is no iPod replacement. Tracks are listed by filename in the order they were dragged into the MP3 folder. At least it sounds better than the decidedly average i6, and for video the screen’s a big improvement, both in size and quality.

Strangely, there’s also a text-based World Tour Guide with a map interface and cheesy airplane animation. Scottish, Welsh and Northern Irish owners will be thrilled to discover that the whole of the UK has been labelled ‘England’, while Londoners will be interested to learn that they set their watches to the chimes of Big Ben. As for the entire continent of South America, don’t bother – it’s been missed off. Sorry Machu Picchu, you didn’t make Samsung’s cut.

The camera-activating swivel can be done manually or using our preferred ‘nudge’ method. One tap and the spring-loaded mechanism whips the screen round the full 180 at breakneck speed.

After that things get a little slower. We timed a laborious five seconds from whip-round and power-up to actually taking a shot. The zoom is sluggish and the autofocus is prone to wandering. Worse still, the face recognition seems to miss more faces than it ever finds.

And yet, and yet, the final results are actually quite pleasing. They’re well lit and colour is good. Noise isn’t too much of a problem and the Advanced Shake Reduction actually seems to work – despite the lack of a proper optical stabiliser. Video’s good too, though the headline 800×592 resolution is only 20fps so stick to the standard 640×480 res at the smoother 30fps.

Trouble is, it’s just such a pig to use. The revolving screen is a faff once the initial amusement is over – and you have to do it each time you want to shoot. The touchscreen menus are simple enough, but the zoom buttons on the camera itself are narrow and fiddly. And the whole thing is just too heavy – a full 210g with the battery.

If you enjoy weightlifting, have a penchant for pointless gimmicks and don’t mind too much if your camera’s slower than a Sunday stroll, then maybe this is the one for you. Otherwise, save your pennies and go for the far more stylish NV3. It does nearly everything this cam does – without the need for the song and dance.