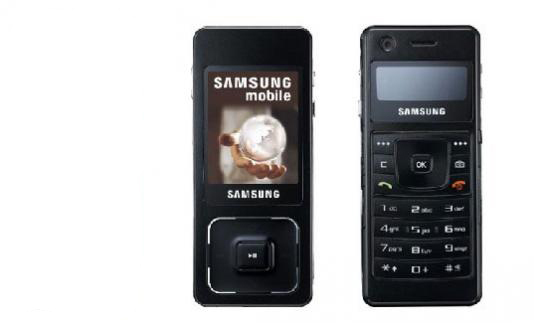 Samsung is no stranger to phone innovation. Its M100 was the very first MP3-playing mobile, the A300 was the first to sport a dual-display and the i300 recently rocked up with the first built-in gigabyte hard drive. Throw in the current Ultra series – the thinnest phones in the world – and you can tell Samsung craves the headlines.

Its latest creation, the F300, sports another genre-busting design – a two-faced ‘flipper’ format. But will it catch on like the clamshell, slider and candybar formats, or head straight into the Gizmondo’s gadget graveyard?

First impressions are good. The F300 is the newest member of the weight-watching Ultra range, which means it has a staggering 9.4mm waist and weighs a floaty light 77g. It’s surprisingly robust too – the phone is completely sealed with no battery cover, and this combined with the metallic fenders running along the sides and bottom makes it very hardy.

Unfortunately, the design of the phone side is frankly snoresome. Its looks are seriously hampered by a two-line calculator-esque slot display that makes it a bar steward to navigate, especially when writing and reading text messages. The restrictive display also means that support for Java games and e-mail have been kicked into touch, a real shame.

The music player side, meanwhile, gets all the spoils with a bright, two-inch display. From here you can access the music player, two-megapixel shutterbug, web browser, FM radio and your photos and videos.

Touch-sensitive keys and pads are used to navigate through the menu, but trying to master its combination of long strokes, half swipes and single jabs isn’t easy. Add the extensive network of sub menus – a world away from the iPod’s simple and clean interface – and you have a phone that’s not fun to handle.

The sound of music

Samsung has criminally overlooked integrating a 3.5mm headphone jack, but you can use the supplied adapter to hook up your trusty Sennheisers (the bundled earphones are, naturally, rubbish). An eight band equalizer lets you tinker with the sound and, with good cans, the F300 sounds dynamic with good driving bass.

A mircoSD slot on the side means you stuff the F300 with a 2GB card, which will hold around 1,000 MP3s encoded at 128Kbps. The battery life isn’t bad either: the music player pumped out tunes for just short of eleven hours, although this will time will be reduced using the phone in tandem. Slot the phone into a supplied battery wallet and the juice is doubled.

On paper the F300’s two-faced design looks like a surefire winner but, in reality, too many compromises have been made to accommodate the double header. The biggest problem is user-friendliness – this Ultra music phone is one hell of a slippery customer to operate and this, unfortunately, is its biggest flaw. You’re best served plumping for the Sony Ericsson W880i Walkman instead.