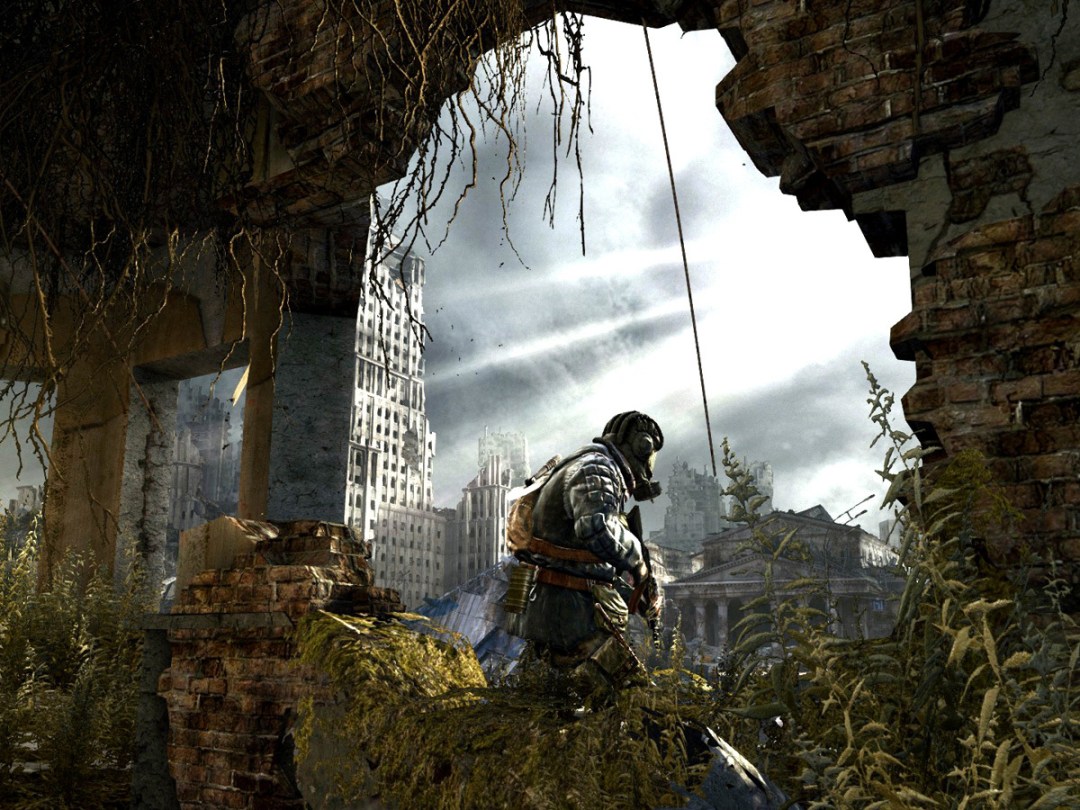 Russian literature has a reputation for bleakness, and Dmitry Glukhovsky’s Metro 2033, the inspiration for this first-person shooter, fits that cliché like a glove.

All-out nuclear war has rendered Moscow an irradiated ruin of broken buildings, rusting vehicles and vicious mutant wildlife. Yet humanity struggles on below the surface, sheltering amid the claustrophobic remains of a Moscow subway where rival factions jostle for dominance. And it is into this shadowy underworld that Metro: Last Light plunges players.

The game casts players as Artyom, a member of the Order faction tasked with capturing the last of an alien-like mutant species that once terrorised the survivors cowering in the Metro system.

Artyom might be the notional star but he rarely says a word. Instead the story and the nuances of the setting are told almost exclusively through the conversations you eavesdrop on during the game. While this might suggest a thin plot, nothing could be further from the truth as the chatter makes the game’s unremittingly bleak world far more real than any number of cut scenes possibly could.

The result is a depressing but believable and – despite the horror – spellbinding world where grime, disease and despair dominate. That subtlety of storytelling makes the several moments of puerile nudity all the more disappointing.

Metro: Last Light’s marriage of first-person shooter and survival horror also complements the atmosphere conjured up by the gritty visuals and dystopian storytelling. At its core the game is a decent first-person shooter that gets the feel of the guns right and keeps the shooting varied by offering a decent range of firearms, each with customisable enhancements.

Last Light is no simple-minded shooter, though. Ammo is scarce and so charging into battle without a care is rarely an option.Instead the game pushes players towards a more stealthy approach that involves sneaking around in the shadows, quietly taking down guards and slipping through areas unseen so that you don’t waste precious ammo.

The survival element is further enhanced by the need to wear gas masks in toxic zones. Masks use filters that run out after a set amount of time and the fear of your filters running dry if you wait around too long underlines the sense of desperation that the game invokes.

As well as having to battle enemy soldiers from rival factions there are plenty of nasty beasts lurking both within and without the Metro, from giant armoured leeches and disturbing spiders to winged beasts that drag you into the air before dropping you onto the hard concrete.

While these beasts lack the smart AI of the human threats, their twisted forms and viciousness is unsettling. There are plenty of ‘what the hell is that thing?!’ moments to put you on edge and the nerve-jangling sounds made by the scratching and grunting of unseen beasts is something that you never get used to.

The only downside is that the beasts often outstay their welcome, making for several moments in which the persistent attacks grate.

Given the survival elements, unreliable gas masks and unrelenting monsters, Last Light can be an unforgiving game, especially on higher difficulty levels. The toughest of all is the Ranger Mode, which the developers say is the way the game was meant be played. It’s a tad more punishing than testing for our tastes but the big problem with it is that you have to pay for it after buying the game, and that, frankly, is just not on.

Looking for multiplayer Metro action? Then you’re out of luck, as Metro: Last Light is single-player only. That’s a shame, since the idea of teaming up with others to make daring journeys across the hazardous surface of Moscow while squabbling over filters for your gas masks would have been fantastic fun. It also sometimes feels overly linear – the opportunity to explore the Metro system at our leisure is one we would jump at. That said, it is something of a testament to the compelling world the game has crafted that you wish there was more opportunity to immerse yourself in it.

Metro: Last Light may be unremittingly bleak, but its world is spellbinding and the desperation invoked by its skilful blend of first-person shooting and survival horror makes for an intense experience.

It might feel too unrelenting at times and you might wish there was more reason to come back to the game than a tougher difficulty level, but for those willing to dive into the dark tunnels of this post-apocalyptic adventure there’s a rewarding – if often mentally exhausting – game to savour.