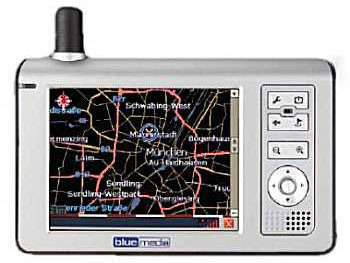 Congestion is now so bad on this wee isle that getting anywhere at an average speed in double figures needs advanced intelligence. Some manufacturers offer traffic data as an annual subscription via download; others as a one-off fee option. The Evesham goes for the latter with free FM radio TMC, a technology for delivering traffic information to drivers.

Alerts come at a cost

In order to provide free traffic updates and speed camera alerts for six months in a device costing £400, Evesham has had to cut corners on the device itself. It’s a Windows CE design that we first saw more than a year ago, with a smaller 3.5in screen and previous-generation GPS antenna. Similarly, memory comes from a tiny 256MB MMC card.

Perhaps as a result of the lower resolution maps, however, route calculation, re-routing and complicated junctions were all dealt with speedily. The TMC service is sporadic, proving better at picking up more epic tailbacks than general urban congestion.

One day, we’ll all have traffic-dodging TMC sat-navs in our cars and we’ll all bump into each other on sneaky back roads and cut-throughs.For now, onl