Toshiba has just come to the smartphone party, with the sharp and sexy new TG01 smartphone unveiled at a swanky London event. Rocking an HTC Touch HD-destroying 4.1in touchscreen and packing the same tech that Tosh uses in their Regza TVs, it’s bound to give Apple and HTC plenty to ponder.

There’s full Flash support, letting you browse the web fully and watch vids, including the Stuff.tv vidcast, unlike the current generation iPhone. And the Apple bashing doesn’t stop there. The TG01 measures just 9.9mm deep, meaning its thinner than both the iPhone and the bulky T-Mobile G1.

You get built in GPS, Wi–Fi, HSDPA, a 1Ghz Qualcomm processor and a keypad that bears more than a passing resemblance to Cupertino’s efforts on the iPod Touch and iPhone.

Sadly there’s not a dose of Android in sight, with Toshiba instead hopping into bed with Microsoft and shovelling in Windows Mobile as standard. Don’t let that put you off though, there’s plenty of neat tricks that’ll make you forget the mobile’s business leanings.

Shake the cell to answer a call and do the same to hang up. Might sound gimmicky, but we loved that very same tech Sony Ericsson’s Walkman phones.

It’s due to land in the summer, with more deets being unveiled at Mobile World Congress in Barcelona in a fortnight. We’ll be there, but in the meantime keep it locked for more first impressions.

ON the meantime, check out our Smartphone Top 10 for the best models currently on the market 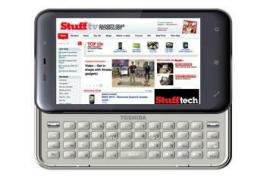 We first heard Sony talking about Transfer Jet, the Near Field Communication standard, at the beginning of last year but now we’ve actually seen it in

Orange has today got official with the Toshiba TG01 smartphone, giving it an official date and price after outing it briefly, and apparently accidenta