We’re in London getting a hands-on with Sony Eric’s amazing new cameraphones, the 3.2 megapixel K790 and K800.

The K790 is the one that has us trembling with excitement – it’s the first phone we’ve seen to sport a proper flash instead of the measly LED lights most mobiles use. The K800’s a 3G imaging maestro.

We’ll have a full report for you later today. In the meantime, here are the pics (they both sport the same design).

Hands on with the Sony Eric M600

Does LG’s new flagship have what it takes to tempt people away from its main Android and iOS peers? 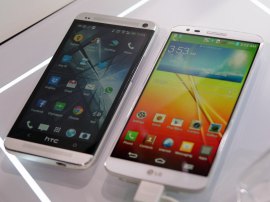 Barely a year since Fossil canned its range of Palm-powered watches it’s back, with an announcement that it’s been working with Sony Ericsson on Bluet

Sony Ericsson’s survey of clamshell mobile buyers threw up a surprising result – behind things like 3G functionality, looks and a decent camera, peopl