Images and details thought to belong to Motorola’s first handset to rock a tag-team combo of Intel’s Medfield chipset and Android 4.0 Ice Cream Sandwich have surfaced on Pocketnow.

We first heard that Android would be optimised for Intel chips towards the end of last year and clapped eyes on Lenovo’s China-bound K800 prototype – the first Intel-powered Android phone – at CES last month. This would make Motorola’s offering the second.

For those unfamiliar with the term, Intel’s Medfield system-on-a-chip has been touted as the company’s make-or-break venture into the smartphone market. Reports have said Medfield prototypes are capable of streaming Blu-ray quality video to a TV. Impressive.

According to those in the know, the Medfield chip has been designed specifically to speed up Android apps and web browsing.  While spec details are thin on the ground, there are rumours that the phone will pack an instant-on camera that can shoot 15 frames per second.

Based on the above renders, it looks like the Android 4.0 UI has been tweaked to work with Motorola’s own user interface – and the phone’s light grey hue is a far cry from the all-black ‘droid devices we’re used to seeing from Moto.

Whether or not we’ll see any Medfield smartphones – including Moto’s efforts – at MWC is anyone’s guess. But what better platform to use as a launchpad for this new breed of Intel-powered devices?

Not just a pretty face 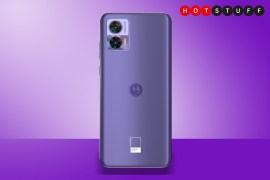 Capable cameras also in the mix 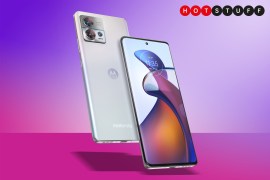