In addition to a bevy of new and updated tablets, Amazon this morning revealed a pair of new Kindle e-readers – including the Kindle Voyage, a new high-end model that sounds truly exquisite.

Why take a trip with the Voyage? The new 300ppi high-resolution display is certainly a standout feature, plus the micro-etched glass screen purports to both remove glare and feel like real paper. Also new: PagePress sensors to the right and left of the screen, which flip the page with a slight press and give a subtle bit of haptic feedback.

The Kindle Voyage is also ultra-thin at 7.6mm (with a magnesium backing), and has a new adaptive front light that senses your reading conditions and adjusts the brightness accordingly.

Amazon’s high-end device (the front model in the image above) is slated to debut on 21 October in the United States for US$199 for a Wi-Fi model with special offers (the Wi-Fi + 3G version is US$269). UK prices have just been confirmed by Amazon as £169 for the Voyage, presumably the Wi-Fi model.

If you don’t need something quite so fancy, Amazon’s entry-level Kindle has been updated with touch capabilities, and also has the Family Library feature that’s coming to the Kindle Voyage and the newly-announced Fire HD tablets. The Kindle sells for US$79 and hits the States on 2 October with a very decent £59 price here in the UK.

As with the tablets, we ought to hear more about a UK launch for both soon. 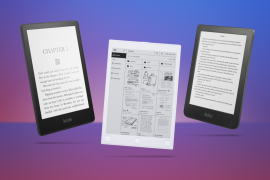 The savings on Apple’s previous generation iPad Air are not ones to miss. 20% off standard models, and 26% off higher spec models. 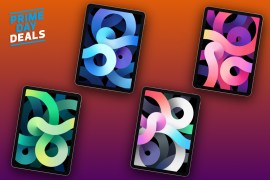 If you’re in the market for a new Android tablet, Nokia has a top deal on the T20 this Prime Day. It’s a no-brainer! 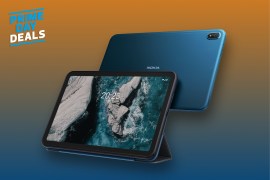