Copycats can move pretty quickly on the web, especially where something as anticipated as the iPhone 5 is concerned, so get that bucket load of salt ready. But the innocent gadget dreamer in us hopes that as we’re nearing an annoncement, even Apple can’t stop the occasional leak.

Instead let’s play Sherlock and look at the pieces of the iPhone 5 puzzle we’ve been presented with over the past week or so. 9to5mac published photos of what looked like the next-gen iPhone casing, in black and white, last week. Then we saw a similar case on Japanese site Macotakara, who decided to up the ante and film the taller glass panel laid on top of the current iPhone design.

Now we’ve got a four minute long video hands on with the back casing, comparing it to the iPhone 4/4S design by parts reseller ETradeSupply. It looks pretty much identical to what 9to5mac were sent i.e. it’s taller than the current design but about the same width, making room for a 4in screen. So it’s the iPhone build everyone wants to see.

ETradeSupply say that it’s a unified middle section and back plate but they’re not sure what the material is, just that it’s not the aluminium and glass we’re accustomed to. The headphone jack gets a new location on the bottom of the handset, the dock connector is smaller (as it was on the original photos last week) making more space for larger speakers, which can only be a good thing, and the SIM tray also loses a few millimeteres.

Chances are we won’t see a WWDC iPhone 5 announcement on June 11th but check out our round-up for more Apple rumours.

IPv6 and what it means for humankind

5 of the best geek holidays

10 of the best sports spectator gadgets 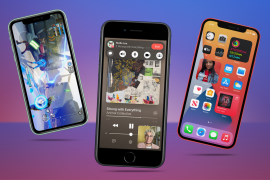